A Horseshoe Crab swimming - GIF on Imgur. Vegans make peace with honey no shut up do... - ¿?¿?¿? . BBC - Earth News - Baby cannibal spider gang makes web vibrate in time. Good vibrations (courtesy of Dr K W Kim) It is like something out of a horror movie: baby spiders devour their own mother, then climb aboard her web, and make it throb in a series of pulsating vibrations. 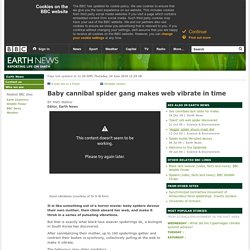 But that is exactly what black-lace weaver spiderlings do, a biologist in South Korea has discovered. After cannibalizing their mother, up to 160 spiderlings gather and contract their bodies in synchrony, collectively pulling at the web to make it vibrate. The behaviour may deter predators. Details are published in the journal Insects Sociaux. Ultimate sacrifice Most spiders are solitary animals. Brochosome. The most common brochosomes A female Homalodisca vitripennis carries on her wings masses of specialized brochosomes (the white spot) to be used during egg-laying. 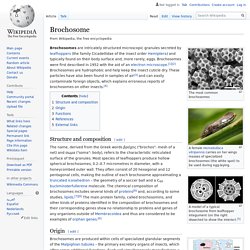 Brochosomes are intricately structured microscopic granules secreted by leafhoppers (the family Cicadellidae of the insect order Hemiptera) and typically found on their body surface and, more rarely, eggs. Brochosomes were first described in 1952 with the aid of an electron microscope.[1][2] Brochosomes are hydrophobic and help keep the insect cuticle dry. These particles have also been found in samples of air[3] and can easily contaminate foreign objects, which explains erroneous reports of brochosomes on other insects.[4] Structure and composition[edit] A model of a typical brochosome from leafhopper integument (on the right dissected to show the interior).[5] The name, derived from the Greek words βρóχoς ("brochos": mesh of a net) and σωμα ("soma": body), refers to the characteristic reticulated surface of the granules. Butterflies and Moths from bronx,NY, USA on June 17, 1964 at 03:13 PM by XAVIER. When I observed this 3 inch creature moving. The body moved like an armadillo in sections a type of exoskeleton. It seemed to have two heads and I could not tell which was th.

In lakes around the world, fearsome creatures attack with strikes that were recently found to be among the fastest in the animal kingdom. 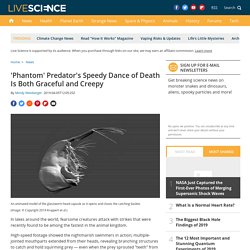 High-speed footage showed the nightmarish swimmers in action; multiple-jointed mouthparts extended from their heads, revealing branching structures to catch and hold squirming prey — even when the prey sprouted "teeth" from its neck. Fortunately for humans, these predators are positively puny, measuring just a fraction of an inch. They are the young of tiny flies in the Chaoborus genus; also known as phantom midge larvae or glassworms, they are so-named for their transparent bodies.

And when researchers turned special cameras on the tiny phantom midge larvae, they discovered that the creatures' deadly attack was among the fastest seen in animals. [Tiny Grandeur: Stunning Photos of the Very Small] Using high-speed video and computed X-ray tomography (CT) scans, the researchers recorded glassworms as they caught water fleas. Azteca ant colonies move the same way leopards' spots form. What could Azteca ants in coffee farms in Mexico have in common with leopards' spots and zebras' stripes? 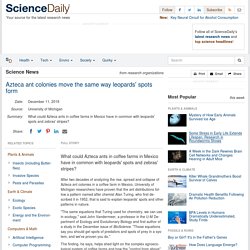 After two decades of analyzing the rise, spread and collapse of Azteca ant colonies in a coffee farm in Mexico, University of Michigan researchers have proven that the ant distributions follow a pattern named after chemist Alan Turing, who first described it in 1952, that is said to explain leopards' spots and other patterns in nature. "The same equations that Turing used for chemistry, we can use in ecology," said John Vandermeer, a professor in the U-M Department of Ecology and Evolutionary Biology and first author of a study in the December issue of BioScience.

"Those equations say you should get spots of predators and spots of prey in a system, and we've proven you do. " The finding, he says, helps shed light on the complex agroecological system of coffee farms and how the "control from above" (focused on pests) model is also more complicated than a predator-prey relationship. This snail with a wasp nest on it : mildlyinteresting.

Stare into the mind of God with this algorithmic beetle generator. “God has an inordinate fondness for beetles,” said, or so it is claimed, the British evolutionary biologist J. 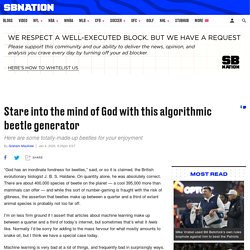 B. S. Haldane. On quantity alone, he was absolutely correct. There are about 400,000 species of beetle on the planet — a cool 395,000 more than mammals can offer — and while this sort of number-gaming is fraught with the risk of glibness, the assertion that beetles make up between a quarter and a third of extant animal species is probably not too far off. I’m on less firm ground if I assert that articles about machine learning make up between a quarter and a third of today’s internet, but sometimes that’s what it feels like. Machine learning is very bad at a lot of things, and frequently bad in surprisingly ways. Despite this video being 100 percent shapeshifting beetles it’s also, somehow, extremely relaxing.