Information, Evolution, and intelligent Design - With Daniel Dennett. Quantum Fields: The Real Building Blocks of the Universe - with David Tong.

Search. Institute for Ethics and Emerging Technologies. Deeper Than Quantum Mechanics—David Deutsch’s New Theory of Reality — The Physics arXiv Blog. One of the unsung heroes of 20th century science is the mathematician and electronics engineer, Claude Shannon, who worked at the famous Bell laboratories during the 1940s, 50s and 60s. 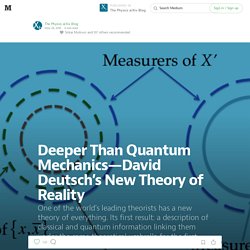 Shannon’s greatest work is the theory of information which he published in 1948 and has since had a profound influence on our world. This theory is the basis for all digital communication. So mobile phones, digital television and radio, computers and the Internet all depend on Shannon’s theory of information. For that reason, it’s possible to argue that Shannon has had a bigger influence on 21st century technology than anybody in history. But there’s a problem his theory of information which has stumped physicists and mathematicians in recent years. But physicists have become increasingly interested in quantum information and its potential in cryptography and in quantum computing. 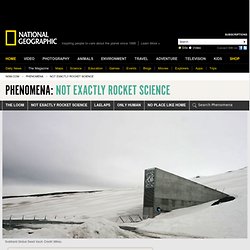 Neither Ewan Birney nor Nick Goldman can remember exactly how they came up with the idea of storing all the world’s knowledge in DNA. They know it happened in the bar of the Gastwerk Hotel in Hamburg, and that many beers were involved. They may or may not have scrawled their ideas on a napkin. “It must have involved a pen or pencil because I can’t think without holding one,” says Goldman. “It would’ve involved a lot of hands from me,” says Birney. Their chat was fuelled by a simple realisation: scientists would soon start amassing more genetic information than they could afford to store. That would be a setback for a normal lab and an outright catastrophe for the place where Birney and Goldman work. After the conference, Goldman and Birney retreated to a local pub and started batting around possible solutions, beers in hand. In terms of information density, DNA outclasses anything we’ve been able to invent.

Why Does the Higgs Particle Matter? Editors' Note: It has been one year since scientists announced the discovery of a particle believed to be Higgs. 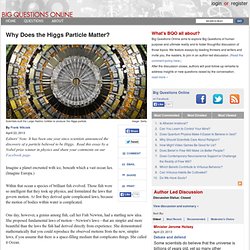 Read this essay by a Nobel prize winner in physics and share your comments on our Facebook page. Imagine a planet encrusted with ice, beneath which a vast ocean lies. (Imagine Europa.) Within that ocean a species of brilliant fish evolved. Those fish were so intelligent that they took up physics, and formulated the laws that govern motion. Front Page - The Long Now.

A Brief History of Intellectual Discussion of Accelerating Change. Origins — The Idea of Progressive Change To consider the origins of the idea of accelerating change, we should briefly go back to a much earlier one, that of progress itself. 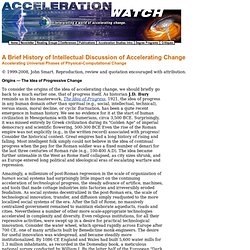 As historian J.D. Bury reminds us in his masterwork, The Idea of Progress, 1921, the idea of progress in any human domain other than spiritual (e.g., social, intellectual, technical), versus stasis, moral decline, or cyclic fluctuation, has been a quite recent emergence in human history. We see no evidence for it at the start of human civilization in Mesopotamia with the Sumerians, circa 3,500 BCE. Surprisingly, it was missed entirely by Greek civilization during its "Golden Age" of imperial democracy and scientific flowering, 500-300 BCE Even the rise of the Roman empire was not explicitly (e.g., in the written record) associated with progress!

During the Middle Ages, the great rich-poor divides of the Roman era were flattened back to more equitable social structures. Adams was the great-grandson of U.S. Mark Blyth: Austerity - The History of a Dangerous Idea. Welcome to Less Wrong. Edge : Conversations on the edge of human knowledge. What it's Like to be an Atheist.

What it feels like to be an Atheist I've always been an atheist, I know nothing else. 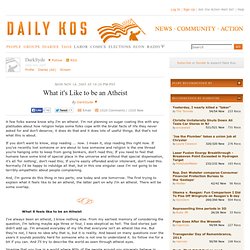 From my earliest memory of considering the question, I'm talking maybe age three or four, I was skeptical as hell. The God stories just didn't add up. I'm amazed everyday of my life that everyone isn't an atheist like me. But they're not, I have no idea why that is, but it is reality. Spacetime - Einstein's Relativity, Space, Time, Quantum Gravity, Quantum Physics, and the Existence of Time. Introduction to the Spacetime Continuum, Einstein's Relativity, and Quantum Theories for beginning and advanced visitors, with Links to the Best Websites on Quantum Gravity, Higg's Boson, Dark Matter and Energy, plus a discussion of the possibility that we live in an essentially atemporal universe. 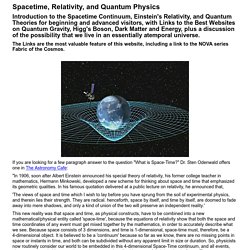 The Links are the most valuable feature of this website, including a link to the NOVA series Fabric of the Cosmos. If you are looking for a few paragraph answer to the question "What is Space-Time? " Dr.