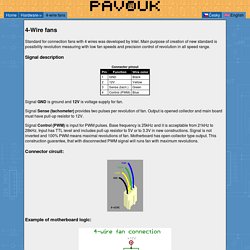 Main purpose of creation of new standard is possibility revolution measuring with low fan speeds and precision control of revolution in all speed range. Signal description Signal GND is ground and 12V is voltage supply for fan. Signal Sense (tachometer) provides two pulses per revolution of fan. Output is opened collector and main board must have pull-up resistor to 12V. Signal Control (PWM) is input for PWM pulses. Connector circuit: Example of motherboard logic: Diode D1 protects PWM output from motherboard in case, that fan has pull-up to +5V and motherboard logic is on +3.3V.

Input TACH includes pull-up to +12V and next voltage ratio box, which guarantee on the I/O board logic around 2.3V (logical 1). Example of 4-Wire fan I had in hand fan NIDEC F09A-12B3S1, which is supplied with boxed Intel processors. Photographs Top view Nidec inside With heatsink Links Conclusion.

Weather. Interactive Weather Map and Radar. LeanPub. Python for Scientists… by Shantnu Tiwari. Learn Python via Cool Projects The Python for Scientists and Engineers course, based on my highly successful Kickstarter, seeks to teach you advanced Python by building awesome projects. 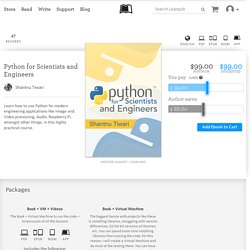 Practice, not theory The course will be heavily practical, with little or no theory. The goal is to get you using Python for real world engineering applications. For each topic, we will choose a real case scenario and build a quick solution in Python to solve our problem. These are the topics we will cover: Introduction to Python I will cover the basics of the Python, specifically for the programmers wanting to use Python for engineering.This will be a quick introduction to Python for people who know at least one other programming language.

Image and Video processing Detect faces in images and videoCount objects in an imageDetect color of a shirtDetect Motion Audio Create a sine wave, find its frequency, simple filtering Analysis and plotting with Numpy, Scipy and Matplotlib Machine Learning. 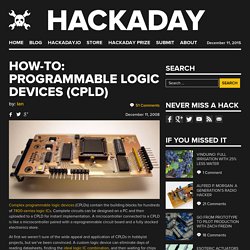 Complete circuits can be designed on a PC and then uploaded to a CPLD for instant implementation. A microcontroller connected to a CPLD is like a microcontroller paired with a reprogrammable circuit board and a fully stocked electronics store. At first we weren’t sure of the wide appeal and application of CPLDs in hobbyist projects, but we’ve been convinced. A custom logic device can eliminate days of reading datasheets, finding the ideal logic IC combination, and then waiting for chips to arrive. Circuit boards are simpler with CPLDs because a single chip with programmable pin placement can replace 100s of individual logic ICs.

Kalman Filter for Dummies. Now let's try to estimate a scalar random constant, such as a "voltage reading" from a source. 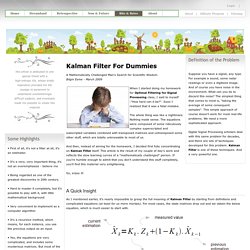 So let's assume that it has a constant value of aV (volts) , but of of course we some noisy readings above and below a volts. And we assume that the standard deviation of the measurement noise is 0.1 V. Now let's build our model: As I promised earlier, we reduced the equations to a very simple form. PortFolio de Miguel Ángel de Frutos. MultiMeter. Hakko Soldering Station. Learn.adafruit. The Adafruit FONA 808 is an amazing little breakout board that integrates not only a GSM/GPRS chip, but also a GPS on the same board. 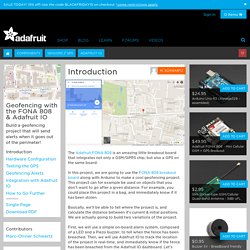 In this project, we are going to use the FONA 808 breakout board along with Arduino to make a cool geofencing project. This project can for example be used on objects that you don't want to go after a given distance. For example, you could place this project in a bag, and immediately know if it has been stolen. Basically, we'll be able to tell where the project is, and calculate the distance between it's current & initial positions.

We are actually going to build two variations of the project. Example 1: No Optimizations. This example demonstrates the basic WiFi datalogging hardware. 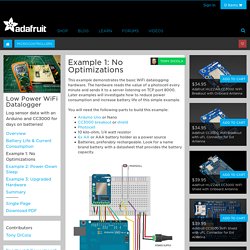 The hardware reads the value of a photocell every minute and sends it to a server listening on TCP port 8000. Later examples will investigate how to reduce power consumption and increase battery life of this simple example. You will need the following parts to build this example: 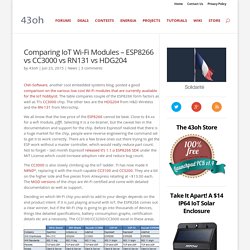 The table compares couple of the ESP8266 form factors as well as TI’s CC3000 chip. The other two are the HDG204 from H&D Wireless and the RN-131 from Microchip. We all know that the low price of the ESP8266 cannot be beat. Comparing IoT Wi-Fi Modules – ESP8266 vs CC3000 vs RN131 vs HDG204. NRF24L01+ 2.4GHz. Logic Analyzer. Untitled. Buy GrovePi+ [103010002] SmartArduino - Oscilloscope Specializing in Arduino compatible development boards and modules, oscilloscopes and other Electronics.