Tutorials. Multiple BSSIDs with DD-WRT - Interactive HowTo. I have seen several HowTos, tutorials, and forum posts about how to setup multiple (B)SSIDs using DD-WRT and although most of these write-ups indeed helped creating multiple SSIDs, none gave me an actual working virtual SSID. 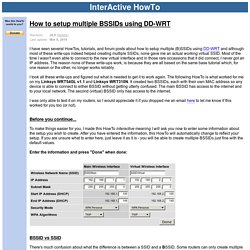 Most of the time I wasn't even able to connect to the new virtual interface and in those rare occassions that it did connect, I never got an IP address. The reason none of these write-ups work, is because they are all based on the same base tutorial which, for one reason or the other, no longer works reliably. I took all these write-ups and figured out what is needed to get it to work again. The following HowTo is what worked for me on my Linksys WRT54GL v1.1 and Linksys WRT310N. It created two BSSIDs, each with their own MAC address so any device is able to connect to either BSSID without getting utterly confused.

I was only able to test it on my routers, so I would appreciate it if you dropped me an email here to let me know if this worked for you too (or not). VPN Pricing. 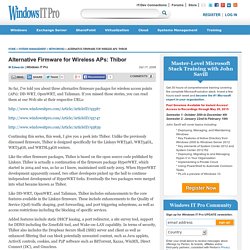 If you missed those stories, you can read them at our Web site at their respective URLs: Continuing this series, this week, I give you a peek into Thibor. Unlike the previously discussed firmware, Thibor is designed specifically for the Linksys WRT54G, WRT54GL, WRT54GS, and WRTSL54GS routers. Like the other firmware packages, Thibor is based on the open source code published by Linksys. Thibor is actually a continuation of the firmware package HyperWRT, which started in 2004 and was, as far as I know, maintained until early 2005. How do you install DropBox on your QNAP? So you use DropBox on your PC’s, Laptops, Cellphones, so why not on your QNAP NAS? 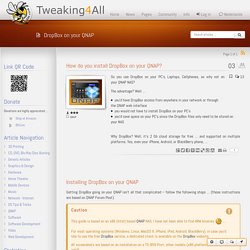 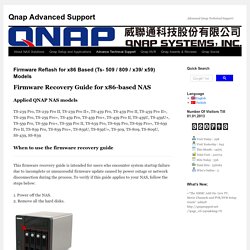 To verify if this guide applies to your NAS, follow the steps below: 1. 3. 4.

Free and Open Source Android App Repository. Interoperability, Browser & Cross Platform Testing. QNAP NAS Memory Upgrade Guide - Quick tutorial on increasing your RAM. As most of you know, when you purchase your very first QNAP NAS, most of the units come with upgradeable memory. 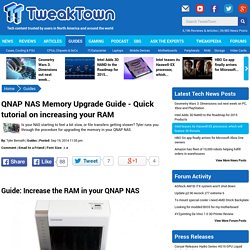 While the procedure to upgrade the memory will differ by model, in the most basic of terms, this article will serve as a general guide to upgrading memory. The NAS we are using today is the QNAP TS-451. The TS-451 is the first NAS I have seen from QNAP to offer an easy solution to opening up the enclosure for the memory upgrade procedure. On older NAS units or Pro models with the metal casing, you will want to start off by pulling all the screws off the rear panel. For the TS-451, you will need to pull a few screws to release the rear panel, of course they have put the warranty void sticker over the chassis at bottom left in the image.

Once you get your NAS open, it will look similar to this. Seen above are the screws you will need to remove to get at the motherboard for the TS-451. How to install plugins in Etherpad. Virtualization for the Small Network - Part 2. Thu, 21 Feb 2008 04:25 Doug Reid Introduction In my last article, I discussed various technologies from companies including VMware, Virtual Iron, Citrix, and Microsoft. 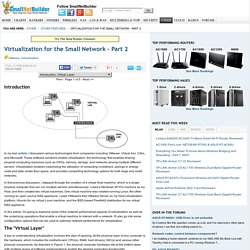 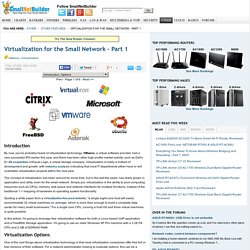 VMware, a virtual software provider, had a very successful IPO earlier this year, and there has been other high profile market activity, such as Dell's $1.4B acquisition of Equal Logic, a virtual storage company. Virtualization is really a hotbed of development and growth, with industry analysis indicating that most IT departments either have or will undertake virtualization projects within the next year. The concept of virtualization has been around for some time, but in the last few years, has really grown in application and utility, even for the small network. How to import and export virtual machines (VM) to/from Virtualization Station (including importing virtual machines from on-line VM markets) ?

What is the function of import and export? 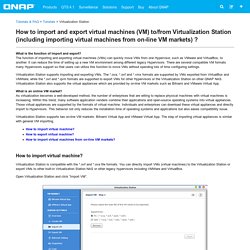 The function of importing and exporting virtual machines (VMs) can quickly move VMs from one Hypervisor, such as VMware and VirtualBox, to another. It can reduce the time of setting up a new VM environment among different legacy Hypervisors. There are several compatible VM formats many Hypervisors support so that users can utilize this function to move VMs without spending lots of time configuring settings. Virtualization Station supports importing and exporting VMs. The *.ova, *.ovf and *.vmx formats are supported by VMs exported from VirtualBox and VMWare; while the *.ovf and *.qvm formats are supported to export VMs for other Hypervisors or the Virtualization Station on other QNAP NAS.

How to link iSCSI targets to VMs of Virtualization Station? What is iSCSI? 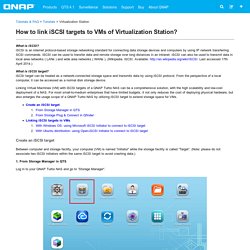 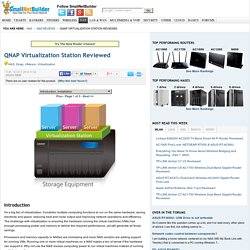 Debian Installation On QNAP. From QNAPedia Overview Things you need to know prior to installation. Debian installation is standalone and WILL ERASE ALL the existing files/data on the current hard drive as well as QNAP firmware resides on the flash memory. Therefore you have to make a backup of data on your hard disk prior to installation. Detailed information on how to backup your existing data on disk or flash partitions can be found here. Debian now available for QNAP NASes. Thu, 19 Feb 2009 06:12 Tim Higgins Products supported include the TS-109, TS-209, TS-409 series and TS-409U. Debian Linux on the QNAP NAS can serve as an alternative to QNAP's factory firmware. Debian can be easily installed and customized with "thousands of popular software packages". Visit QNAP for a Debian on QNAP NAS installation guide.

The Big Picture. QNAP Turbo NAS Software User Manual. File Storage & Sharing. Access your QNAP NAS remotely via WebDAV. What is WebDAV and how can one benefit from it? WebDAV (Web-based Distributed Authoring and Versioning), is a set of extensions to the HTTP(S) protocol that allows a web server to appear as a standard network drive. With WebDAV support, the QNAP NAS user will be able to access the share folders via HTTP/HTTPS protocol remotely.

WebDAV clients are native to Windows XP/Vista, Mac OS X, etc. You can simply mount the network drives (web folders) from one of these operating systems to one or several share folders on the NAS. A WebDAV server benefits from the HTTP infrastructure in the following ways: Advanced Folder Permissions on QNAP NAS. Advanced folder permissions is a feature of QNAP NAS provided for you to configure the access control of users and user groups to the folders and subfolders. You can manage folder permissions from Microsoft Windows or the web-based management interface of the NAS without complicated procedure. Remote acces (map network drive) Drixor wrote:Hello, I have a qnap 412 and I have mapped network drives locally works perfect.But I want these network drives to work on my laptop where ever I travel, I tried mycloudnas.comI got access to the web server from internet.I'm quite new to this.

I just want an simple solution to thisviewtopic.php? T=35566I've read this and I still can't get it to work.Very similar problem. Raspberry Pi as a VPN Wireless Access Point. The following post explains how you can turn a Raspberry Pi (RPI) into a wireless router that connects to the Internet over a VPN. By plugging this into your existing wireless router, you give yourself a second wireless network, and any devices connected to this network will access the Internet over the VPN. This is especially useful for: Punch VPN. PPTP: Point to Point Tunneling Protocol SSTP: Secure Socket Tunneling Protocol L2TP/IPSecure: Layer 2 Tunneling Protocol over IP Secure CISCO IPSecure: IPSecure with XAUTH OpenVPN: Open VPN SSL/TLS Support of 5 VPN protocols ensures universal connectivity with any VPN provider. AsusWRT - OpenVPN Setup (v1, 3.0.0.4.270.24 Merlin) – Hide My Ass! Support. Note: There is a tutorial for the latest Merlin firmware (376.47) available.

We recommend to update to this version and use this tutorial instead: Install OpenVPN on QNAP – NAS Wiki. Outbound VPN connections. Advanced Home Server. Advanced Home Server. Have you ever wanted to visit the bad part of a nearby large city, park your new SUV on a side street with the keys conveniently hidden under the front seat, dress like you live in a penthouse on Lake Shore Drive in Chicago, and then, just to be sociable, start knocking on random doors so you can meet the interesting locals and make some new friends? If the answer to that question is “Yes!” Then a lot of people on the dark internet would love to be your new friend. Raspberry Pi Tor relay. Install OpenVPN on QNAP – NAS Wiki.

Advanced Home Server. Yes, smart network attached storage (NAS) devices support secure VPNs. An open source product named OpenVPN is installed by default on QNAP, Synology, and Asustor. Configuration is easy and, overall, the process takes only a fraction of the effort required for a Windows oriented SSL VPN. OpenVPN may be activated by simply checking off a box and naming the authorized users. However, since SSL is involved, an additional layer of complication is required to manage SSL certificates.

SSL is much easier to manage on a NAS device than on a Windows server, but it still takes a little effort. The final configuration steps involve a little port forwarding on your router, downloading a configuration file from your NAS device t0 your PC, downloading and installing the free OpenVPN client program, then copying the configuration file into an OpenVPN folder. QNAP_Signage_Station_White_Paper_US.pdf. Utilities. Files.qnap.com/news/pressresource/product/Understand_VMware_VAAI_with_QNAPTurboNAS_v1.0.1_whitepaper_en.pdf. How_to_set_up_QNAP_NAS_as_a_datastore_via_NFS_for_VMware_ESX_4.0_or_above.pdf.