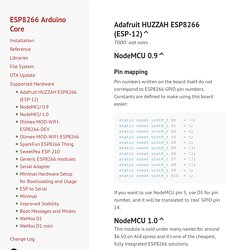 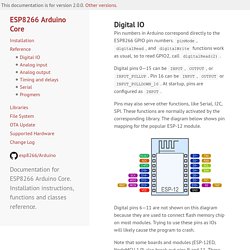 Digital pins 0—15 can be INPUT, OUTPUT, or INPUT_PULLUP. Pin 16 can be INPUT, OUTPUT or INPUT_PULLDOWN_16. At startup, pins are configured as INPUT. Pins may also serve other functions, like Serial, I2C, SPI. Digital pins 6—11 are not shown on this diagram because they are used to connect flash memory chip on most modules. Note that some boards and modules (ESP-12ED, NodeMCU 1.0) also break out pins 9 and 11. Pin interrupts are supported through attachInterrupt, detachInterrupt functions. Reference · ESP8266 Arduino Core. Reference. Supported Hardware. Reference. ESP8266 Thing Development Board Hookup Guide. Favorited Favorite 5 If you’ve used Arduino in the past, there will be some new programming schemes to get used to in ESP8266 land. 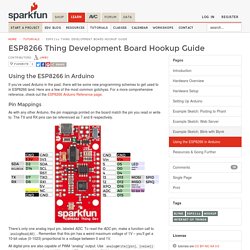 Here are a few of the most common gotchyas. For a more comprehensive reference, check out the ESP8266 Arduino Reference page. Pin Mappings As with any other Arduino, the pin mappings printed on the board match the pin you read or write to. There’s only one analog input pin, labeled ADC. All digital pins are also capable of PWM “analog” output. Yielding This is one of the most critical differences between the ESP8266 and a classic Arduino microcontroller. If you have a long loop in your sketch, you can add a delay([milliseconds]) call within, to allow the critical background functions to execute. The ESP8266 Arduino libraries also implement a yield() function, which calls on the background functions to allow them to do their thing. PinMode(12, INPUT_PULLUP); while (digitalRead(12) == HIGH) yield(); Serial.println("Button is pressed! ") ESP8266WiFi Class Deep Sleep.

An inexpensive IoT enabler using ESP8266. A major component of or rather the very concept, Internet of Things, is about how to connect various devices to the network so that they can both send data and receive commands. 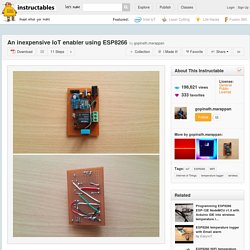 Various technologies to address the last mile connectivity, such as bluetooth, wifi, NFC, etc... already exist, but most of these are complicated to deploy and often need additional hardware such as a local control server or appliance. In this instructable, I show you how to build and configure a simple standalone board that with the help of a wifi network can send environmental data to the internet and receive control commands to turn on/off a switch. This project, which can be built for less than 10 or 15 US$ does the following: Basic IoT Publish/Subscribe Messaging for ESP8266.

The ESP8266 is a microcontroller that will run you a whopping $7. 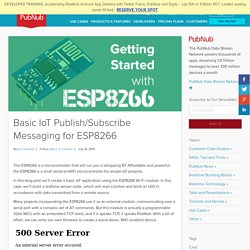 Affordable and powerful, the ESP8266 is a small serial-to-WiFi microcontroller for simple IoT projects. In this blog post we’ll create a basic IoT application using the ESP8266 Wi-Fi module. In this case, we’ll build a realtime sensor node, which will read a button and blink an LED in accordance with data transmitted from a remote source. Many projects incorporating the ESP8266 use it as an external module, communicating over a serial port with a complex set of AT commands. But this module is actually a programmable 32bit MCU with an embedded TCP stack, and if it speaks TCP, it speaks PubNub. Project Overview For this project, I am using the tiny ESP-01, but any of the modules with access to GPIO0 and GPIO2 will work.

Feel free to check out the full source code in the project GitHub repository. With that out of the way, we can get down to business. ESP8266 - Easiest way to program so far (Using Arduino IDE) Yep, another post on the ESP8266 is here (By the way, Have you heard about our Facebook page already? 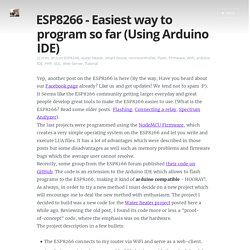 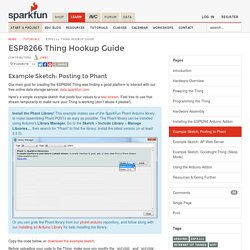 Here’s a simple example sketch that posts four values to a test stream. Feel free to use that stream temporarily to make sure your Thing is working (don’t abuse it please!). Install the Phant Library! ESP8266 Remote Controlled Sockets. ESP8266 - Easiest way to program so far (Using Arduino IDE) ESP8266 WiFi Shield Hookup Guide. Favorited Favorite 4 The ESP8266 works great and it’s cheap, but it can be so much more than a simple AT-command-driven serial-to-WiFi gateway! 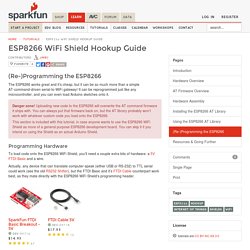 It can be reprogrammed just like any microcontroller, and you can even load Arduino sketches onto it. Danger zone! Uploading new code to the ESP8266 will overwrite the AT command firmware it ships with. You can always put that firmware back on, but the AT library probably won't work with whatever custom code you load onto the ESP8266. ESP8266 WiFi Shield Hookup Guide. DS18B20 Digital temperature sensor + extras ID: 374 - $3.95. These 1-wire digital temperature sensors are fairly precise (±0.5°C over much of the range) and can give up to 12 bits of precision from the onboard digital-to-analog converter. 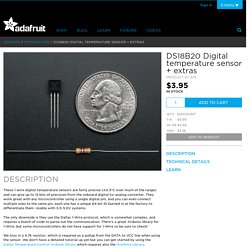 They work great with any microcontroller using a single digital pin, and you can even connect multiple ones to the same pin, each one has a unique 64-bit ID burned in at the factory to differentiate them. Usable with 3.0-5.0V systems.The only downside is they use the Dallas 1-Wire protocol, which is somewhat complex, and requires a bunch of code to parse out the communication. DHT22 temperature-humidity sensor + extras ID: 385 - $9.95. The DHT22 is a basic, low-cost digital temperature and humidity sensor. 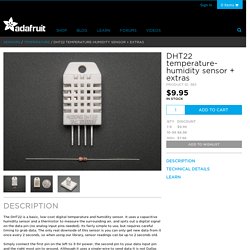 It uses a capacitive humidity sensor and a thermistor to measure the surrounding air, and spits out a digital signal on the data pin (no analog input pins needed). Its fairly simple to use, but requires careful timing to grab data. The only real downside of this sensor is you can only get new data from it once every 2 seconds, so when using our library, sensor readings can be up to 2 seconds old.Simply connect the first pin on the left to 3-5V power, the second pin to your data input pin and the right most pin to ground.

DHT22 accuracy test part 1. I have been boggled for a while about the Relative Humidity data that I gather, I get some higher than expected reading. I blogged about this in this post and @Dimitrios suggested in the comments that my box my be causing the issues. He sent me a 3D printed Stevenson screen to try, but I am still getting some 99.99% relative humidity readouts in the early mornings, while it has been relatively dry and hot out here the last week. @Phil also reports similar readings issues in the forum, so this calls for a test. Until now, I have blindly relied on DHT22’s datasheet that states: Every sensor of this model is temperature compensated and calibrated in accurate calibration chamber and the calibration-coefficient is saved in type of programme in OTP memory, when the sensor is detecting, it will cite coefficient from memory The sensor returns 40bit CRC-ed digital readout, so the library used to read it shouldn’t really matter.

Both devices offer the same resolution and accuracy. The two parts differ only in how the data is presented to the user. How the Devices Work. DS18B20 vs DS18S20 what is the difference? ESP8266 Wifi Temperature Logger. ESP8266 WiFi DS18B20 temperature sensor (ESP8266 Arduino IDE without Arduino) How it works: DS18B20 and Arduino - Simon Tushev Website. There are many Arduino sketches on the Web that provide sample code how to work with MAXIM’s (formerly DALLAS) DS18B20\DS18S20 digital temperature sensors. However, most of them do not describe the process in details. In this article, I’m going to show the gears that make the whole thing work.

An ESP8266 Serial WIFI Wireless Transceiver Module connects to a local WiFi network, creates a TCP connection to the site and periodically uploads current temperature and humidity data. Here are two windows onto the data being collected remotely by the WiFi Temperature & Humidity Data Logger. The ESP8266 is controlled by an Arduino Nano and powered by a separate and stable 3.3v power supply. In the first version of this design, the Nano sampled the analogue inputs from both a stable reference voltage and the TMP36 temperature sensor. Cloud Temperature Logger with the ESP8266 - Open Home Automation. The ESP8266 is an amazingly cheap & small WiFi chip that can be used for several home automation applications. In this project, we are going to use it to automatically log temperature (and humidity) measurements in the cloud, and display these measurements inside an online dashboard.

By following this tutorial, you will be able to build a small & cheap measurement platform that logs data in the cloud. Of course, this can be applied to several type of sensors, like motion detectors. ESP8266 WiFi relay switch. ESP8266 WiFI temperature and humidity sensor. ESP8266 - Page 4. Adafruit Feather HUZZAH with ESP8266 WiFi ID: 2821 - $15.95. Feather is the new development board from Adafruit, and like it's namesake it is thin, light, and lets you fly! ESP8266 Thing Development Board Hookup Guide. MOD-WIFI-ESP8266-DEV. Puuli 5 Sets ESP8266 Serials ESP-07 ESP-08 ESP-12 Wireless WIFI Module Transceiver Adapter Board for Arduino: Amazon.ca: Electronics. ESP8266 Interposer Board Module-0.53 and Free Shipping. Difference between nrf24l01 and esp8266. SmartArduino - Oscilloscope Specializing in Arduino compatible development boards and modules, oscilloscopes and other Electronics.