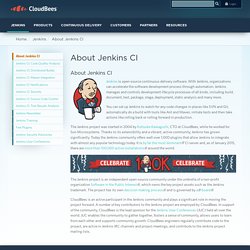 With Jenkins, organizations can accelerate the software development process through automation. Jenkins manages and controls development lifecycle processes of all kinds, including build, document, test, package, stage, deployment, static analysis and many more. You can set up Jenkins to watch for any code changes in places like SVN and Git, automatically do a build with tools like Ant and Maven, initiate tests and then take actions like rolling back or rolling forward in production. The Jenkins project was started in 2004 by Kohsuke Kawaguchi, CTO at CloudBees, while he worked for Sun Microsystems. 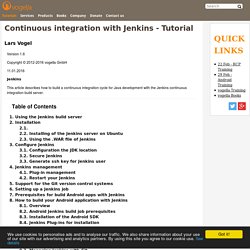 Docker on Synology. Synology and Docker are a great combination, so long as you have purchased the correct platform. 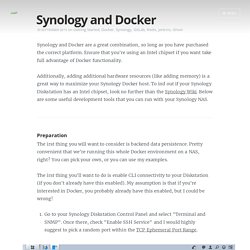 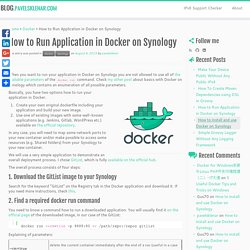 Check my other post about basics with Docker on Synology which contains an enumeration of all possible parameters. Basically, you have two options how to run your application in Docker. Create your own original dockerfile including your application and build your new image.Use one of existing images with some well-known applications (e.g. Jenkins, Gitlab, WordPress etc.) available on the official repository. How to install and use Docker on Synology. 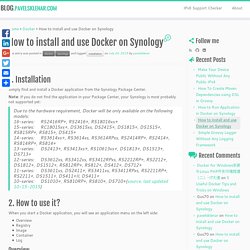 Installation Simply find and install a Docker application from the Synology Package Center. Docker for Dummies? Wildkiwi wrote:I too have successfully installed images and containers. 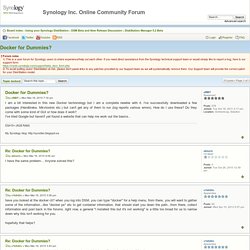 In this case it is crramirez/limesurvey one. It is started up but I am having issues working out the URL (internal and external) should look like to access it.Can anyone shed a little light on this part of the process please? Have a look at the Dockerfile. Find this line: Code: Select all. Package Bliss as a QPKG for easy installation on QNAP NAS devices, where all my music is :) – Customer Feedback for bliss.

I can confirm that Bliss works in the QNAP Container host, and the set-up process is pretty straight forward. 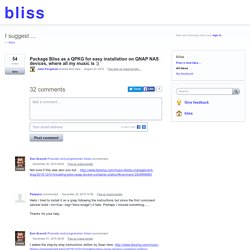 The steps I used are listed below - any improvements or suggestions welcome as this was my first shot at configuring a container... BTW: It would be handy if there was a standard URL for fetching the latest Bliss install jar file - e.g. Installing bliss in a QNAP Docker container - bliss. After three years of waiting for a bliss QNAP package, two turn up at once! 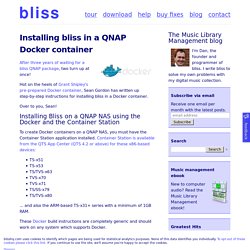 Hot on the heels of Grant Shipley's pre-prepared Docker container, Sean Gordon has written up step-by-step instructions for installing bliss in a Docker container. Over to you, Sean! To create Docker containers on a QNAP NAS, you must have the Container Station application installed. [4.2 Container Station 0 1.0] My cookbook (draft 3 updated) - Page 2 - QNAP NAS Community Forum. Hi, gt.guybrush wrote:i need it remotelyreal problem was lag: 1-2 sec to see reaction to my input, while using qts all works fine, so the hope in something working in qts.p.s.i can give a try to x11vnc but it's a lot of work since i have to setup a ssh server on nas for ssh tunneling, as i do last time on pc. but i think at this as workaround not as a real solution It's not really the subject of this thread ... please open a new one ... 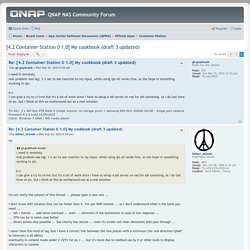 I don't know ANY solution that can be faster than X, Vnc por RDP remote ... so I don't understand what is the tools you need ...... ssh + tunnel ... add some overload ... even ... networks IS the bottleneck in case of low response ...... Docker run reference. Docker runs processes in isolated containers. 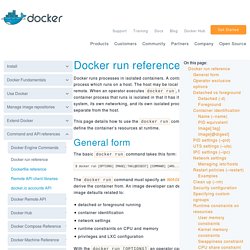 A container is a process which runs on a host. The host may be local or remote. When an operator executes docker run, the container process that runs is isolated in that it has its own file system, its own networking, and its own isolated process tree separate from the host. This page details how to use the docker run command to define the container’s resources at runtime. General form. What are the benefits of Container Station on your QNAP NAS. QNAP network attached storage (NAS) devices give you more than the ability to store your digital content on one box. Over the years, new features and apps have been released allowing users to find that their NAS has so much more to offer, from accessing and running hundreds of apps to turning your NAS device into a virtual PC.

With QNAP offering a range of NAS devices for all scenarios, it is the perfect choice for a home users and enterprises alike. Docker Toolbox Setup – Windows. With the release of Docker 1.8, Windows users who have been learning Docker using Boot2Docker VM Tool, need to learn a few new concepts to get their environment in place for their Docker learning journey. The guide below presents how to get the Docker Toolbox Setup on Windows and the general concepts behind Docker Machine, so that if you have been familiar with Boot2Docker before, your journey is a smooth.

If this is what your first time installing the Docker toolchain on your Windows box, then you have come to the right place too! You need to have Windows 7.1,8, 8.1 to run the Docker Toolbox. The installation page is here and it makes sense to go through it to validate certain things about your Operating System. The installer is available here and you should click on the Download (Windows) button to download the latest version of the installer.

Once you download the Installer binary on your machine, please launch it and pay special attention to the following: Let us try some commands now.

Docker - Beginner's tutorial. Docker is a relatively new and rapidly growing project that allows to create very light “virtual machines”. The quotation marks here are important, what Docker allows you to create are not really virtual machines, they’re more akin to chroots on steroids, a lot of steroids. In this tutorial we'll explore what Docker can do for you and how does it do what it does. Before we continue, let me clear something up. As of right now (4th of January of 2015) Docker works only on Linux, it cannot function natively on Windows or OSX.

I’ll be talking about the architecture of Docker later on and the reason will become obvious. The Hitchhiker's Guide to Docker and Modulus - Envato Tuts+ Code Tutorial. Docker Tutorial Series. Docker : Learning Resources.