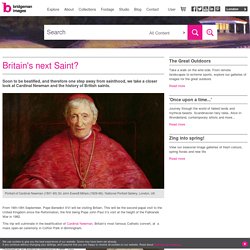 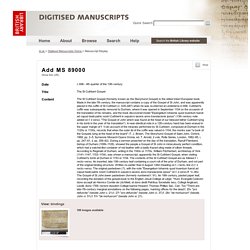 Unavailable in your country. My Albion: Saint Edmund the Ring-giver – SS Edmund and Edward in the later Middle Ages. I’m currently doing some reading in Legenda Aurea, the Dominican Jacobus de Voragine’s great compendium of saints’ legends and other liturgical feasts, designed to be a reference book for homilists. 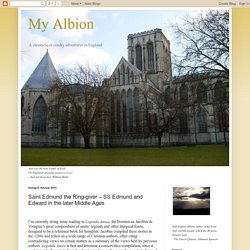 Jacobus compiled these stories in the 1260s and relied on a wide range of Christian authors, often citing contradicting views on certain matters as a summary of the views held by previous authors. Legenda Aurea is first and foremost a conservative compilation, since it contains only five saints from Jacobus’ own time or the preceding century. FIACC: Hymn on the Life of St. Patrick. 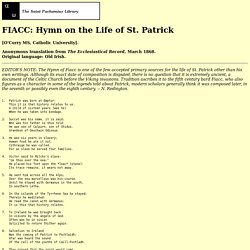 Anonymous translation from The Ecclesiastical Record, March 1868. Original language: Old Irish. EDITOR'S NOTE: The Hymn of Fiacc is one of the few accepted primary sources for the life of St. Patrick other than his own writings. Although its exact date of composition is disputed, there is no question that it is extremely ancient, a document of the Celtic Church before the Viking invasions. Celtic and Old English Saints - 2 May. Saint Germanus of Normandy. St Germanus the Bishop of Auxerre - Orthodox Church in America. Saint Germanus was born at Auxerre around 389, and studied rhetoric and law at Rome. 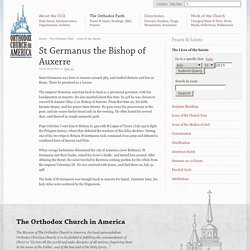 There he practiced as a lawyer. The emperor Honorius sent him back to Gaul as a provincial governor, with his headquarters at Auxerre. He also married about this time. In 418 he was chosen to succeed St Amator (May 1) as Bishop of Auxerre. From that time on, his faith became deeper, and his prayer more fervent. Pope Celestine I sent him to Britain in 429 with St Lupus of Troyes (July 29) to fight the Pelagian heresy, where they defeated the teachers of this false doctrine. When savage barbarians threatened the city of Armorica (now Brittany), St Germanus met their leader, seized his horse’s bridle, and turned him around. Internet History Sourcebooks. Artwork highlights - 'The Life of St Ursula and the 11,000 Virgins', c.1400-1410, by Valencian School.

Unavailable in your country. Unavailable in your country. The early South-English legendary ; or, Lives of saints. I. Ms. Laud, 108, in the Bodleian library. Edited by Carl Horstmann. On union with God. Cleaving.pdf. Lives of the deceased bishops of the Catholic C... Erik Gnupsson, Bishop of Greenland and Vinland. St. Albert the Great - The Church and Science Are Not at War. St. 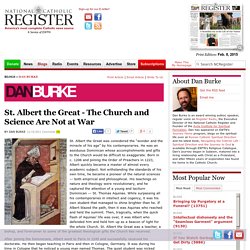 Albert the Great was considered the “wonder and the miracle of his age” by his contemporaries. He was an assiduous Dominican whose accomplishments and gifts to the Church would be difficult to exaggerate. Born in c. 1206 and joining the Order of Preachers in 1223, Albert quickly became a master of almost every academic subject. Not withstanding the standards of his own time, he became a pioneer of the natural sciences –- both empirical and philosophical. His teachings on nature and theology were revolutionary, and he captured the attention of a young and taciturn Dominican –- St. After joining the Dominicans, Albert went to Paris in 1245 and successfully received his doctorate. God & Nature What drew Aquinas –- and the praise and condemnation of others –- to St. If it snows, is God making it snow or are there self-moving natural causes for the snow? 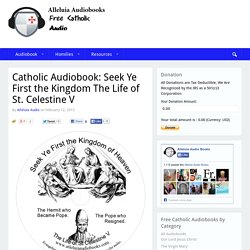 Most people do not know though that he was a miracle worker and a major spiritual leader before being elected Pope. Why St Celestine V Pope Benedict XVI on February 10, 2013 made the announcement that he would retire from the Papacy due to declining health. Many people will make themselves miserable trying to see the angles, politics and cunning behind such an unusual move made by the Vicar of Christ. Seek ye therefore first the kingdom of God, and his justice, and all these things shall be added unto you. If Pope Benedict XVI has found in St Celestine V an example worthy of imitation, a heavenly friend and intercessor then we should look to him now as well. Albert the Great. Medieval theologian, philosopher, and scientist Source: Wikipedia Albertus entered the newly founded Dominican order in Padua (Italy) in 1223. 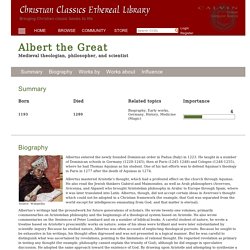 Unavailable in your country. The American Normal Readers: Fifth Book - May Louise Harvey. Theban Legion. The Theban Legion (also known as the Martyrs of Agaunum) figures in Christian hagiography[1] as an entire Roman legion — of "six thousand six hundred and sixty-six men"[2] — who had converted en masse to Christianity and were martyred together, in 286, according to the hagiographies of Saint Maurice, the chief among the Legion's saints. 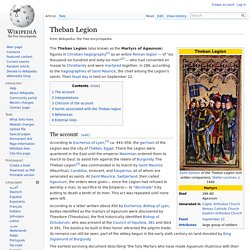 Their feast day is held on September 22. The account[edit] Magnus of Füssen. Saint Magnus of Füssen, otherwise Magnoald or Mang, was a missionary saint in southern Germany, also known as the Apostle of the Allgäu. 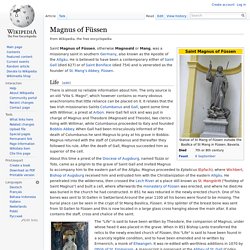 He is believed to have been a contemporary either of Saint Gall (died 627) or of Saint Boniface (died 754) and is venerated as the founder of St. Mang's Abbey, Füssen. Life[edit] There is almost no reliable information about him. The only source is an old "Vita S. Otloh of St. Emmeram. Otloh of St Emmeram (also Othlo) (c. 1010 – c. 1072) was a Benedictine monk of St Emmeram's in Regensburg, known as a scholar and educator.

Saints and their Communities : Miracle Stories in Twelfth-Century England ... - Simon Yarrow. Byrhtferth of Ramsey : The Lives of St Oswald and St Ecgwine: The Lives of ... English Monarchs - Kings and Queens of England - Egbert. Series of miniatures: cycle for the Great Feasts of scenes from the Lives of Christ and the Virgin; pictorial calendar of saints, September to August; cycle for St. Demetrios. - Medieval and Renaissance Manuscripts. An Age of Saints?: Power, Conflict and Dissent in Early Medieval Christianity. Saint Bernward of Hildesheim: Medieval Patron of the Arts. Baptismal Font (detail), copper alloy (c. 1226), Hildesheim Cathedral, Hildesheim, Germany. Samuel Aba, King of Hungary. Around 1009, Samuel or his father married a sister of Stephen I, the first King of Hungary. Thereafter the originally pagan or Jewish Aba family converted to Christianity.

King Stephen appointed Samuel to head the royal court as his palatine. Géza I of Hungary. Géza closely cooperated with Solomon, but their relationship became tense from 1071.