Chassidic Dimension - Volume 3: Nitzavim - Wisdom & Teachings. The Nasi in English - Chabad.org. First of Nissan And it was on the day that Moses finished setting up the Tabernacle, and had anointed it and sanctified it and all its vessels, and the altar and all its vessels, and had anointed them and sanctified them—that the princes of Israel, the heads of their father’s houses, who were the princes of the tribes, those who had superintended the counting, offered: And they brought their offering before the Lord—six covered wagons and twelve oxen, a wagon for every two of the princes and an ox for each one; and they presented them before the Tabernacle. 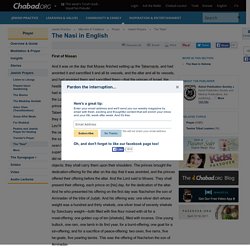 And the Lord spoke to Moses, saying: Accept it from them that they may be used in the service of the Tent of Meeting, and give them to the Levi’im, to each man according to his service. Eikev: Bread from Heaven - Kabbalah, Chassidism and Jewish Mysticism. One of the main subjects of Parshas Eikev is the man — the manna that the Jewish people ate during their travels through the desert. 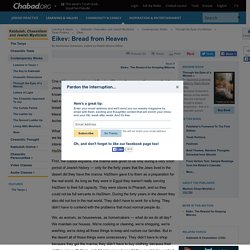 Now as everyone knows, the manna was very, very different from any other food that Israelites had ever had before. The manna was known as lechem min hashamayim — bread from heaven. As a matter of fact, when they ate the manna, the blessing they made was …hamotzi lechem min hashamayim, not …hamotzi lechem min ha’aretz! Something from Nothing - Torah & Science. Ever since our father Abraham first recognized the Creator and established a personal relationship with Him, his descendants have been in conflict with the rest of the world. 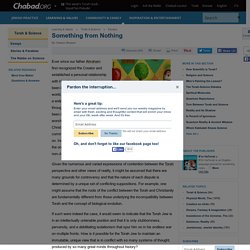 This discord has assumed a wide variety of formats throughout history. The Jews have been in conflict with idol worshippers, Hellenists, Christians, Moslems, communists, secularists, and so on. Indeed, it would appear that the only limit to the number of clashes is the number of identifiable non-Jewish, or more accurately, non-Torah, world views. Given the numerous and varied expressions of contention between the Torah perspective and other views of reality, it might be assumed that there are many grounds for controversy and that the nature of each dispute is determined by a unique set of conflicting suppositions. 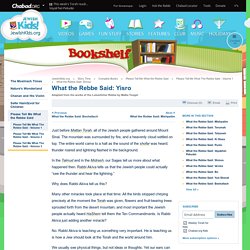 The mountain was surrounded by fire, and a heavenly cloud settled on top. The entire world came to a halt as the sound of the shofar was heard; thunder roared and lightning flashed in the background. In the Talmud and in the Midrash, our Sages tell us more about what happened then. Rabbi Akiva tells us that the Jewish people could actually “see the thunder and hear the lightning.”

Why does Rabbi Akiva tell us this? The Holy Bible Containing the Old and New Testaments: The Text Printed from ... - Adam Clarke - Google Books. Jews and Syria: 10 Fascinating Facts. Syria dominates many news headlines today. 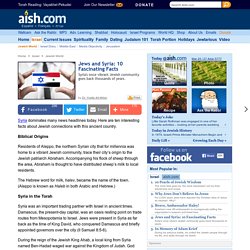 Here are ten interesting facts about Jewish connections with this ancient country. Biblical Origins Residents of Aleppo, the northern Syrian city that for millennia was home to a vibrant Jewish community, trace their city’s origin to the Jewish patriarch Abraham. Accompanying his flock of sheep through the area, Abraham is thought to have distributed sheep’s milk to local residents. Righteousness is Not Leadership - Covenant & Conversation - Parsha. The praise that Noah is accorded is unparalleled anywhere in Tanach. 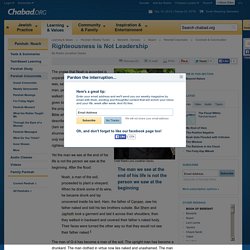 He was, says the Torah, “a righteous man, perfect in his generations; Noah walked with G‑d.” No such praise is given to Abraham or MosesThe man we see at the end of his life is not the person we saw at the beginning or any of the prophets. The only person in the Bible who comes close is Job, described as “blameless and upright (tam ve-yashar); he feared G‑d and shunned evil.” Uniting Body with Soul - The Life and Writings of Rabbi Levi Yitzchak Schneerson—Part One - Life & Times. The commandments of the Torah are called the Torah’s body. 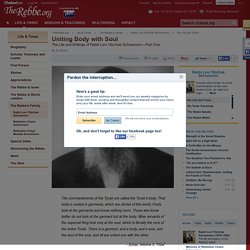 That body is vested in garments, which are stories of this world. ^ Spring and Slaughter ^ Ronnie - kishinev. The David Berg Rare Book Room at the Center for Jewish History. Exploring the Jewish Community in Metz, France in the 18th & 19th Centuries. French and Jewish: Defining a Modern Jewish Identity in the 19th Century Interview with Jay Berkovitz. YIVO Institute for Jewish Research. YIVO Institute for Jewish Research.

YIVO Institute for Jewish Research. First published in a Yiddish edition in 1958, Profiles of a Lost World is a source of information about Eastern Europe before World War II as well as an touchstone for understanding a rich and complex cultural environment. 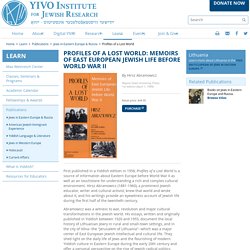 Hirsz Abramowicz (1881-1960), a prominent Jewish educator, writer and cultural activist, knew that world and wrote about it, and his writings provide an eyewitness account of Jewish life during the first half of the twentieth century. Abramowicz was a witness to war, revolution and major cultural transformations in the Jewish world. The YIVO Encyclopedia of Jews in Eastern Europe. YIVO Institute for Jewish Research. The Melting Pot (play) Theatre Programme for The Melting Pot (1916) The Melting Pot is a play by Israel Zangwill, first staged in 1908. 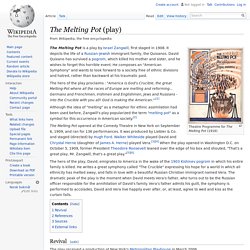 It depicts the life of a Russian-Jewish immigrant family, the Quixanos. David Quixano has survived a pogrom, which killed his mother and sister, and he wishes to forget this horrible event. He composes an "American Symphony" and wants to look forward to a society free of ethnic divisions and hatred, rather than backward at his traumatic past. Kishinev pogrom. This article is part of the History of the Jews in Bessarabia. 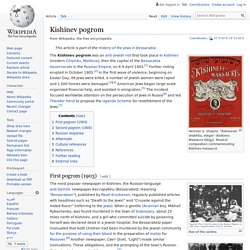 Herman S. Shapiro. "Kishinever shekhita, elegie" [Kishinev Massacre Elegy]. New York: Asna Goldberg, 1904. Irene Heskes Collection. Untitled. Khmelnytsky Uprising. The Khmelnytsky Uprising (Ukrainian: Повстання Хмельницького; also known as the Khmel'nyts'kyi/Chmielnicki Uprising or Ukrainian War of Liberation)[1] was a Cossack rebellion in Ukraine between the years 1648–1657 which turned into a Ukrainian war of liberation from Poland. Under the command of Hetman Bohdan Khmelnytsky, the Zaporozhian Cossacks allied with the Crimean Tatars, and the local peasantry, fought several battles against the armies and paramilitary forces of the Polish–Lithuanian Commonwealth. Asser Levy. Asser Levy (died 1680), also known as Asher Levy, was one of the first Jewish settlers of the Dutch colony of New Amsterdam on Manhattan Island.

Life and career[edit] Asser Levy was probably born in Vilna, Poland. He left Poland for Amsterdam, possibly to escape the pogroms of the Khmelnytsky uprising. Although he lived for a time in Amsterdam, he was not given burgher (citizenship) rights, and probably was not granted poorter (permanent residency) rights either. He might also have lived for a time in Schwelm, a town in the County of Mark in modern-day Germany. BILL FOR REMOVAL OF JEWISH DISABILITIES. (Hansard, 17 May 1830) Jews Relief Act 1858. The Jews Relief Act 1858, also called the Jewish Disabilities Bill, is an Act of the Parliament of the United Kingdom which removed previous barrier to Jews entering Parliament.[1] In 1848, the bill was approved by the House of Commons but was twice rejected by the House of Lords as was a new bill in 1851.

In the 1852 general election, Rothschild was again elected but the next year the bill was again defeated in the upper house. Finally, in 1858, the House of Lords agreed to a proposal to allow each house to decide its own oath. Amendments in 1871, 1922, 1973, 1980 and 1986 removed all restrictions on Jews holding office except that they may not advise certain government officials on matters related to appointments in the Church of England or the Church of Scotland.[3] See also[edit] Jews Relief Act 1858. Rav Chaim Kanievsky On How Much Should You Give To Shemita.

Jewish terrorists backed by 'new Sanhedrin' Following the administrative detentions of right wing activists, the new Sanhedrin issued a statement of support of the radical right wing for 'risking their lives for the holiness of the nation and the Land.' The new Sanhedrin movement – an organization that seeks to restore rabbinical law in Israel – provided support to the e11 right-wing extremists recently slapped with restraining orders, Ynet learned Monday. Follow Ynetnews on Facebook and Twitter. Jewish Russia, 1800-1850. The early 1800s marked the beginning of a significant change for Jewish life in Eastern Europe.

The change took place in many different spheres and on many levels. Population Explosion. Rav Moshe Twersky zt”l Hy”d on the Parsha. By Rabbi Yehoshua Berman (“לא תשחית” (כ:יט “I was once speaking to Rebbi about potential problems of bal tashchis in regards to leftover food. Rebbi told me, ‘Better to throw it out than to throw it in!” (Reb Nesanel Seif) An Overview of the Day of Tisha B’Av. On Tisha B’Av, five national calamities occurred: Some Israelis hope to be recognized as Jews through alternative courts. Show caption. Environmental Responsibility - Judaism - Arutz Sheva. Ohr Torah on the Parsha: War on Women and Children? - Judaism - Arutz Sheva. “When you march up to attack a city, make its people an offer of peace.” (Deuteronomy 20:10) Hagon HaRav Moshe Sternbuch Opposes Agudath Israel’s Lobbying Efforts Against Iran Nuke Deal. Saul Solomon. Jewish Culture & Religion. “Why Won’t Anyone Say They Are Jewish?” , Kalle Lasn’s infamous Adbusters article (March/April 2004), is often talked about.

But it is curiously hard to find a copy of the actual image—especially since much of its notoriety derives from it being a list political figures in which the Jewish ones are marked with symbols next to their names! So, with all the brew-ha-ha lately about antisemitism at Occupy Wall Street, we thought we’d pull this one out of the archives. Former MK's son indicted for praising gay parade stabbing. The Left Rejoices - Op-Eds - Arutz Sheva. A terrible crime took place.

Jewish Athletes Under Siege in Germany - Op-Eds - Arutz Sheva. 'Where is the Outcry about Terror Against Jews?' - Inside Israel. Pollard-Lobby Head Slammed for Anti-Pollard Remark - Inside Israel. Frum Man Beaten In Williamsburg In Latest Possible Hate Crime. Anti-Semitism: 2,000 years of scapegoating the Jews - Opinion. On My Mind: European body bags - Opinion.