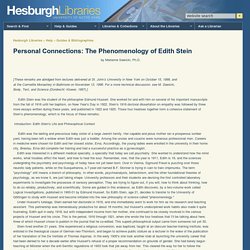 [These remarks are abridged from lectures delivered at St. John’s University in New York on October 15, 1998, and at the Carmelite Monastery in Baltimore on November 13, 1998. For a more technical discussion, see M. Sawicki, Body, Text, and Science (Dordrecht: Kluwer, 1997).] Edith Stein was the student of the philosopher Edmund Husserl. Introduction: Edith Stein's Life and Philosophical Context Edith was the darling and precocious baby sister of a large Jewish family. 1.

The first of the four great early treatises is Stein's doctoral dissertation on "empathy," completed in 1916 and published the following year. Time 1: Imagined possible state of affairs. Time 2: State chosen as "motive. " Time 3: Motive motivates action. Time 4: Action realizes state of affairs. This brings me to the last major feature of Stein's first treatise that I want to cover: her celebrated theory of "person.

" 2. Healing an Ancient Wound. Excerpted from the Koren Shavuot Mahzor with introduction by Rabbi Lord Jonathan Sacks The word tikkun, as in tikkun olam, “mending the world,” and tikkun leyl Shavuot, the custom of staying up and studying Torah all night on the first night of the festival, has a curious history. 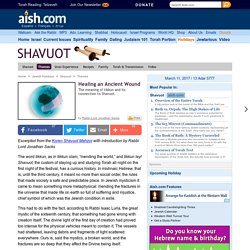 In mishnaic Hebrew, that is, until the third century, it meant no more than social order, the rules that made society a safe and predictable place. In Jewish mysticism it came to mean something more metaphysical: mending the fractures in the universe that made life on earth so full of suffering and injustice, chief symbol of which was the Jewish condition in exile. This had to do with the fact, according to Rabbi Isaac Luria, the great mystic of the sixteenth century, that something had gone wrong with creation itself.

The divine light of the first day of creation had proved too intense for the physical vehicles meant to contain it. Exile is not just a human phenomenon. The German Ideology. Karl Marx. 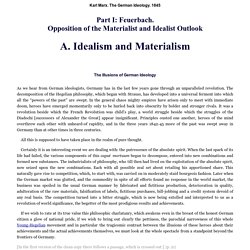 The German Ideology. 1845 Part I: Feuerbach. Opposition of the Materialist and Idealist Outlook The Illusions of German Ideology As we hear from German ideologists, Germany has in the last few years gone through an unparalleled revolution. All this is supposed to have taken place in the realm of pure thought. Certainly it is an interesting event we are dealing with: the putrescence of the absolute spirit. If we wish to rate at its true value this philosophic charlatanry, which awakens even in the breast of the honest German citizen a glow of national pride, if we wish to bring out clearly the pettiness, the parochial narrowness of this whole Young-Hegelian movement and in particular the tragicomic contrast between the illusions of these heroes about their achievements and the actual achievements themselves, we must look at the whole spectacle from a standpoint beyond the frontiers of Germany. 1.

A. Ideology in General, German Ideology in Particular [3. . [4. . [5. Footnotes. Summary of Hegel's Philosophy of Mind. Up to the English Server! 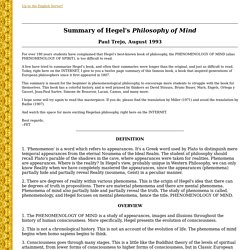 Paul Trejo, August 1993 For over 180 years students have complained that Hegel's best-known book of philosophy, the PHENOMENOLOGY OF MIND (alias PHENOMENOLOGY OF SPIRIT), is too difficult to read. A few have tried to summarize Hegel's book, and often their summaries were longer than the original, and just as difficult to read. Today, right here on the INTERNET, I give to you a twelve page summary of this famous book, a book that inspired generations of European philosophers since it first appeared in 1807. This summary is meant for the beginner in phenomenological philosophy, to encourage more students to struggle with the book for themselves. This book has a colorful history, and is well praised by thinkers as David Strauss, Bruno Bauer, Marx, Engels, Ortega y Gasset, Jean-Paul Sartre, Simone de Beauvoir, Lacan, Camus, and many more. 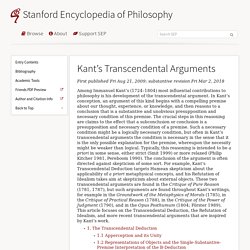 The Transcendental Deduction The Transcendental Deduction (A84–130, B116–169) is Kant’s attempt to demonstrate against empiricist psychological theory that certain a priori concepts correctly apply to objects featured in our experience. Dieter Henrich (1989) points out that Kant’s use of ‘Deduktion’ redeploys German legal vocabulary; in Holy Roman Empire Law, ‘Deduktion’ signifies an argument intended to yield a historical justification for the legitimacy of a property claim. In Kant’s derivative epistemological sense, a deduction is an argument that aims to justify the use of a concept, one that demonstrates that the concept correctly applies to objects. For Kant a concept is a priori just in case its source is the understanding of the subject and not sensory experience (A80/B106; Strawson 1966: 86). Hume’s position on the deducibility of a priori metaphysical concepts is Kant’s quarry in the Transcendental Deduction. 1.1 Apperception and its Unity.

Related:  everything else   -  Education   -  Enterprise