I AM a Poem by Myron Dewey.

Prolific The Rapper Posts: The divestments continue, camps are being planned/established around the nation, the fire is spreading. #StillStanding – standingrock2017

Chairwoman Haaland, the first Native American state party chair in the country, said, “The Democratic Party of New Mexico knows that it's imperative tribes have a seat at the table and that their voices are respected. 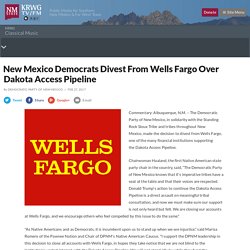 Donald Trump's action to continue the Dakota Access Pipeline is a direct assault on meaningful tribal consultation, and now we must make sure our support is not only heard but felt. We are closing our accounts at Wells Fargo, and we encourage others who feel compelled by this issue to do the same. " "As Native Americans and as Democrats, it is incumbent upon us to stand up when we see injustice," said Marisa Romero of the Pawnee Nation and Chair of DPNM's Native American Caucus.