Explicit cookie consent. WHAT does a single-issue political party do when it achieves its sole goal? 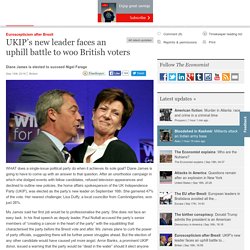 Diane James is going to have to come up with an answer to that question. After an unorthodox campaign in which she dodged events with fellow candidates, refused television appearances and declined to outline new policies, the home affairs spokesperson of the UK Independence Party (UKIP), was elected as the party’s new leader on September 16th. She garnered 47% of the vote. Her nearest challenger, Lisa Duffy, a local councillor from Cambridgeshire, won just 26%. Ms James said her first job would be to professionalise the party. As for policy, Ms James seems to be short of a plan. Many members therefore reckon the party’s future lies in Wales and northern England, where they hope to win votes from disaffected former Labour votes (the “harvest” of such votes has just begun, boomed Mr Farage in his farewell address). Parliament should 'play a central role' in triggering Article 50 - News from Parliament - UK Parliament. Parliament's role The Committee says that the referendum result was clear, and that Parliament is responsible for ensuring the Government implements that result and takes forward Brexit negotiations in a way that achieves the best possible outcome for the UK as a whole. 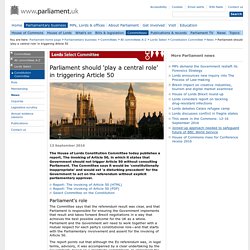 Parliament and the Government will need to work together with a mutual respect for each party's constitutional role—and that starts with the Parliamentary involvement and assent for the invoking of Article 50. The report points out that although the EU referendum was, in legal terms, advisory, it was accompanied by a clear undertaking by the Government, based on a manifesto commitment, to implement the decision reached in the referendum. In the UK's representative democracy, it should be Parliament which takes the decision to act following the referendum.

The Committee therefore states that Parliament should: Triggering Article 50 The report therefore states that Parliament should: LV= car insurance premiums to rise as profits plummet. LV= has warned that car insurance premiums are to increase as it blamed the rising cost of accident payouts and low interest rates for a dramatic drop in profits in the first six months of 2016. 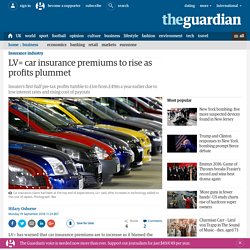 The insurer, Britain’s biggest mutual, said pre-tax profits to 30 June had fallen to £1m, compared with £49m a year earlier. Since the period covered by the results, interest rates have been cut as the Bank of England tries to stabilise the economy after the British vote to leave the European Union on 23 June. Richard Rowney, LV= chief executive, said: “We are operating in a prolonged low interest rate environment with significant volatility and this has created challenging market conditions.” Profits for the company’s general insurance business, which covers home and vehicle policies, fell from £70m a year ago to £22m.

The insurer reported good growth in motor and commercial policy sales, but home insurance premiums were flat. UK consumers maintain enthusiasm for summer shopping. UK retail sales dipped only slightly in August following a bumper July in the latest sign that the Brexit vote has done little to dent consumers’ willingness to spend. 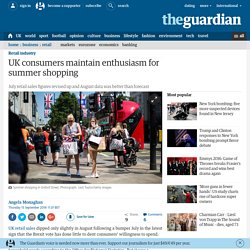 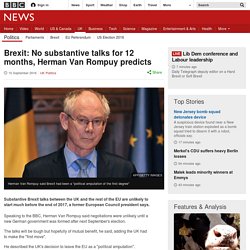 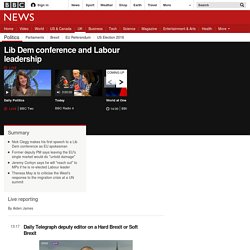 Theresa May urges new approach to migrant crisis at UN summit. Image copyright AFP/Getty Theresa May will criticise the West's response to the migration crisis when she addresses world leaders later. 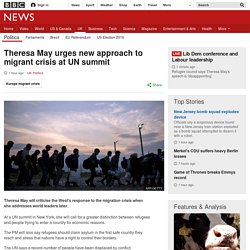 At a UN summit in New York, she will call for a greater distinction between refugees and people trying to enter a country for economic reasons. Apple hits back at 'corrosive' claim by US government. Image copyright Getty Images Apple has accused the US government of trying to "smear" it with "desperate" and "unsubstantiated" claims. 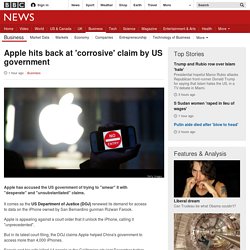 It comes as the US Department of Justice (DOJ) renewed its demand for access to data on the iPhone owned by San Bernardino gunman Rizwan Farook. Apple is appealing against a court order that it unlock the iPhone, calling it "unprecedented". But in its latest court filing, the DOJ claims Apple helped China's government to access more than 4,000 iPhones.

Evidence on persistent poverty in the UK. How much Inequality is Too Much? Oxfam report on increasing wealth inequality - some flaws in the data? UK jobless rate at 10-year low but wage growth slows. Image copyright Getty Images The UK unemployment rate has fallen to its lowest rate in more than a decade but wage growth has slowed. 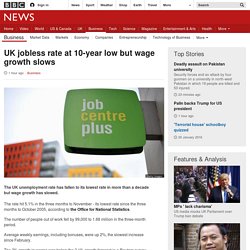 The rate hit 5.1% in the three months to November - its lowest rate since the three months to October 2005, according to the Office for National Statistics. The number of people out of work fell by 99,000 to 1.68 million in the three-month period. Average weekly earnings, including bonuses, were up 2%, the slowest increase since February. Conservatives to cut school funding by 10% if they win general election. English schools face a budget cut of an estimated 10% in real terms during the next parliament if the Conservatives win the election after David Cameron conceded that his party could not promise to inflation-proof education funding. 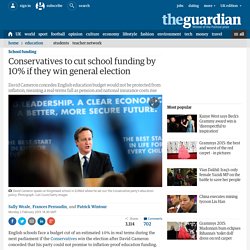 Schools would have to pay 5% more to fund rising teachers’ pension and national insurance contributions, while economists said the prime minister’s admission would mean a further cut in real terms. Cameron initially sought to dress up the funding pledge as a “flat cash per pupil” deal, because the amount of money following each child would remain unchanged. Speaking at Kingsmead school in Enfield, north London on Monday, he added: “So I can tell you, with a Conservative government, the amount of money following your child into school will not be cut.” But when questioned, Cameron conceded that the funding would not rise in real terms, prompting educationalists and political opponents to complain about the impact. Business Live: HSBC tax scandal - BBC News. HSBC tax claim sparks Labour v Conservative row. 9 February 2015Last updated at 09:45 ET Mr Miliband has called for answers over the government's appointment of Stephen Green as a trade adviser The claims HSBC helped wealthy clients dodge UK taxes has sparked a political row, with Labour and the Conservatives set to clash in the Commons later.

Labour leader Ed Miliband said the government had "some serious questions to answer" and accused HM Revenue & Customs of failing to act on details it was given in 2010 about the claims. Rochester: Farage looks to more UKIP gains after success. 'Top Christmas toys' in pictures. 5 November 2014Last updated at 08:12 ET Dolls, Lego and variations of new technology all feature in a list of predicted bestselling toys this Christmas.

The annual Dream Toys chart, from the Toy Retailers Association, features toys ranging in price from £7.99 mini-figures to a £99.99 dinosaur. UK doctors have 'ethical duty' to prevent waste. Doctors have an ethical duty to prevent waste in the NHS, argues a report by the Academy of Medical Royal Colleges. Its authors point to potential cost savings of nearly £2bn. Examples include better use of medication, tests, hospital beds and operating theatres. The British Medical Association said doctors were ideally placed to identify savings, but patients must come first. Adam Brimelow reports. Ed Miliband promises £2.5bn funding boost 'to save NHS' 23 September 2014Last updated at 12:27 ET Ed Miliband: "It's time to care about our NHS" Ed Miliband has said a future Labour government would pay for 36,000 more doctors, nurses and midwives, partly funded by a tax on tobacco firms.

The Labour leader told his conference the £2.5bn funding pledge to "save and transform" the NHS by 2020 would be the centrepiece of his plan for government. BBC iPlayer - Free Speech - Series 3: Episode 9. Radio 4 Money Box - David Cameron on Pension Freedoms. Google Scholar. BBC Democracy Live - BBC Parliament.

Austerity myths revisited Posted by David Smith at 01:00 PM Category: Thoughts and responses My piece on Friday, The Myth of Abandoned Austerity, has attracted quite a lot of interest. It had a simple aim - to demonstrate that fiscal consolidation, deficit reduction, continued throughout the parliament, alongside recovery. Virtual Economy. LifeSkills created with Barclays.