Canadian poet George Elliott Clarke cancels Regina lecture after controversy over convicted killer's poetry. A renowned Canadian poet, who had worked with the man convicted of killing an Indigenous woman 25 years ago, has cancelled his controversial presentation at an upcoming University of Regina event. 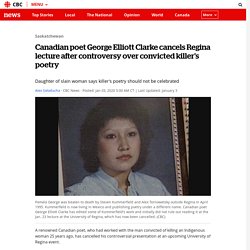 George Elliott Clarke said earlier this week that he wasn't ruling out reading the work of Steven Kummerfield, who was convicted of manslaughter in the beating death of Pamela George in 1995. Clarke had previously edited poetry by Kummerfield, who changed his name to Stephen Brown. On Thursday, amid calls to cancel the event, Clarke apologized to members of George's family, who opposed the lecture. 'Outlander's Depiction Of Slavery In America Fails POC Viewers, But Here's How The Show Can Do Better. Spoilers ahead for Outlander Season 4, Episode 2. 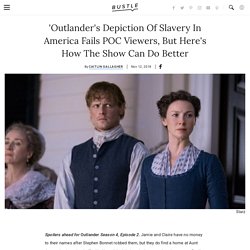 Jamie and Claire have no money to their names after Stephen Bonnet robbed them, but they do find a home at Aunt Jocasta's plantation in "Do No Harm. " And their arrival means that viewers are finally able to see how Outlander addresses slavery in America. Study says 60% of First Nation children on reserve live in poverty. OTTAWA — Indigenous children in Canada are more than twice as likely to live in poverty than non-aboriginal kids, according to new findings released Tuesday by the Canadian Centre for Policy Alternatives. 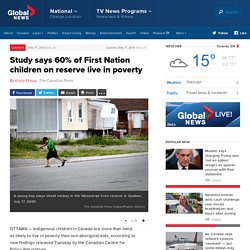 The study, which delves into poverty rates on reserves and in the territories as measured by income, documents the dire conditions being experienced by status First Nations children, including 60 per cent of those who live on reserves. Poverty rates are highest for First Nations kids on reserves in Manitoba at 76 per cent and Saskatchewan at 69 per cent, the study found. Coming Together - Alberta Views - The Magazine for Engaged Citizens. For well over a decade I’ve talked to Canadians about the issues Indigenous peoples face. 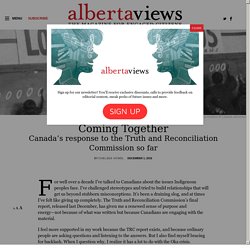 I’ve challenged stereotypes and tried to build relationships that will get us beyond stubborn misconceptions. It’s been a draining slog, and at times I’ve felt like giving up completely. The Truth and Reconciliation Commission’s final report, released last December, has given me a renewed sense of purpose and energy—not because of what was written but because Canadians are engaging with the material. I feel more supported in my work because the TRC report exists, and because ordinary people are asking questions and listening to the answers. But I also find myself bracing for backlash. When Oka happened, in the summer of 1990, I was in junior high. The Problem Isn't the Color of the Oppressor's Skin - the Problem Is a Meme. Have a look at this 2 minute clip from the film Schooling the World: The White Man's Last Burden: The clip went viral on Facebook, generating 120,000 shares and over 2000 comments. 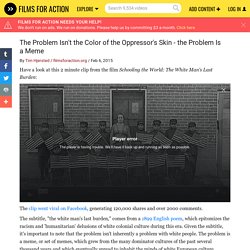 The subtitle, "the white man's last burden," comes from a 1899 English poem, which epitomizes the racism and 'humanitarian' delusions of white colonial culture during this era. The myth of the Wheat King and the killing of Colten Boushie. When eight Plains Cree men were hanged in Battleford, Sask., in 1885, children from the nearby Battleford Industrial School were brought to the gallows to serve as witnesses, to warn against future resistance towards the dominion government. 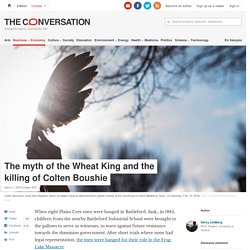 After short trials where none had legal representation, the men were hanged for their role in the Frog Lake Massacre. In thick white paint on black crosses, the graves of the deceased at Frog Lake were marked with the bald description: “Massacred on April 2, 1885.” Some of those children also lost their lives during their captivity at Battleford Industrial residential school. They were not offered the small grace of a grave marker, let alone any remembrance of their victimhood. Indigenous Women and Children Left Behind - Again. (Pam Palmater, photo by Ben Powless) As expected, the Assembly of First Nations was first out of the gate offering glowing praise for this Liberal government’s federal budget, followed shortly thereafter by the Metis National Council and Inuit Tapiriit Kanatami – the three male-dominated national Aboriginal organizations. 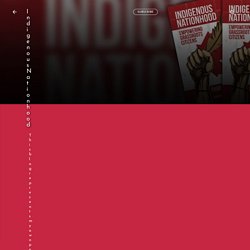 Their organizations have seen substantial increases in funding for their political organizations in recent years. 21 things you may not know about the Indian Act. The Indian Act has been a lightning rod for criticism and controversy over the years, widely attacked by First Nations people and communities for its regressive and paternalistic excesses. 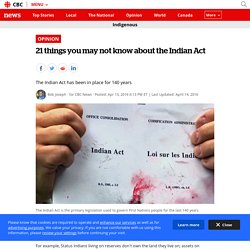 For example, Status Indians living on reserves don't own the land they live on; assets on reserve are not subject to seizure under legal process making it extremely difficult to borrow money to purchase assets; and matrimonial property laws don't apply to assets on reserve. The act has also been criticized by non-Aboriginal Peoples and politicians as being too paternalistic and creating an unjust system with excessive costs that are considered uneconomical. In South Africa, 'Decolonizing' Mathematics. Twice a week, Tiri Chinyoka holds extracurricular classes for mathematics undergraduates at the University of Cape Town in South Africa. 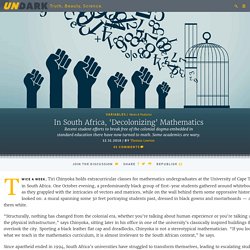 One October evening, a predominantly black group of first-year students gathered around whiteboards as they grappled with the intricacies of vectors and matrices, while on the wall behind them some oppressive history looked on: a mural spanning some 30 feet portraying students past, dressed in black gowns and mortarboards — all of them white. Some academics are worried that the decolonization movement could disadvantage South African mathematicians in the global arena. “Structurally, nothing has changed from the colonial era, whether you’re talking about human experience or you’re talking about the physical infrastructure,” says Chinyoka, sitting later in his office in one of the university’s classically inspired buildings that overlook the city. Sporting a black leather flat cap and dreadlocks, Chinyoka is not a stereotypical mathematician. 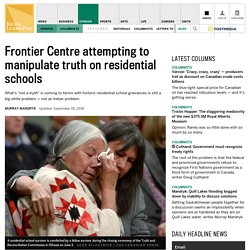 He was once a much-lauded administrator for the Gordon’s Indian Residential School praised for his sports and Native dance program. It is not a myth that he coerced children placed under his care into sexual acts, bribing them with canteen and other privileges and punishing those who resisted. It is not a myth that on Feb. 2, 1993, he pleaded guilty to 10 counts of sexual assault that involved 10 boys who were then between the ages of seven and 14.

It is not a myth that Canadian residential schools were a horrible, racist-driven, misguided concept borrowed from the U.S. by Nicholas Flood Davin (the founder of this very newspaper) and sold to our first prime minister John A. A university president apologizes for academia’s role in residential schools. Reconciliation amid racism: Is it possible on the Prairies? - Saskatchewan. Max FineDay felt an unspeakable rage and an overwhelming sorrow when Gerald Stanley walked free from the courthouse in Battleford, Sask., earlier this year. Stanley fatally shot 22-year-old Colten Boushie in August 2016 on his farm in the Biggar, Sask., area. In February, the white Saskatchewan farmer was acquitted of second-degree murder in the death of the Cree man. FineDay travelled home to the Sweetgrass First Nation in Saskatchewan to speak to his elders after the verdict was announced.

He works in Ottawa as the executive director of the Canadian Roots Exchange, an organization that works with Indigenous and non-Indigenous youth toward reconciliation. "Grandchild, you must persevere in the way that all of our ancestors have done before, because you stand on their shoulders," they said to him on Treaty Six territory. How the death of Colten Boushie became recast as the story of a knight protecting his castle​ During his opening statements in the trial of Gerald Stanley, the Saskatchewan farmer who on Friday was found not guilty in the murder of young Cree man Colten Boushie, defence lawyer Scott Spencer told the jury that, "For farm people, your yard is your castle. That's part of the story here. " Stanley trial exposes problems with jury selection, say legal experts - Saskatoon.

The trial in the death of Saskatchewan First Nations man Colten Boushie is exposing a fundamental flaw in Canada's justice system, say some legal experts. The jury selection process is vulnerable to allegations of racism against Indigenous people, they say. "It invites bias on the basis of race, but also gender and other factors. Canada's prisons are the 'new residential schools'

Canada’s crime rate just hit a 45-year low. It’s been dropping for years—down by half since peaking in 1991. Bizarrely, the country recently cleared another benchmark, when the number of people incarcerated hit an all-time high. Dig a little further into the data, and an even more disquieting picture emerges. While admissions of white adults to Canadian prisons declined through the last decade, Indigenous incarceration rates were surging: Up 112 per cent for women.

Already, 36 per cent of the women and 25 per cent of men sentenced to provincial and territorial custody in Canada are Indigenous—a group that makes up just four per cent of the national population. Teen killed herself at foster home, mother wishes she hadn't obeyed 'their rules' A memo to Canada: Indigenous people are not your incompetent children. When my sister and I were in high school, we thought it was funny to tell our non-Native boyfriends ridiculous things about the rez and see what they believed. We lived on the Six Nations reserve about 25 kilometres southwest of Hamilton, but since the only high school on the rez was Mohawk immersion, and we didn't speak the language, that meant we had to catch the bus into nearby Brantford, Ont. Even though our rez was just a 20-minute drive away, very few of the non-Native kids we went to high school with had ever been there – the exception, of course, being those whose parents considered cheap cigarettes and gas worth the trek.

In other words, most of these kids knew nothing about the rez, or us. Colten Boushie and our insidious white privilege. 'Historic' school system gets grand opening on Wednesday - Manitoba. A new school system operated exclusively by First Nations is ready to make its public debut. Officials and dignitaries will converge on Sgt. Teachers lack confidence to talk about residential schools, study says - Edmonton.

A study suggests that while teachers may want to instruct about residential schools and include Indigenous culture in their classrooms, they don't feel confident enough and are nervous about saying the wrong thing. 'A punch in the gut': Mother slams B.C. high school exercise connecting Indigenous women to 'squaw' UPDATE: Since the CBC ran this story, the publisher, Second Story Press, says the teachers' guide has been removed for review and has apologized for any pain it may have caused. Moose Jaw, Sask., teacher mistakenly hands out assignment with racist terms - CBC News.

A teacher's decision to hand out an extracurricular activity package to some Grade 3 students at a Moose Jaw, Sask., elementary school has been called into question after some racist terms were found in it. An emotional Jesse Wente on the 'remarkable arrogance' of an appropriation prize - Toronto. Rethinking Schools Online. Ukrainian multicultural dance felt 'tokenistic,' says Indigenous dancer - Saskatoon. Newcomers to Canada visit Muskeg Lake Cree Nation to learn about reconciliation - Saskatoon. Chidimma Ukandu admits that, until this weekend, she didn't know much about First Nations people. "Our Coming In Stories: Cree Identity, Body Sovereignty and Gender Self" by Alex Wilson.

Dollarama dream catcher kitsch ‘a slap in the face’ The cultural appropriation debate is over. It's time for action - The Globe and Mail. Policy Options Podcast: Indigenous representation in the media. 'You're different from them': Stories of racial discrimination in Saskatchewan - Saskatchewan. FSIN signs agreement with Elbow, Sask., pledging to eliminate racism in area - Saskatchewan. 'We need your help': rally planned Thursday morning at Gerald Stanley hearing - Saskatoon.