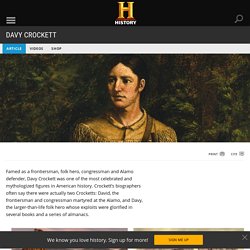 The family followed the patterns of western settlement, moving three times by the time David was twelve. Later, as a young man with a family of his own, Crockett continued this westward movement until he settled in extreme northwest Tennessee. The Yellow Rose of Texas: A Growing Legend. A frame from author Douglas Brode's graphic novel Yellow Rose of Texas: The Myth of Emily Morgan captures the moments after the Texas heroine stepped from Santa Anna's tent, having distracted the Mexican general into defeat at the 1836 Battle of San Jacinto. 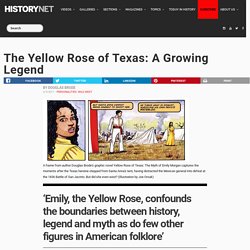 But did she even exist? (Illustration by Joe Orsak) Her name may have been Emily D. West or Emily Morgan. Famous Texans. Lone Star History Links. Susannah Dickinson - Facts & Summary. Located near San Antonio, the fort known as the Alamo was built in the early 1700s as a Franciscan mission. 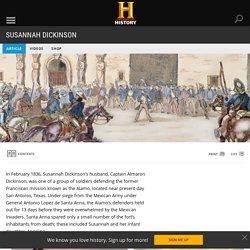 Later abandoned, the mission was occupied by Spanish troops at various times after 1800; as it stood in a cottonwood grove, the fort was called “El Alamo” after the Spanish word for that tree. In December 1835, the Texan volunteers who captured San Antonio occupied the Alamo. Though Sam Houston, the newly appointed commander of the Texan forces, argued that San Antonio should be abandoned due to the lack of sufficient troops to defend it, the Alamo’s defenders dug in nonetheless, prepared to defend the fort to the last. When Mexican troops arrived in San Antonio in February 1836, Almaron Dickinson moved his wife and daughter into the Alamo.

On February 23, a Mexican force numbering somewhere between 1,800 and 6,000 men (according to various estimates) commanded by General Antonio Lopez de Santa Anna began a siege of the fort.