Kamehameha I - Hawaii History - Monarchs. Kamehameha I c. 1758-1819 Born at Kokoiki in North Kohala on the island of Hawai`i, Kamehameha descended from chiefs of Hawai`i and Maui. 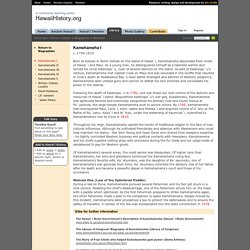 As a young man, he distinguished himself as a talented warrior and served his uncle Kalaniopu`u, ruler of several districts on the island. As part of Kalaniopu`u's retinue, Kamehameha met Captain Cook on Maui and was wounded in the scuffle that resulted in Cook's death at Kealakekua Bay. A keen battle strategist and admirer of Western weaponry, Kamehameha later utilized guns and cannon to defeat his own enemies and consolidate his power in the Islands. Kamehameha the Great - Pu`ukoholā Heiau National Historic Site. King Kamehameha was one of the most striking figures in Hawaiian history, a leader who united and ruled the islands during a time of great cultural change. 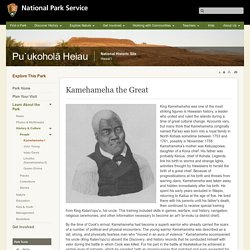 Accounts vary, but many think that Kamehameha (originally named Pai'ea) was born into a royal family in North Kohala sometime between 1753 and 1761, possibly in November 1758. Kamehameha's mother was Kekuiapoiwa, daughter of a Kona chief. His father was probably Keoua, chief of Kohala. Legends link his birth to storms and strange lights, activities thought by Hawaiians to herald the birth of a great chief. Because of prognostications at his birth and threats from warring clans, Kamehameha was taken away and hidden immediately after his birth. By the time of Cook's arrival, Kamehameha had become a superb warrior who already carried the scars of a number of political and physical encounters.

Hotu Matua. Summarized from a version published in Thomas S. 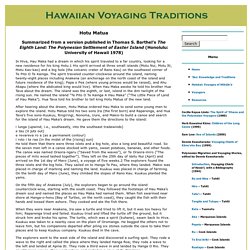 Barthel’s The Eighth Land: The Polynesian Settlement of Easter Island (Honolulu: University of Hawaii 1978) In Hiva, Hau Maka had a dream in which his spirit traveled to a far country, looking for a new residence for his king Hotu.1 His spirit arrived at three small islands (Motu Nui, Motu Iti, Motu Kao-kao) and a big hole (the volcanic crater of Rano Kau) on the southwest corner of Te Pito O Te Kainga. The spirit traveled counter-clockwise around the island, naming twenty-eight places including Anakena (an anchorage on the north coast of the island and future residence of the king); Papa o Pea (where young princes would be raised), and Ahu Akapu (where the abdicated king would live). 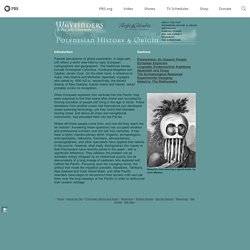 The traditional heroes include Christopher Columbus, Ferdinand Magellan and Captain James Cook. On the other hand, a reference to Kupe, Hotu Matu'a and Mo'ikeha, legendary voyagers who sailed by 1000 AD to, respectively, the distant islands of New Zealand, Easter Island and Hawai'i, would probably evoke no recognition. When European explorers first ventured into the Pacific they were surprised to find that island after island was occupied by thriving societies of people still living in the age of stone.

These wanderers from another ocean had themselves just developed ocean-spanning technology, yet they found that islanders lacking metal, and above all ships and navigational instruments, had preceded them into the Pacific. Where did these people come from, and how did they reach the far islands? Voyaging into history. THOR HEYERDAHL EXPEDITIONS and ARCHAEOLOGY OF THE PACIFIC PEOPLES. And Early Life Thor Heyerdahl is a world-renowned explorer and archaeologist. 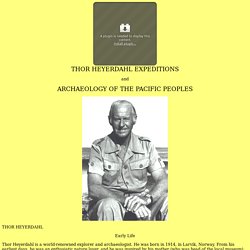 He was born in 1914, in Larvik, Norway. From his earliest days, he was an enthusiatic nature lover, and he was inspired by his mother (who was head of the local museum) to take an interest in zoology and nature. Early explorers - Early explorers. Pacific migrations. A quick, easy summary Read the Full Story Exploring the Pacific The Pacific was the first ocean to be explored. 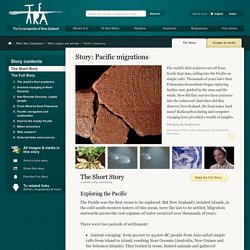 But New Zealand’s isolated islands, in the cold south-western waters of this ocean, were the last to be settled. Migration eastwards across the vast expanse of water occurred over thousands of years. There were two periods of settlement: Ancient voyaging: from 50,000 to 25,000 BC people from Asia sailed simple rafts from island to island, reaching Near Oceania (Australia, New Guinea and the Solomon Islands). The Lapita people The Lapita were the first to reach Remote Oceania. Polynesian explorers About 3,000 years ago Polynesian culture developed in West Polynesia. Reaching New Zealand Using small islands as stepping-stones, explorers finally discovered New Zealand. The original migrants came from a region in East Polynesia which Māori later called Hawaiki. You've read the short story, now. Te Ara Encyclopedia of New Zealand – Te Ara – The Encyclopedia of New Zealand is a comprehensive guide to our peoples, natural environment, history, culture, economy and society.