Australian Government Disaster Assist. Page Content This website provides information on assistance for current disasters as well as links to assistance and response to previous disasters that have impacted Australians, both in Australia and overseas. 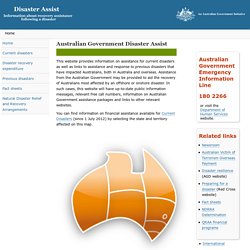 Assistance from the Australian Government may be provided to aid the recovery of Australians most affected by an offshore or onshore disaster. In such cases, this website will have up-to-date public information messages, relevant free call numbers, information on Australian Government assistance packages and links to other relevant websites. You can find information on financial assistance available for Current Disasters (since 1 July 2012) by selecting the state and territory affected on this map. Disaster recovery assistance The support and assistance provided by the Australian Government for each disaster is tailored to the needs of the affected community.Disasters before 1 July 2012 are on the Previous ​Disasters page. Please provide feedback. Ash Wednesday 1983. Victoria's natural environments are some of the most fire-prone areas in the world. 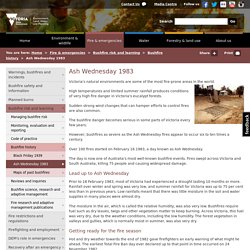 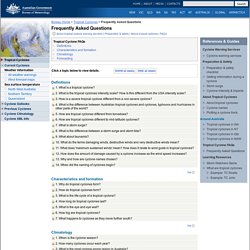 What is a tropical cyclone? A tropical cyclone is defined as a non-frontal low pressure system of synoptic scale developing over warm waters having organised convection and a maximum mean wind speed of 34 knots or greater extending more than half-way around near the centre and persisting for at least six hours. Every cyclone is unique varying according to a number of factors including life cycle, intensity, movement, size and impact (wind, storm surge and flooding).

Satellite image of cyclone Kalunde showing a well developed eye surrounded by the eye wall and spiral bands of convection. 2. The severity of a tropical cyclone is described in terms of categories ranging from 1 (weakest) to 5 (strongest) related to the maximum mean wind speed as shown in this table. Note: corresponding approximate wind gusts and central pressure are also provided as a guide. Further detail: Tropical cyclone intensity 3. 4. 5. 6. 7. Further details: Storm Surge 8. 9. See: Tsunami warnings 10. 11. 12. 13. 14. Tsunami Frequently Asked Questions. What is a tsunami? 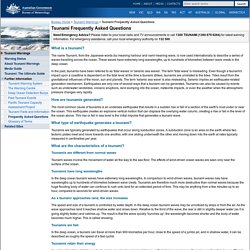 The name Tsunami, from the Japanese words tsu meaning harbour and nami meaning wave, is now used internationally to describe a series of waves travelling across the ocean. These waves have extremely long wavelengths, up to hundreds of kilometres between wave crests in the deep ocean. In the past, tsunamis have been referred to as 'tidal waves' or 'seismic sea waves'. The term 'tidal wave' is misleading. 2004: Thousands die in Asian tsunami.

2004: Thousands die in Asian tsunami Massive sea surges triggered by an earthquake under the Indian Ocean have killed over 10,000 people in southern Asia, with many more feared dead. 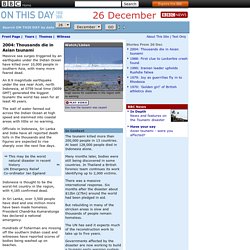 An 8.9 magnitude earthquake under the sea near Aceh, north Indonesia, at 0759 local time (0059 GMT) generated the biggest tsunami the world has seen for at least 40 years. The wall of water fanned out across the Indian Ocean at high speed and slammed into coastal areas with little or no warning. Officials in Indonesia, Sri Lanka and India have all reported death tolls in the thousands and the figures are expected to rise sharply over the next few days.

Indonesia is thought to be the worst-hit country in the region, with 4,185 confirmed dead. In Sri Lanka, over 3,500 people have died and one million more have been made homeless. Hundreds of fisherman are missing off the southern Indian coast and witnesses have reported scores of bodies being washed up on beaches. Australian Broadcasting Corporation - /stories/mosaic. Cyclone Yasi. Category five Cyclone Yasi crossed the far north Queensland coast near Mission Beach, between Cairns and Townsville, in the early hours of the morning on February 3, 2011, bringing peak wind gusts estimated at 285 kilometres per hour. 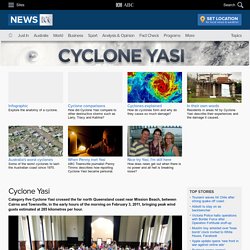 Gallery: Cyclone Yasi The massive storm destroyed homes, shredded crops and smashed marinas and island resorts as it roared ashore. Because it was such a large, strong storm, Yasi maintained considerable intensity as it tracked inland into the state's north-west, finally weakening to a tropical low near Mount Isa more than 20 hours after it crossed the coast. While the towns of Cardwell, Tully, Mission Beach, Innisfail and many surrounding townships were badly damaged, the far north's major cities, Cairns and Townsville, escaped relatively unscathed. 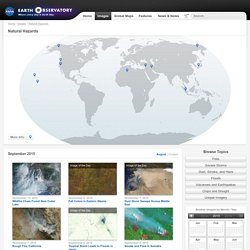