Birdwatching Trip Report from Istanbul, Turkey. Istanbul is justifiably famous as a place to watch migrating raptors, especially in autumn. 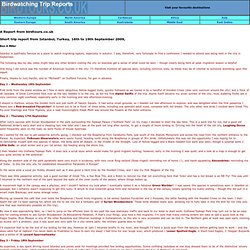 I was, therefore, very fortunate to find a conference I needed to attend was being held in the city in September. The following day-by-day notes might help any other birders visiting the city on business get a sense of what could be seen – though clearly being here at peak migration season is helpful! One thing I did notice was the number of American tourists in the city; I’ll therefore mention all species seen, including common ones, as these may be of interest to someone stumbling upon this report. Finally, thanks to Jurij Hanžel, and to “MichaelF” on Surfbird Forums, for gen in advance. Day 1 – Wednesday 16th September First birds from the plane window as I flew in were ubiquitous Yellow-legged Gulls, quickly followed as we taxied in by a handful of Hooded Crows (also very common around the city) and a flock of 40 Jackdaw.

Day 2 – Thursday 17th September Day 3 – Friday 18th September Trip List. First casual, then blizzard birding: mid-winter in Istanbul. (with contributions by Lesley Starke) During my annual trip to South Africa, it has become customary to first find the cheapest plane ticket, and thereafter see how I can maximize my lifelist gains. 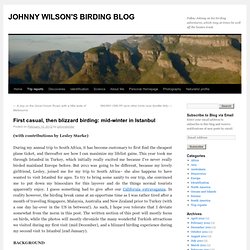 This year took me through Istanbul in Turkey, which initially really excited me because I’ve never really birded mainland Europe before. But 2011 was going to be different, because my lovely girlfriend, Lesley, joined me for my trip to South Africa– she also happens to have wanted to visit Istanbul for ages. To try to bring some sanity to our trip, she convinced me to put down my binoculars for this layover and do the things normal tourists apparently enjoy. I guess something had to give after our California extravaganza. Istanbul is one of the most historically significant cities in the world. Despite its massive population, Istanbul has much to offer travelling birders, even in winter. Key birding resources Svensson, L., Zetterstrom, D. & Mullarney, K. 2010. Istanbul bird checklist - Avibase - Vogel-Kontrolllisten der Welt. Tours » Istanbul Circle. A – Hills along the Bosphorus The narrow sea strait between Europe and Asia pushes all bird migration happen over this narrow corridor. 5 months a year, bird migration can be enjoyed. 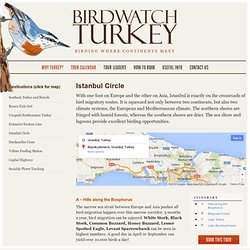 White Stork, Black Stork, Common Buzzard, Honey Buzzard, Lesser Spotted Eagle, Levant Sparrowhawk can be seen in highest numbers. A good day in April or September can yield over 10.000 birds a day! B – Belgrade Forest An early morning visit to this mature beack/oak forest yields a good collection of forest birds, including Marsh Tit, Hawfinch and Short-toed Treecreeper. Black Sea Coast This is the place to look for divers, waterfowl, gulls and terns. C – Lake Terkos The wooded shores of the lake gives a good feeling to be out in nature. D – Lake Büyükçekmece. Bird observations in Istanbul and the Adana region of Turkey on May 30th-June 8th, 2010, with photographs, by Glenn Morris. Where to watch birds around Istanbul. Where to watch birds around Istanbul, based on the author’s stay in the city October 2004 – July 2005. 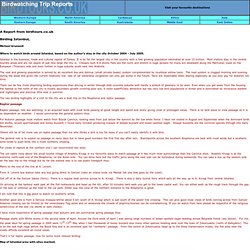 Istanbul is the business, trade and cultural capital of Turkey. It is by far the largest city in the country with a fast growing population estimated at over 15 million. Most visitors stay in the central touristy areas and are not aware of just how large the city is. Cheaply built 6-8 storey flats are the norm and stretch in huge sprawls for many km westward along the Marmaran coast on the European (Thracian) side and even further in huge suburbs south east into Anatolia. The vast and growing population is served by an excellent bus and dolmus (small private buses) system complemented by countless yellow taxis.

There can be few more dispiriting birding experiences than driving in winter through drab concrete suburbs with hardly a stretch of greenery to be seen. The two birding highlights of a visit to the city are a boat trip on the Bosphorus and raptor passage. Raptor passage From 4. Istanbul and the Bosphorus - BirdForum Opus. From Opus Photo by WintibirdThe Blue Mosque. 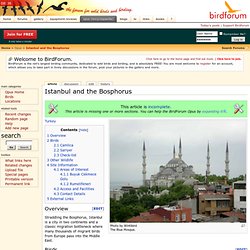 Turkey [edit] Overview Straddling the Bosphorus, Istanbul is a city in two continents and a classic migration bottleneck where many thousands of migrant birds from Europe pass into the Middle East. [edit] Birds Raptors are the main attraction for the many birders that visit Istanbul each year and most European species pass through although some peak at different times. In addition to raptors both storks occur in thousands and many smaller birds such as European Nightjar, Wryneck and European Bee-eater and passerines including chats, warblers and buntings. Yelkouan Shearwater and Cory's Shearwater can be seen on the Bosphorus and in the city of Istanbul Laughing Dove and Black Kite are common as are Alpine Swift and Pallid Swift. The most popular watchpoints are the hills of Camlica on the Asiatic side of the Bosphorus. [edit] Camlica Camlica can be reached by taking the southerly suspension bridge across the water and following signs to Camlica.