Volcano - Indonesia 1883. On an early May morning in 1883, the captain of the German warship Elisabeth spotted a cloud of ash and dust rising above the uninhabited island of Krakatau. 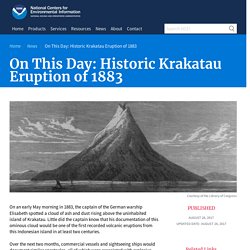 Little did the captain know that his documentation of this ominous cloud would be one of the first recorded volcanic eruptions from this Indonesian island in at least two centuries. Over the next two months, commercial vessels and sightseeing ships would document similar spectacles, all of which were associated with explosive noises and churning black clouds to sightings of incandescent ash and pumice. Scientific expeditions were also launched. The local inhabitants on the neighboring islands of Java and Sumatra were so impressed with the display, that a near-festive environment took shape. Only later did they realize that these awe-inspiring displays were a prelude to one of the largest eruptions in history. Volcano - Mount Saint Helens 1980. At 8:32 a.m. 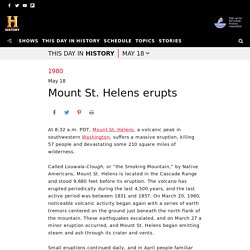 PDT, Mount St. Helens, a volcanic peak in southwestern Washington, suffers a massive eruption, killing 57 people and devastating some 210 square miles of wilderness. Called Louwala-Clough, or “the Smoking Mountain,” by Native Americans, Mount St. Helens is located in the Cascade Range and stood 9,680 feet before its eruption. The volcano has erupted periodically during the last 4,500 years, and the last active period was between 1831 and 1857. Small eruptions continued daily, and in April people familiar with the mountain noticed changes to the structure of its north face. Earthquake - Mexico City, 1985. The powerful earthquake killed more than 10,000 and left another 30,000 others injured and as many as a quarter of a million people homeless. 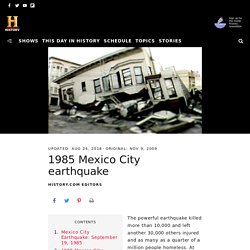 At around 7:19 a.m. on September 19, 1985, Mexico City, one of the world’s largest urban areas, was jolted by a magnitude 8.1 earthquake, one of the strongest to ever hit the area. The quake was centered off the Pacific coast of Michoacán, more than 200 miles west of Mexico City, the nation’s capital. However, much of the damage was in Mexico City, which was constructed on an ancient lake bed whose soft sediments amplify seismic waves. Mexico City Earthquake: September 19, 1985 More than 10,000 people died as a result of the quake, some 30,000 others were injured and an estimated 250,000 people were left homeless. 1985 Mexico City Earthquake: Slow Government Response Mexico’s president, Miguel de la Madrid (1934-2012), was criticized for his government’s weak response to the disaster. Tornado - Joplin, MO 2011. The Joplin Tornado was a catastrophic EF5 tornado that struck Joplin, Missouri in the late afternoon of Sunday, May 22, 2011. 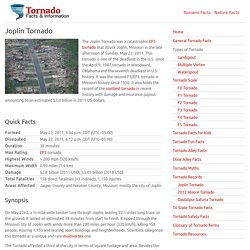 This tornado is one of the deadliest in the U.S. since the April 9, 1947 tornado in Woodward, Oklahoma and the seventh-deadliest in U.S. history. It was the second F5/EF5 tornado in Missouri history since 1950. It also holds the record of the costliest tornado in recent history with damage and insurance payout amounting to an estimated $2.8 billion in 2011 US dollars. Quick Facts Synopsis On May 22nd, a ¾-mile-wide twister tore through Joplin, leaving 22.1 miles long trace on the ground. Tornadoes - Moore Oklahoma. On May 20, 2013, one of the deadliest tornadoes in Oklahoma’s history raked a 14-mile path of destruction through the southern areas of Oklahoma City and decimated the city of Moore, causing $2 billion worth of damage. 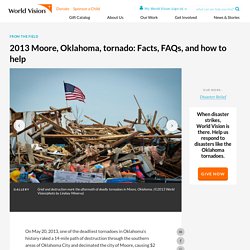 It flattened one elementary school, where no fatalities occurred, then hit another school, where a wall collapsed and killed seven children. The Moore, Oklahoma, tornado was categorized as an EF5, a rare twister packing estimated wind speeds greater than 200 mph. It killed 24 people and created a swath of destruction, including 300 demolished homes. Less than two weeks later, the largest ever-recorded tornado — coupled with severe rain and flooding — struck central Oklahoma and caused further damage and loss of life, killing nine during the tornado and 14 people in the flooding.

Brief history of Oklahoma tornadoes Oklahoma typically experiences around 60 tornadoes a year. FAQs: What you need to know about the 2013 Moore, Oklahoma, tornado What was the El Reno tornado? Hurricane Katrina - August 2005. On August 23rd, a tropical depression formed over the southeastern Bahamas, becoming Tropical Storm Katrina on August 24th as it moved into the central Bahamas. 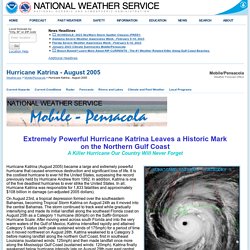 The storm continued to track west while gradually intensifying and made its initial landfall along the southeast Florida coast on August 25th as a Category 1 hurricane (80mph) on the Saffir-Simpson Hurricane Scale. After moving west across south Florida and into the very warm waters of the Gulf of Mexico, Katrina intensified rapidly and attained Category 5 status (with peak sustained winds of 175mph) for a period of time as it moved northwest on August 28th. Katrina weakened to a Category 3 before making landfall along the northern Gulf Coast, first in southeast Louisiana (sustained winds: 125mph) and then made landfall once more along the Mississippi Gulf Coast (sustained winds: 120mph). 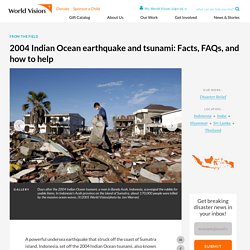 The magnitude 9.1 quake ruptured a 900-mile stretch of fault line where the Indian and Australian tectonic plates meet. It was a powerful megathrust quake, occurring where a heavy ocean plate slips under a lighter continental plate. The quake caused the ocean floor to suddenly rise by as much as 40 meters, triggering a massive tsunami.