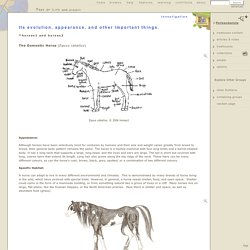 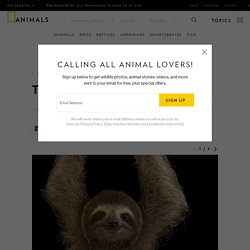 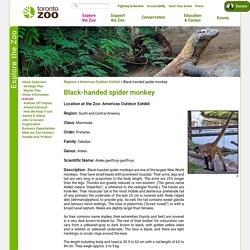 Adaptations - The Siberian Tiger. Adaptations to a Semi-Aquatic Life. Beavers have adaptations for living on land and in water. 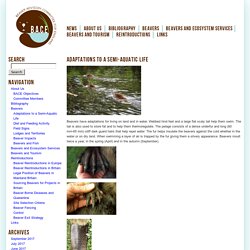 Webbed hind feet and a large flat scaly tail help them swim. The tail is also used to store fat and to help them thermoregulate. The pelage consists of a dense underfur and long (60 mm-65 mm) stiff dark guard hairs that help repel water. The fur helps insulate the beavers against the cold whether in the water or on dry land. When swimming a layer of air is trapped by the fur giving them a silvery appearance.

Other adaptations to an amphibious lifestyle include eyes, ears and nostrils placed high on the head so they can maintain vigilance when swimming. The ears too have special muscles that allow the ears to fold flat, thereby preventing water from entering. Adaptations - Help The Red Pandas. Peregrine Falcon. What Adaptations Do Beavers Have to Survive? The beaver is a mainly nocturnal, semiaquatic rodent known for building dams and lodges. 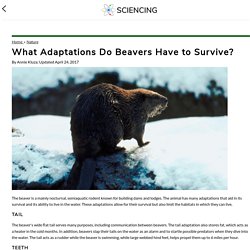 The animal has many adaptations that aid in its survival and its ability to live in the water. These adaptations allow for their survival but also limit the habitats in which they can live. Tail The beaver's wide flat tail serves many purposes, including communication between beavers. The tail adaptation also stores fat, which acts as a heater in the cold months. Teeth The beaver's well-known big buckteeth are an adaptation that helps them gain access to food as well as dam and lodge-building materials they would not be able to get otherwise.

Heat Conservation. Raccoon. Location, Habitat and Diet Raccoons can be found all across the United States, and can be found as far north as central Canada and extending south as far as Argentina. 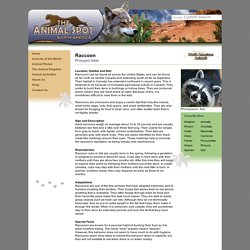 Their habitat in Canada has extended northward in recent years. This is believed to be because of increased agricultural activity in Canada. They prefer to build their dens in buildings or hollow trees. They are nocturnal, which means they are most active at night. Raccoons are omnivores and enjoy a varied diet that includes insects, small birds, eggs, nuts, fruit, grains, and small vertebrates. Special Characteristics & Adaptations of a Sloth. Chimpanzee Adaptation. Chimpanzees have a number of adaptations that help them to survive and succeed in their natural environment. 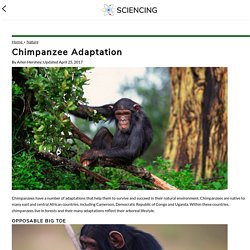 Chimpanzees are native to many east and central African countries, including Cameroon, Democratic Republic of Congo and Uganda. Within these countries, chimpanzees live in forests and their many adaptations reflect their arboreal lifestyle. Opposable Big Toe The chimpanzee's foot has an opposable big toe, which serves just like a thumb on a hand. The big toe grabs branches while climbing through trees and can hold other items. Sharp Canine Teeth A chimpanzee's sharp canines come in handy in a variety of ways. Arms. Koala - Adaptation Assignment. What Adaptations Do Zebras Have in Their Habitats? Zebra have adapted to their habitats in several ways. 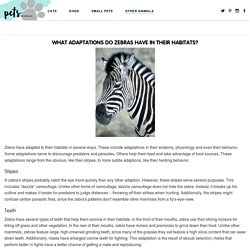 These include adaptations in their anatomy, physiology and even their behavior. Some adaptations serve to discourage predators and parasites. Others help them feed and take advantage of food sources. These adaptations range from the obvious, like their stripes, to more subtle adaptions, like their herding behavior. Teeth. Adaptations. Kangaroo Adaptations - Kangaroo Facts and Information. Exploring the many elements of Kangaroo adaptations over time is quite amazing. 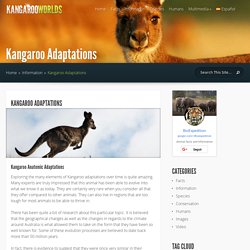 Many experts are truly impressed that this animal has been able to evolve into what we know it as today. They are certainly very rare when you consider all that they offer compared to other animals. They can also live in regions that are too tough for most animals to be able to thrive in. There has been quite a bit of research about this particular topic.

It is believed that the geographical changes as well as the changes in regards to the climate around Australia is what allowed them to take on the form that they have been so well known for. Unquestionably Intriguing Adaptations of Snowy Owls. Additionally, the snowy owl's arsenal comprises sharp claws and an equally sharp beak. 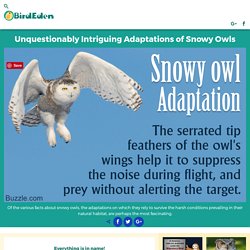 The former helps it grab its prey even when it is in flight, or beneath snow or vegetation, while the latter helps it tear its prey when feeding. And then there are some behavioral adaptations which are common to species found in cold regions, such as reducing activity to minimize energy requirements, eating a lot to match energy requirements, and opportunistic feeding. Interestingly, a single snowy owl eats 8 - 12 lemmings a day. The snowy owl is one of the most important members of the tundra food chain. It plays a crucial role in curbing the growth of rodents when it migrates to the south in winter. Lion Adaptations: Lesson for Kids. UWL Website. Let’s take a look at a few of the adaptations that these tarantulas have made in order to succeed and thrive in their environments!

Like all members of the phylum Arthropoda, Brachypelma vagans are Ecdysozoans, meaning they molt (Dor-2012). This adaptation allows B. vagans to shed their outer layer of skin, making room for further growth and better protection. This may take anywhere from 2-12 hours. The Environment & Adaptations of Tigers. There are six surviving subspecies of tiger: Amur tiger, Bengal tiger, Indochinese tiger, Malayan tiger, South China tiger and Sumatran tiger. Although they all live in slightly different environments, the areas in which they live are fairly similar. Sadly, tigers' natural habitats are being rapidly destroyed, causing these beautiful creatures' populations to decline.

Range Despite their dwindling numbers, tigers are fairly widely distributed, although their current range is just 7 percent of its former size. They can be found in Bangladesh, Bhutan, Cambodia, China, India, Indonesia, Laos, Malaysia, Myanmar, Nepal, Russia, Thailand and Viet Nam. The Bald Eagle's Adaptations. Adaptations for survival - Black african RhinoCeros. Siberian Tiger: Adaptation To Environment by Ahmad El-Zein on Prezi. LLAMAs ADAPTATION by on Prezi. Spider Monkey Climate Adaptation by Gabriel Diaz on Prezi. Adaptations of Monkeys for the Jungle. Despite its lush vegetation and abundance of life, a jungle can be a harsh and inhospitable environment. Adaptations. Important Adaptations Photo: Rachael Barger The Giant Panda has many adaptations that helps it survive in the conditions that it lives in.

Most of these adaptations are because of the Bamboo that the Panda eats to survive. Adaptations. Seaworld. Swimming and Wading. The Adaptations of Elephants for Survival. Survival Adaptations - American Peregrine Falcon. Brown Bear.