My Interview With The World’s Youngest Ibogaine Provider. At 27, Shea Prueger is the world’s youngest ibogaine provider, and since the May 2013 opening of her clinic in Koh Samui, Thailand, the former model has received countless death threats, her house has been broken into, and she was attacked in an alley. 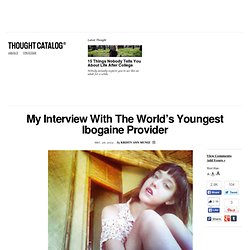 Encountering this kind of behavior is expected when working with anything deemed a Schedule 1 Narcotic (illegal) in America, especially one that has a reputation of getting junkies clean. Shea, who first heard of ibogaine when battling her own opiate addiction, is in the process of opening a new center in Thailand. I managed to track down the American expat via email, in the treehouse she’s currently living in, to chat about how ibogaine works, why she’s being threatened, and what to expect from her new center. You're Doing Everything Wrong, According To The Internet. Any good Internet writer knows that big, sweeping statements grab the most attention. 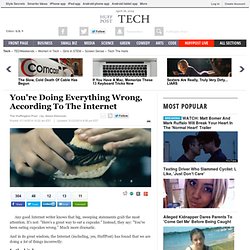 It's not: "Here's a great way to eat a cupcake. " Instead, they say: "You've been eating cupcakes wrong. " Much more dramatic. And in its great wisdom, the Internet (including, yes, HuffPost) has found that we are doing a lot of things incorrectly: In the kitchen Eating apples Eating cupcakes Peeling oranges Eating pomegranates Boiling eggs Making sandwiches Eating Chinese takeout Eating chicken wings Using a Keurig machine Eating Tic Tacs Cooking pasta Peeling bananas.

To show J. Meta tags - Webmaster Tools Help. The Man Who Invented Email. If you’re reading this, you’re online and, as such, you probably have an email account. But have you ever wondered about the origins of email? It’s not exactly a cut-and-dried case, as various forms of electronic messaging have been around since the humble telegraph. I had the opportunity to sit down with V.A. Shiva Ayyadurai, who holds the first copyright for “EMAIL”—a system he began building in 1978 at just 14 years of age. It was modeled after the communication system being used at the University of Medicine and Dentistry in Newark, New Jersey. And with that, email—as we currently know it—was born. In 1981, Shiva took honors at the Westinghouse Science Awards for his “High Reliability, Network-Wide, Electronic Mail System” and attended MIT later that fall. (LIST: Ten of the Shortest-Lived Tech Products Ever) Here’s the interview: Shiva: It was purely out of the love of doing it.

Limor. Bookmarks. Brought to you by Out There Radio, your weekly podcast for the Occult, Conspiracy Theories, Hidden History, and everything else that makes the world such a strange place. 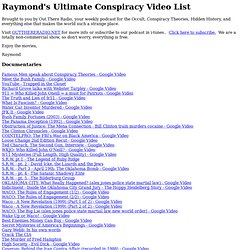 Visit OUTTHERERADIO.NET for more info or subscribe to our podcast in i-tunes.. Click here to subscribe. Tamil Police Corruption caught on camera. Page 2 - How to make your own personal media cloud using free programs and an old PC. The phrase “cloud-based computing” has gotten a lot of hype over the past few years. 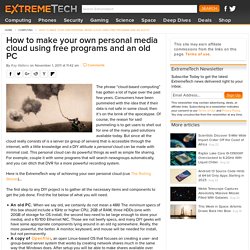 Consumers have been pummeled with the idea that if their data is not safe in some cloud, then it’s on the brink of the apocalypse. Of course, the reason for said pummeling is to get users to shell out for one of the many paid solutions available today. But since all the cloud really consists of is a server (or group of servers) that is accessible through the internet, with a little knowledge and a DIY attitude a personal cloud can be made with minimal cost. 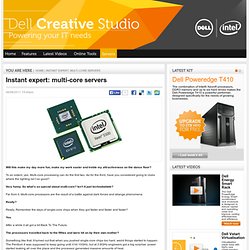 To an extent, yes. Multi-core processing can do the first two. As for the third, have you considered going to clubs where the lighting isn’t so good? Very funny. So what’s so special about multi-core? Far from it. Really? Really. Yes. After a while it all got a bit Back To The Future. Technology - How to Make Instructables - Offset 18. How To Use HTML Meta Tags. Want top search engine rankings? 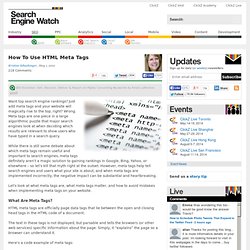 Just add meta tags and your website will magically rise to the top, right? Wrong. Meta tags are one piece in a large algorithmic puzzle that major search engines look at when deciding which results are relevant to show users who have typed in a search query. While there is still some debate about which meta tags remain useful and important to search engines, meta tags definitely aren't a magic solution to gaining rankings in Google, Bing, Yahoo, or elsewhere – so let's kill that myth right at the outset. However, meta tags help tell search engines and users what your site is about, and when meta tags are implemented incorrectly, the negative impact can be substantial and heartbreaking.