Books to read. What is Flash Memory? - Definition from Techopedia. Flash memory was first introduced in 1980 and developed by Dr. 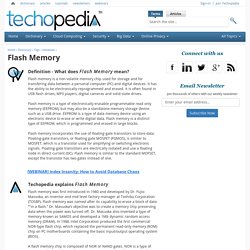 Fujio Masuoka, an inventor and mid level factory manager at Toshiba Corporation (TOSBF). Flash memory was named after its capability to erase a block of data “"in a flash.” Dr. Masuoka’s objective was to create a memory chip preserving data when the power was turned off. Dr. Flash memory. An opened USB Flash drive. 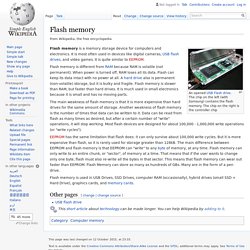 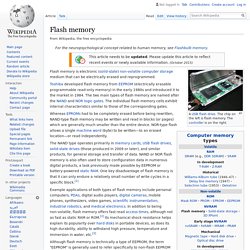 Flash memory is electronic (solid-state) non-volatile computer storage medium that can be electrically erased and reprogrammed. Toshiba developed flash memory from EEPROM (electrically erasable programmable read-only memory) in the early 1980s and introduced it to the market in 1984. The two main types of flash memory are named after the NAND and NOR logic gates. The individual flash memory cells exhibit internal characteristics similar to those of the corresponding gates. Whereas EPROMs had to be completely erased before being rewritten, NAND-type flash memory may be written and read in blocks (or pages) which are generally much smaller than the entire device.

The NAND type operates primarily in memory cards, USB flash drives, solid-state drives (those produced in 2009 or later), and similar products, for general storage and transfer of data. History[edit] Principles of operation[edit] NOR flash[edit] 1.2 Flash memory. 19 Flash memory. OCR GCSE Computing: Memory - Topic 4. Books to Read. What is Virtual Memory (VM)? - Definition from Techopedia. In the 1940’s and 1950’s, prior to VM, large programs implemented logic to manage primary and secondary storage. 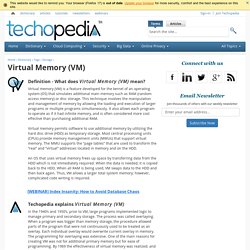 The process was called overlaying. When a program was bigger than memory storage, the procedure allowed parts of the program that were not continuously used to be treated as an overlay. Each individual overlay would overwrite current overlay in memory. The programming for overlaying was extensive. One of the main reasons for creating VM was not for additional primary memory but for ease of programming. 19_Activity1. Virtual memory. The program thinks it has a large range of contiguous addresses; but in reality the parts it is currently using are scattered around main memory, and the inactive parts are saved in a disk file. 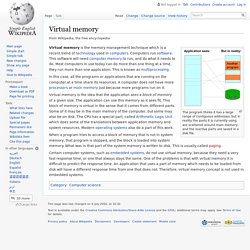 Virtual memory is the memory management technique which is a recent trend of technology used in computers. Computers run software. This software will need computer memory to run, and do what it needs to do. Most computers in use today can do more than one thing at a time, they run more than one application. This is known as multiprocessing. In this case, all the programs or applications that are running on the computer at a time share its resources.

Virtual memory is the idea that the application sees a block of memory of a given size. Virtual memory. Virtual memory combines active RAM and inactive memory on DASD[NB 1] to form a large range of contiguous addresses. 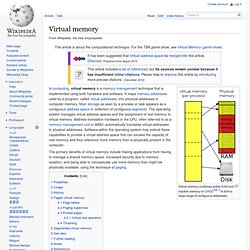 In computing, virtual memory is a memory management technique that is implemented using both hardware and software. It maps memory addresses used by a program, called virtual addresses, into physical addresses in computer memory. Main storage as seen by a process or task appears as a contiguous address space or collection of contiguous segments. The operating system manages virtual address spaces and the assignment of real memory to virtual memory. 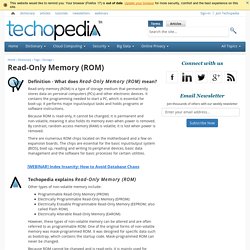 One of the original forms of non-volatile memory was mask-programmed ROM. It was designed for specific data such as bootstrap, which contains the startup code. Mask-programmed ROM can never be changed. Because ROM cannot be changed and is read-only, it is mainly used for firmware. ROM may also be referred to as maskROM (MROM). Some ROM is non-volatile but can be reprogrammed, this includes: What is Random Access Memory (RAM)? - Definition from Techopedia. There are two main types of RAM: dynamic random access memory (DRAM), or Dynamic RAM, and static random access memory (SRAM). 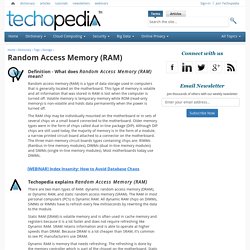 The RAM in most personal computers (PC’s) is Dynamic RAM. All dynamic RAM chips on DIMMs, SIMMs or RIMMs have to refresh every few milliseconds by rewriting the data to the module. Static RAM (SRAM) is volatile memory and is often used in cache memory and registers because it is a lot faster and does not require refreshing like Dynamic RAM. SRAM retains information and is able to operate at higher speeds than DRAM. Read-only memory. Read-only memory (or simply ROM) is a type of computer memory. 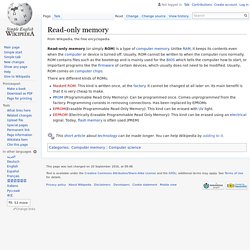 Unlike RAM, it keeps its contents even when the computer or device is turned off. Usually, ROM cannot be written to when the computer runs normally. ROM contains files such as the bootstrap and is mainly used for the BIOS which tells the computer how to start, or important programs like the firmware of certain devices, which usually does not need to be modified.

Usually, ROM comes on computer chips. There are different kinds of ROMs: Masked ROM: This kind is written once, at the factory. Random-access memory. A stick of DDR3 RAM for laptops Random access memory (or simply RAM) is the memory or information storage in a computer that is used to store running programs and data for the programs. 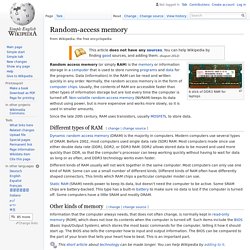 Data (information) in the RAM can be read and written quickly in any order. Normally, the random access memory is in the form of computer chips. Usually, the contents of RAM are accessible faster than other types of information storage but are lost every time the computer is turned off. Computer memory. In computing, memory refers to the computer hardware devices used to store information for immediate use in a computer; it is synonymous with the term "primary storage". Computer memory operates at a high speed, for example random-access memory (RAM), as a distinction from storage that provides slow-to-access program and data storage but offers higher capacities.

If needed, contents of the computer memory can be transferred to secondary storage, through a memory management technique called "virtual memory". An archaic synonym for memory is store.[1] Typical secondary storage devices are hard disk drives and solid-state drives. History[edit] Detail of the back of a section of ENIAC, showing vacuum tubes Two alternatives to the delay line, the Williams tube and Selectron tube, originated in 1946, both using electron beams in glass tubes as means of storage.