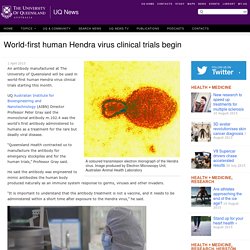 UQ Australian Institute for Bioengineering and Nanotechnology (AIBN) Director Professor Peter Gray said the monoclonal antibody m.102.4 was the world’s first antibody administered to humans as a treatment for the rare but deadly viral disease. “Queensland Health contracted us to manufacture the antibody for emergency stockpiles and for the human trials,” Professor Gray said.

He said the antibody was engineered to mimic antibodies the human body produced naturally as an immune system response to germs, viruses and other invaders. “It is important to understand that the antibody treatment is not a vaccine, and it needs to be administered within a short time after exposure to the Hendra virus,” he said. Professor Peter Gray from The University of Queensland on Vimeo. View Queensland Health's media release here. DAFF_QLD_GOV_AU - MAI 2013 - Hendra virus Information for horse owners, handlers, competitors and event organisers. Nell Zink’s ‘The Wallcreeper’ is the Debut Novel of the Year. It opens with a wallcreeper — a small, beautiful, and territorial bird found in Eurasia — and a miscarriage. 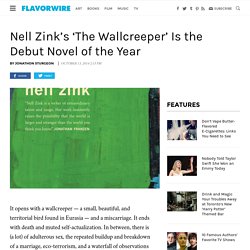 It ends with death and muted self-actualization. In between, there is (a lot) of adulterous sex, the repeated buildup and breakdown of a marriage, eco-terrorism, and a waterfall of observations about contemporary social and romantic life wrapped in an excruciating wit that suggests its author, Nell Zink, is anything but a novice. The Wallcreeper, in fact, is the best debut novel of the year by an American author, and it should be read and discussed by anyone who cares about young life in the 21st century. Not much is known about Nell Zink: this much is confirmed by the scant publicity materials and coverage afforded to her work thus far. She appears to have been “discovered” — at least in America — by Jonathan Franzen, a fellow birder. Given that The Wallcreeper was written as a letter for Franzen (as a kind of dare), there is no shortage of birding metaphors. "The Wallcreeper" by Nell Zink, recommended by...

Nell Zink: there’s a clear distinction between taking your career seriously and taking your writing seriously. A first encounter with Nell Zink can leave you reeling. 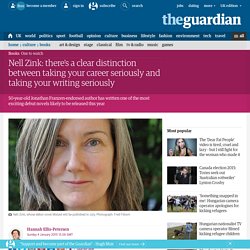 It’s not simply that her life story features a brief stint in an Italian artists’ commune, starting up a post-punk fanzine in the 1990s and birdwatching with Jonathan Franzen, or that, age 50, she has written one of the most exciting debut novels that will be published this year. It’s not even that a week after her conversation with the Guardian, she emailed a nude photograph of herself, posing artistically by a German piano.

No, it is that the world view of Zink is so startlingly unique, at once almost alienating in its oddness and dazzling in its rarity, that you leave the conversation feeling like your own life is frankly dull and one dimensional. Indeed, Franzen, widely considered to be one of the great American authors writing today, who can also be credited for discovering Zink, recently said her work “insistently raises the possibility that the world is larger and stranger than the world you think you know”. Spillover: Animal Infections and the Next Human Pandemic by David Quammen. The next big and murderous human pandemic, the one that kills us in millions, will be caused by a new disease--new to humans, anyway. 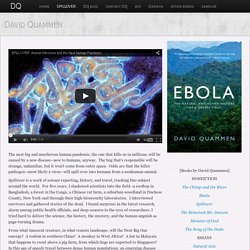 The bug that's responsible will be strange, unfamiliar, but it won't come from outer space. Odds are that the killer pathogen--most likely a virus--will spill over into humans from a nonhuman animal. Spillover is a work of science reporting, history, and travel, tracking this subject around the world. For five years, I shadowed scientists into the field--a rooftop in Bangladesh, a forest in the Congo, a Chinese rat farm, a suburban woodland in Duchess County, New York-and through their high-biosecurity laboratories.