Best Open Source CSS3 and jQuery Image Captions. The use of image captions within HTML has been a long-standing tradition among web developers. 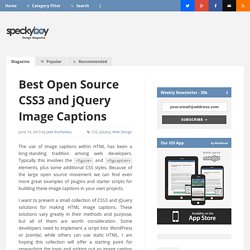 Typically this involves the <figure> and <figcaption> elements, plus some additional CSS styles. Because of the large open source movement we can find even more great examples of plugins and starter scripts for building these image captions in your own projects. I want to present a small collection of CSS3 and jQuery solutions for making HTML image captions. These solutions vary greatly in their methods and purpose, but all of them are worth consideration. Label every thing! Cross Browser Animated Captions. See the Demo! 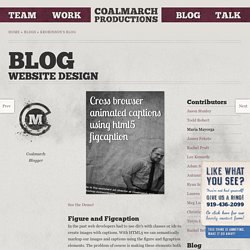 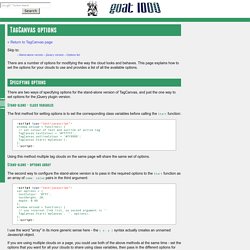 This page explains how to set the options for your clouds to use and provides a list of all the available options. Specifying options There are two ways of specifying options for the stand-alone version of TagCanvas, and just the one way to set options for the jQuery plugin version. Stand-alone - class variables The first method for setting options is to set the corresponding class variables before calling the Start function: <script type="text/javascript"> window.onload = function() { // set colour of text and outline of active tag TagCanvas.textColour = '#ffffff'; TagCanvas.outlineColour = '#ff9999'; TagCanvas.Start('myCanvas'); }; </script> Using this method multiple tag clouds on the same page will share the same set of options. 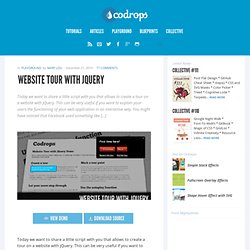 This can be very useful if you want to explain your users the functioning of your web application in an interactive way. You might have noticed that Facebook used something like […] View demoDownload source. 8 simple CSS3 transitions that will wow your users. CSS3 has introduced countless possibilities for UX designers, and the best thing about them is that the coolest parts are really simple to implement. 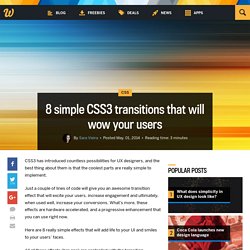 Just a couple of lines of code will give you an awesome transition effect that will excite your users, increase engagement and ultimately, when used well, increase your conversions. What’s more, these effects are hardware accelerated, and a progressive enhancement that you can use right now. Annotation Overlay Effect with jQuery. The offline cookbook - JakeArchibald.com. When AppCache arrived on the scene it gave us a couple of patterns to make content work offline. 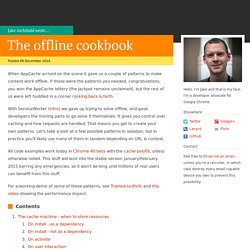 If those were the patterns you needed, congratulations, you won the AppCache lottery (the jackpot remains unclaimed), but the rest of us were left huddled in a corner rocking back & forth. With ServiceWorker (intro) we gave up trying to solve offline, and gave developers the moving parts to go solve it themselves. It gives you control over caching and how requests are handled. That means you get to create your own patterns. Let's take a look at a few possible patterns in isolation, but in practice you'll likely use many of them in tandem depending on URL & context. Simple Effects for Drop-Down Lists. Online JavaScript beautifier. Javascript Canvas Unit Circle Vizualized. Jquery Words Rotator - Setup plugin.

But it is also often neglected. In this article, I have compiled the most awesome jQuery plugin to take total control of your site typography. FitText.js FitText is a simple jQuery plugin that automatically make a text fit the width of its parent element. Lettering.js Although CSS3 and the @font-face directive have definitely improved web typography, it doesn’t offer complete down-to-the-letter control. Kern.js. Inspiration for Text Styles and Hover Effects. Hexagon Grid with zoom and Content open. Hover Effect Ideas. Good CSS Editors for Linux (Ubuntu) There are many good CSS editors for Linux. 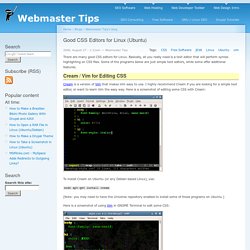 Basically, all you really need is a text editor that will perform syntax highlighting on CSS files. Some of the programs below are just simple text editors, while some offer additional features. Cream / Vim for Editing CSS Cream is a version of Vim that makes Vim easy to use. I highly recommend Cream if you are looking for a simple text editor, or want to learn Vim the easy way. CSS3 Text Animation Effect. Inspiration for Article Intro Effects. We may define a food to be any substance which will repair the functional waste of the body, increase its growth, or maintain the heat, muscular, and nervous energy. 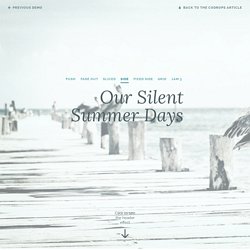 In its most comprehensive sense, the oxygen of the air is a food; as although it is admitted by the lungs, it passes into the blood, and there re-acts upon the other food which has passed through the stomach. It is usual, however, to restrict the term food to such nutriment as enters the body by the intestinal canal. Simple animated hover effect for images using CSS3 and HTML. 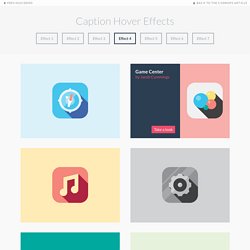 Hover.css - A collection of CSS3 powered hover effects. All Hover.css effects make use of a single element (with the help of some pseudo-elements where necessary), are self contained so you can easily copy and paste them, and come in CSS, Sass, and LESS flavours. Many effects use CSS3 features such as transitions, transforms and animations. Old browsers that don't support these features may need some extra attention to be certain a fallback hover effect is still in place. Licenses Hover.css is made available under a free personal/open source or paid commercial licenses depending on your requirements. To compare licenses please visit the Ian Lunn Design Limited Store and purchase a commercial license. Personal/Open Source. A Collection of Page Transitions.

CSS Reference. Andreapace/wordsrotator · GitHub. AZFonts. Fonts and TeX - TeX Users Group. In principle, TeX can use any font for which it has metrics (character widths, kerning, etc.), and shapes (these days, generally PostScript Type 1 or TrueType or OpenType). A couple notable articles on basic font concepts and usage in LaTeX: For additional information of all kinds: Font licensing is a perennial and troublesome topic. The freely available fonts listed below are under a variety of licenses; some commonly-used licenses for fonts are listed separately. Computer Modern: Getting to specifics, the first and still most prevalent typeface in the TeX world is Computer Modern, developed by Donald Knuth using his novel Metafont program, which comes with TeX. Other Modern: Variants of Computer Modern have been created which cover letters and symbols from virtually all other Latin-based languages, as well translating the characters into PostScript Type 1 fonts, etc.

Font samplers. SVG Editor. Animated line drawing in SVG - JakeArchibald.com. Posted 29 July 2013 using tired fingers There's a demo you're missing here because JavaScript or inline SVG isn't available. I like using diagrams as a way of showing information flow or browser behaviour, but large diagrams can be daunting at first glance. When I gave talks about the Application Cache and rendering performance I started with a blank screen and made the diagrams appear to draw themselves bit by bit as I described the process. Here's how it's done: Web & mobile development, graphic design company - HTML5 Canvas Javascript Libraries.

Making SVGs Responsive with CSS. An article on how to make embedded SVGs cross-browser responsive. We're going to cover embedding techniques, how to apply the "Padding Hack" and how to use inline media queries to make SVGs adaptive. An SVG can be embedded on a web page in many ways; one of which is embedding it inline in an HTML5 page using the <svg> tag. The other commonly used techniques include embedding it as an image using the <img> tag, embedding it using the <object> tag, using an iframe, and as a CSS background image. Conceptually, making an SVG scale as its container scales should be as simple as removing any fixed height and/or width, and specifying a viewBox attribute value. However, due to different browser implementations and inconsistencies, the web isn’t all ponies and rainbows, and making SVGs fluid isn’t quite that straightforward, because the way browsers determine the dimensions of an SVG when embedded in different ways isn’t consistent across all of them.