The Scientific Technique That Will Double Your Learning Speed. You're busy. 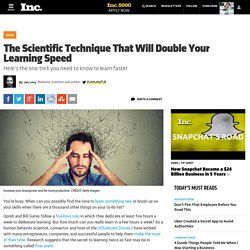 When can you possibly find the time to learn something new or brush up on your skills when there are a thousand other things on your to-do list? Oprah and Bill Gates follow a five-hour rule, in which they dedicate at least five hours a week to deliberate learning. But how much can you really learn in a few hours a week?

As a human behavior scientist, connector, and host of the Influencers Dinner, I have worked with many entrepreneurs, companies, and successful people to help them make the most of their time. Research suggests that the secret to learning twice as fast may be in something called flow state. Flow state is similar to being "in the zone," a phrase people use to describe their peak performance, when they're completely absorbed in the activity they are doing and effortlessly handle it as a result. Learning how to hack into flow state can increase your productivity, accelerate learning, and boost creativity. 1. 2. 3.

On Flipboard. Optimizely X Plans. Webtrends - Customers and Users. Deep Learning. Neural networks and deep learning. OpenAI Universe. How we structure our work and teams at Basecamp – Signal v. Noise. Why Companies Adopt Microservices And How They Succeed – Medium. These are issues faced by many companies at some point in their lifetime. 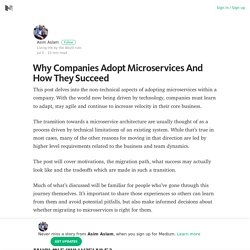 From a business standpoint it becomes clear that the current organisational structure and technical architecture will mostly likely hinder the progress of the company in the long term. The day 1 goal of the company still stands true. To deliver a quality product in the shortest space of time possible. However the company is now being limited more so by itself than the market or it’s competitors. At this point it becomes clear that there’s a need to address these issues so the company can be structured in a way that will enable it to execute and scale. The Road To Re-architecture It’s not about technology, it’s about people The motivations are clear but before pursuing any path it’s important to begin by discussing the existing issues with those directly affected. The team. Every part of the organisation will be affected differently.

Seek Out Expertise This doesn’t necessarily mean looking to consulting firms. Prototyping. A Journey into Microservices. Starting Small Hailo, like many startups, started small; small enough that our offices were below deck on a boat in central London–the HMS President. 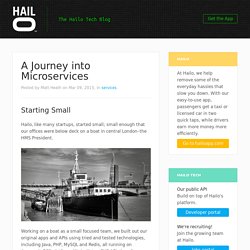 Working on a boat as a small focused team, we built out our original apps and APIs using tried and tested technologies, including Java, PHP, MySQL and Redis, all running on Amazon’s EC2 platform. We built two PHP APIs (one for our customers, and one for our drivers) and a Java backend which did the heavy lifting–real time position tracking, and geospatial searching. After we launched in London, and then Dublin, we expanded from one continent to two, and then three; launching first in North America, and then in Asia.

This posed a number of challenges–the main one being locality of customer data. At this point we were running our infrastructure in one AWS region; if a customer used our app in London and then flew to Ireland, no problem–their data was still close enough. Going Global However, this was merely the first step on our journey. “My God! QCONSP2015 / Microservices architecture from legacy – Medium. At Netflix: Stop system problems before they start. Beginning In 2012, Netflix began adopting microservices. 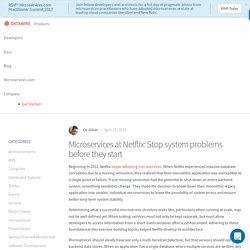 When Netflix experienced massive database corruption due to a missing semicolon, they realized that their monolithic application was susceptible to a single point of failure. If one missing semicolon had the potential to shut down an entire backend system, something needed to change. They made the decision to break down their monolithic legacy application into smaller, individual microservices to lower the possibility of system errors and ensure better long-term system stability.

Determining what a successful microservice structure looks like, particularly when running at scale, may not be well-defined yet. When scaling, services must not only be kept separate, but must allow developers to access information from a short-lived container after a job has ended. Microservices should ideally have not only a multi-tiered architecture, but that services should not share backend data stores.

Breaking the Monolith – Ronen Agranat – Medium. The dream of migrating a legacy system to a micro-service architecture borders on fantasy, oft portrayed as it is in blogs and podcasts as the holy grail of software engineering, sought by enthusiastic and sometimes over-ambitious development teams from dorm rooms to corporate behemoths, often with mixed results. 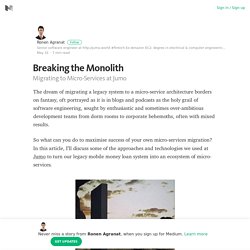 So what can you do to maximise success of your own micro-services migration? In this article, I’ll discuss some of the approaches and technologies we used at Jumo to turn our legacy mobile money loan system into an ecosystem of micro-services. What makes a micro-service? Micro-services is an approach to system architecture arising from the convergence of several technologies: Journal - Cushion.