Beginner to Beginner Queen Rearing. You can learn to produce your own queens using this small, but scalable system. 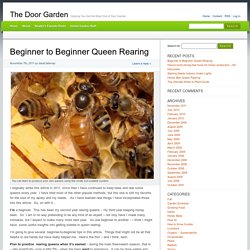 I originally wrote this article in 2011, since then I have continued to keep bees and rear some queens every year. I have tried most of the other popular methods, but this one is still my favorite for the size of my apiary and my needs. As I have learned new things I have incorporated those into this article. So, on with it… I’m a beginner. I’m going to give several beginner-to-beginner tips in this article. Plan to practice rearing queens when it’s easiest – during the main flow/swarm season, that is – late April/Early June in Mid TN – when the bees want to reproduce. The Basic Principle of Honey Bee Queen Rearing Any queenless hive of honey bees will try to make a new queen if it has the resources to do so. So if you want to raise a new queen, all you really have to do is create a hive without a queen which has eggs or very young larva, and let the bees do the rest. A few Queen Rearing terms you should know: Apis mellifera in the PhilippinesPollination by Honeybees in the Philippines.

European honeybees (Apis mellifera) are not native to the Philippines and were introduced by beekeepers because potentially they can produce lots of honey. 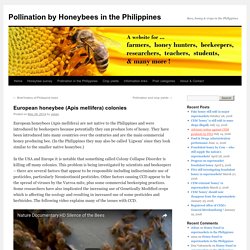 They have been introduced into many countries over the centuries and are the main commercial honey producing bee. (In the Philippines they may also be called ‘Ligwan’ since they look similar to the smaller native honeybee.) In the USA and Europe it is notable that something called Colony Collapse Disorder is killing off many colonies. This problem is being investigated by scientists and beekeepers – there are several factors that appear to be responsible including indiscriminate use of pesticides, particularly Neonicotinoid pesticides. Other factors causing CCD appear to be the spread of viruses by the Varroa mite, plus some commercial beekeeping practices.

So far CCD does not appear to be affecting the European honeybee colonies in the Philippines. Scientific Beekeeping. Isle of Man Beekeepers. Apis cerana. Apis cerana, or the Asiatic honey bee (or the eastern honey bee), is a species of honey bee found in southern and southeastern Asia, including China, Pakistan, India, Korea, Japan, Malaysia, Nepal, Bangladesh, Papua New Guinea and Solomon Islands. 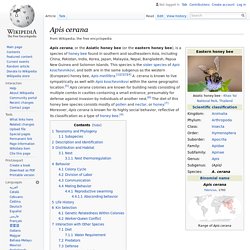 This species is the sister species of Apis koschevnikovi, and both are in the same subgenus as the western (European) honey bee, Apis mellifera.[1][2][3][4] A. cerana is known to live sympatrically as well with Apis koschevnikovi within the same geographic location.[5] Apis cerana colonies are known for building nests consisting of multiple combs in cavities containing a small entrance, presumably for defense against invasion by individuals of another nest.[6] The diet of this honey bee species consists mostly of pollen and nectar, or honey.[7] Moreover, Apis cerana is known for its highly social behavior, reflective of its classification as a type of honey bee.[4] Taxonomy and Phylogeny[edit] Subspecies[edit] (following Engel, 1999).

Nest[edit] Apis dorsata. Apis dorsata, the giant honey bee, is a honey bee of South and Southeast Asia, found mainly in forested areas such as the Terai of Nepal and sometimes even in Malaysia and Singapore. 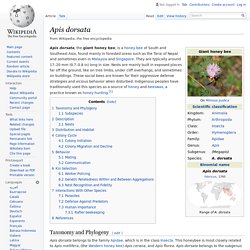 They are typically around 17–20 mm (0.7–0.8 in) long in size. Nests are mainly built in exposed places far off the ground, like on tree limbs, under cliff overhangs, and sometimes on buildings. These social bees are known for their aggressive defense strategies and vicious behavior when disturbed. Indigenous peoples have traditionally used this species as a source of honey and beeswax, a practice known as honey hunting.[1] Apis dorsata. 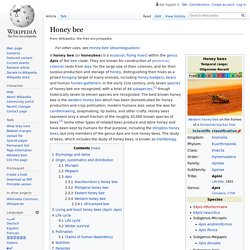 Java Bees Bee keeping in central Java, Indonesia. Traditional beekeepingPollination by Honeybees in the Philippines. Traditional beekeeping for the Ligwan and other ‘hive bees’ ‘Hive bees’ are those bees that naturally make their colonies inside holes in trees or in the ground, and so can be kept inside a hollowed out tree trunk or basket or box or pot of some kind that can be made from many different materials. 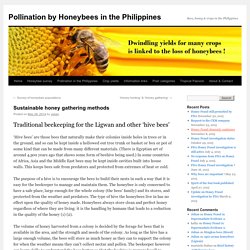 (There is Egyptian art of around 4,500 years ago that shows some form of beehive being used.) In some countries of Africa, Asia and the Middle East bees may be kept inside cavities built into house walls. Inspiring bali activists on Pinterest. APICULTURE. Bees & Beekeeping. Canadian Cone Escape. Clearer Boards (Bee Escape Boards) The terms "Clearer" Board and "Escape" board are used interchangeably on this page and other pages on this site that deal with escapes. 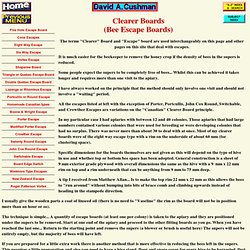 It is much easier for the beekeeper to remove the honey crop if the density of bees in the supers is reduced. Some people expect the supers to be completely free of bees... Whilst this can be achieved it takes longer and requires more than one visit to the apiary. I have always worked on the principle that the method should only involve one visit and should not involve a "waiting" period. All the escapes listed at left with the exception of Porter, Portcullis, John Cox Round, Switchable, and Crowther Escapes are variations on the "Canadian" Clearer Board principle. In my particular case I had apiaries with between 12 and 40 colonies.