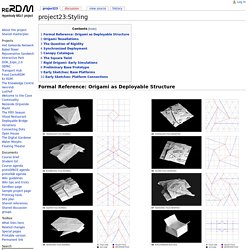 The “Water Bomb” origami tessellation pattern stems from the basic origami square twist, which features four perpendicular pleats. Here, the Water Bomb pattern is used as the basis for the styling of an optional canopy for the Deployable Bridge. The canopy can follow the deployment of the base nearly through its full rotation, and its components are contained in the storage space of the base platforms (◘). The Question of Rigidity The position and angle of rotation of the canopy panels are based on the crease pattern of the Water Bomb pattern.

Synchronized Deployment Synchronized deployment of base and optional canopy enables shelter from sun and rain throughout the transformations of the Deployable Bridge. Jun MITANI. License Anyone can use the crease patterns on this page freely without any permissions under the Creative Commons Attribution 4.0. 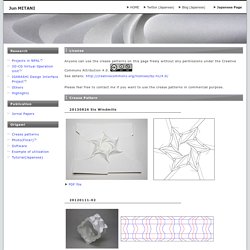 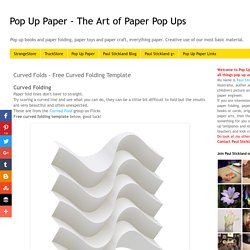 Try scoring a curved line and see what you can do, they can be a little bit difficult to fold but the results are very beautiful and often unexpected. Curved Folds - Free Curved Folding Template. This site has TONS of templates for cards, boxes, etc. Great find!!!! So excited. Pop up! a manual of paper mechanisms - duncan birmingham (tarquin b... How To Make An Amazing Kirigami Pop Up Card Tutorial. VSN Specialty Card Folds eArticle. Specialty Card Fold Techniques: Tired of your basic 4 1/4" x 5 1/2" single fold card? 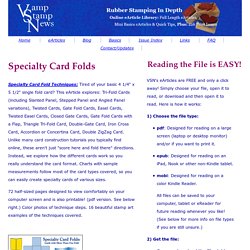 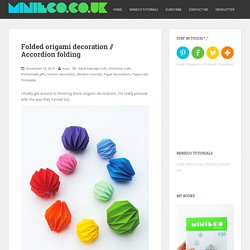 I’m really pleased with the way they turned out. I’ve started stringing them on to some fairy lights but they would look just as great as Christmas tree decorations. They are surprisingly sturdy too! Pop-ups & Paper Sculpture on Pinterest. Kaleidocycle {aka folding paper toy!} Have you ever made a kaleidocycle before? 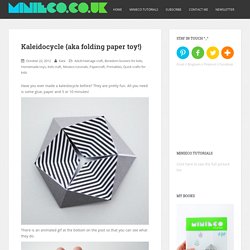 They are pretty fun. All you need is some glue, paper and 5 or 10 minutes! There is an animated gif at the bottom on the post so that you can see what they do. There are also instructions & a template below too ^_^ – Template – Paper or thin card – Glue – Scissors – Ruler and needle for scoring 1. The animated gif is a bit shaky. By the way, check out this free download (courtesy of my cousins band) which contains: trick or treat poster, DIY ‘creeps’ mask, high quality MP3 and exclusive video art.

And, Helen, from Curlybirds just put together a ‘vintage Halloween costume‘ post on her site. Paper Models of Hebdomicontadissaedron. The hebdomicontadissadron (heptaconadihedron) is a sphere like polyhedron(with 72 faces). 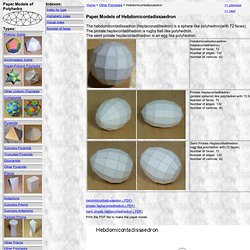 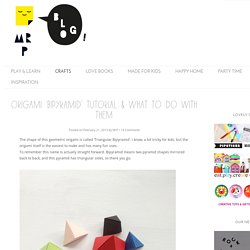 I know, a bit tricky for kids, but the origami itself is the easiest to make and has many fun uses. To remember this name is actually straight forward. Bipyramid means two pyramid shapes mirrored back to back, and this pyramid has triangular sides, so there you go. Here’s how: Cut a strip of paper with an even width. Fold backward at the end of the triangle and repeat fold like an accordion. Fold the straight lines between the diagonals again to change the fold direction. Form the ‘Triangular Bipyramid’ by rolling the shape along. Wrap around the faces a couple of times to form a solid shape, trim off the end triangle and insert the final triangle part into a slit to close it up. Ta-da! Now, here are a few fun ideas using this origami.

You can string them easily by taking out the last triangular piece, placing a string through and closing it up again.