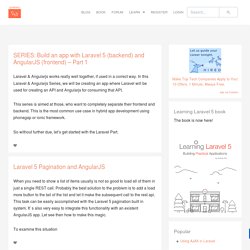 In this Laravel & Angularjs Series, we will be creating an app where Laravel will be used for creating an API and Angularjs for consuming that API. This series is aimed at those, who want to completely separate their frontend and backend. This is the most common use case in hybrid app development using phonegap or ionic framework. So without further due, let’s get started with the Laravel Part. Laravel Homestead as Your Development Environment. There are many ways to setup a local PHP development environment available to us. 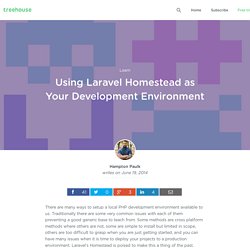 Traditionally there are some very common issues with each of them preventing a good generic base to teach from. Some methods are cross platform methods where others are not, some are simple to install but limited in scope, others are too difficult to grasp when you are just getting started, and you can have many issues when it is time to deploy your projects to a production environment. SitePoint – Learn HTML, CSS, JavaScript, PHP, Ruby & Responsive Design. Quick Tip: Get a Homestead Vagrant VM Up and Running. This quick tip will help you get up and running with a brand new Homestead Improved Vagrant VM. to find out about Vagrant and why you should use it, see this post.Homestead Improved is based on Homestead, but has the added benefit of not forcing you to deal with SSH keys, doesn’t get installed globally, is more cross-platform friendly, and comes with a helper script to auto-configure the shared folders.I recommend creating a new Homestead Improved VM for every new project, and this tutorial will follow such a practice. 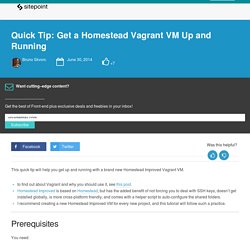 Prerequisites You need: The tutorial assumes you’ll be using a bash-like terminal; Git Bash if on Windows (comes with Git Tools). Getting Started The following 3 commands are all that’s necessary for starting a new Homestead Improved VM instance on any operating system (obviously, replace my_project with your desired folder name): git clone my_project cd my_project; mkdir Project/public bin/folderfix.sh The first two clone the project and enter the newly created folder. Bear CSS - Helping you build a solid stylesheet foundation based on your markup. IFrame removed on saving or editor toggle. GamepadAPI. Web Gamepad API (Draft Recommendation) Abstract The HTML5 specification introduces many of the necessary components for rich interactive and game development, from <canvas> and WebGL to <audio> and <video>. 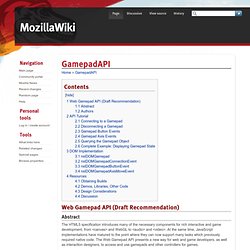 At the same time, JavaScript implementations have matured to the point where they can now support many tasks which previously required native code. The Web Gamepad API presents a new way for web and game developers, as well as interaction designers, to access and use gamepads and other controllers for games. This API is currently in Editor's Draft status at the W3C, and will be subject to change. Authors Ted Mielczarek (@TedMielczarek) Jason Orendorff (@jorendorff) David Humphrey (@humphd) Kevin Gadd (@antumbral) API Tutorial. Readability index calculator Result.

Thorleif's SOMA page. Sending big files the easy way - WeTransfer. "Simple Image Gallery" Plugin IE Problems .. Please Read.. Fotisevangelou wrote: Since this is purely a styling issue, you should know that Solarflare does indeed use the XML declaration which is not recommended at all by any professional web developer or designer. 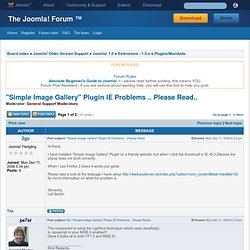 The XML declaration does nothing to Firefox, but it "shifts" IE in quirks mode, which means that IE does not interpret HTML/CSS as it should. So, no, Simple Image Gallery does not display as it should in Solarflare. But that is not our problem. We provide the plugin with some eye-catching styling, but anyone is free to adjust this to suit their needs. (mt) Media Temple > KnowledgeBase > Home. Learn CSS Positioning in Ten Steps: position static relative absolute float. 1. position:static The default positioning for all elements is position:static, which means the element is not positioned and occurs where it normally would in the document. 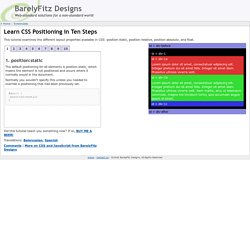 Normally you wouldn't specify this unless you needed to override a positioning that had been previously set. 2. position:relative If you specify position:relative, then you can use top or bottom, and left or right to move the element relative to where it would normally occur in the document. Let's move div-1 down 20 pixels, and to the left 40 pixels: Notice the space where div-1 normally would have been if we had not moved it: now it is an empty space. It appears that position:relative is not very useful, but it will perform an important task later in this tutorial. 3. position:absolute. JavaScript Cheat Sheet - Added Bytes. A quick reference guide for JavaScript, listing methods and functions, and including a guide to regular expressions and the XMLHttpRequest object. 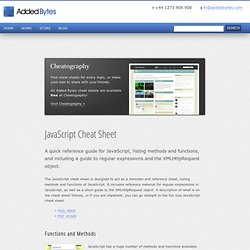