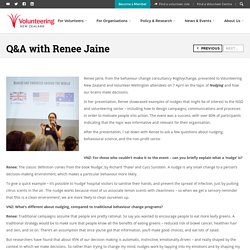 In her presentation, Renee showcased examples of nudges that might be of interest to the NGO and volunteering sector – including how to design campaigns, communications and processes in order to motivate people into action. The event was a success, with over 80% of participants indicating that the topic was informative and relevant for their organisation. After the presentation, I sat down with Renee to ask a few questions about nudging, behavioural science, and the non-profit sector.

VNZ: For those who couldn’t make it to the event – can you briefly explain what a ‘nudge’ is? Renee: The classic definition comes from the book ‘Nudge’, by Richard Thaler and Cass Sunstein. VNZ: What’s different about nudging, compared to traditional behaviour change programs? What is Nudging? - How to Influence an Audience. Today you’re going to see a unique approach to influencing & inspiring an audience – whether its your readers or your organization. 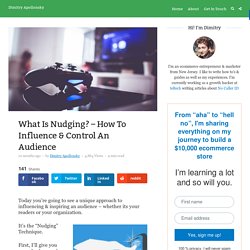 It’s the “Nudging” Technique. First, I’ll give you some background on what nudging is, and how some companies have used nudging to make millions of dollars. Then, I’ll give you some quick tips & pointers for how you can use nudging in your day-to-day life Let’s dive right in. Nudging: Positively Influencing Audiences So What Is A Nudge? Nudges are interventions that steer people in particular directions but that also allow them to go their own way.

If asked “what can we do to make a mouse run across a table?” The nudge approach would be gently lift one end of the table, so it’s easier to run across. A reminder is a nudge; so is a warning. To qualify as a nudge, an intervention must not impose significant material incentives. A subsidy is not a nudge; a tax is not a nudge; a fine or a jail sentence is not a nudge. How companies & organizations use nudging every day. Nudge theory. Nudge is a concept in behavioral science, political theory and behavioral economics which proposes positive reinforcement and indirect suggestions as ways to influence the behavior and decision making of groups or individuals. 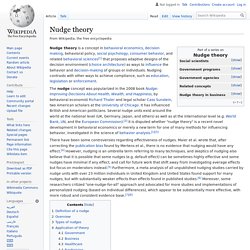 Nudging contrasts with other ways to achieve compliance, such as education, legislation or enforcement. The concept has influenced British and American politicians. Several nudge units exist around the world at the national level (UK, Germany, Japan and others) as well as at the international level (e.g. OECD, World Bank, UN). Definition of a nudge[edit] Example of a nudge: a housefly painted onto the ceramic of a urinal in a men's public toilet The first formulation of the term and associated principles was developed in cybernetics by James Wilk before 1995 and described by Brunel University academic D. In this form, drawing on behavioral economics, the nudge is more generally applied to influence behaviour.

Overview[edit] Types of nudges[edit] Critique[edit] Behavioural economics The limits of nudging. THE behavioural revolution is in full swing, it seems. 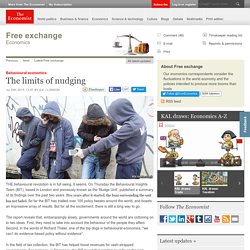 On Thursday the Behavioural Insights Team (BIT), based in London and previously known as the 'Nudge Unit', published a summary of its findings over the past two years. Five years after it started, the buzz surrounding the unit has not faded. So far the BIT has trialled over 100 policy tweaks around the world, and boasts an impressive array of results. But for all the excitement, there is still a long way to go. The report reveals that, embarassingly slowly, governments around the world are cottoning on to two ideas. In the field of tax collection, the BIT has helped boost revenues for cash-strapped governments. Its trials also show what does not work. Policymakers hope that behavioural insights can improve public services and save money. Improving Decisions About Health, Wealth, and Happiness. 'Nudges' help students select healthy lunches.

With back-to-school season in full swing, imagine this: Your child orders lunch via computer and gets a little message saying he or she needs to add more nutritious food groups. 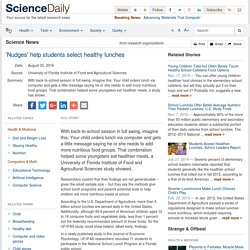 That combination helped some youngsters eat healthier meals, a University of Florida Institute of Food and Agricultural Sciences study showed. Researchers caution that their findings are not generalizable -- given the small sample size -- but they say the methods give school lunch programs and parents potential tools to help children eat more nutritious meals at school. According to the U.S. Department of Agriculture, more than 5 billion school lunches are served daily in the United States. Additionally, although 99.9 percent of American children aged 12 to 18 consume fruits and vegetables daily, less than 1 percent eat the federally recommended amount of those foods.

Two groups of fifth- and sixth-grade students preordered their lunches via computer. The study did not examine actual food consumption.