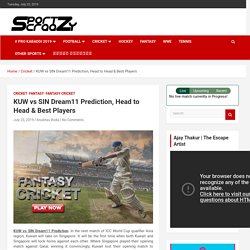 It will be the first time when both Kuwait and Singapore will lock horns against each other. Where Singapore played their opening match against Qatar, winning it convincingly, Kuwait lost their opening match to Malaysia by 42 runs. Chelsea vs Barcelona Dream11 Prediction, Head to Head & Best Players. Chelsea vs Barcelona Dream11 Prediction: Europa League winners Chelsea will be facing La Liga champions FC Barcelona in the Rakuten Cup. 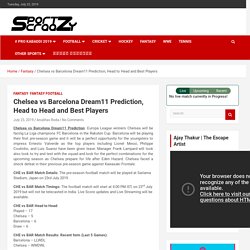 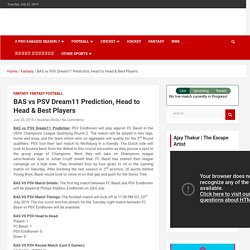 The match will be played in two legs, home and away, and the team which wins on aggregate will qualify for the 3rd Round qualifiers. PSV lost their last match to Wolfsburg in a friendly. The Dutch side will look to bounce back from the defeat in this crucial encounter as they pursue a spot in the group stage of Champions. Next, they will take on Champions league semi-finalists Ajax in Johan Cruyff shield final. FC Basel has started their league campaign on a high note. Pakistan PM promises to develop 'Best Cricket Team of the World' - Pakistan Prime Minister and World Cup winning captain Imran Khan has promised to develop the best cricket team in the world for 2023 World Cup, after Pakistan’s slump in the World Cup 2019, where they missed the semis mark by a whisker. 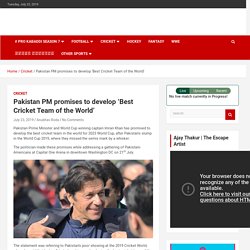 The politician made these promises while addressing a gathering of Pakistani-Americans at Capital One Arena in downtown Washington DC on 21st July. The statement was referring to Pakistan’s poor showing at the 2019 Cricket World, where he said that he has “started working on developing the best cricket team of the world for the next tournament, by bringing the best players in the team”. “Remember my words,” the prime minister iterated during his speech, making the diaspora nostalgic of 1992 World Cup euphoria. Although he didn’t disclose the plan, but looked determined and confident, and had a conviction about his delivry. 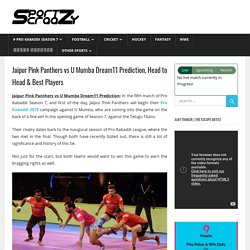 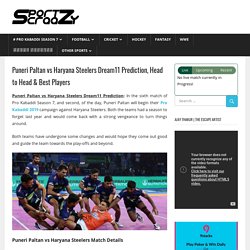 Both the teams had a season to forget last year and would come back with a strong vengeance to turn things around. Both teams have undergone some changes and would hope they come out good and guide the team towards the play-offs and beyond. Puneri Paltan vs Haryana Steelers Match Details The match will be played at Gachibowli Indoor Stadium, Hyderabad on 22nd July. WAS vs WOR Dream11 Prediction, Head to Head & Best Players. WAS vs WOR Dream11 Prediction: Defending champions Worcestershire will take on Warwickshire on 19th July 2019. 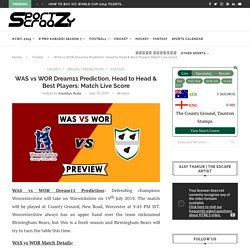 The match will be played at County Ground, New Road, Worcester at 9:45 PM IST. Worcestershire always has an upper hand over the team nicknamed Birmingham Bears, but this is a fresh season and Birmingham Bears will try to turn the table this time. WAS vs WOR Match Details: The cricket match between Worcestershire and Warwickshire will be played on July 19, 2019, at the County Ground, New Road, Worcester. GED vs GZ Dream11 Prediction, Head to Head & Best Players: Match Live Score. GED vs GZ Dream11 Prediction: In the next match of Chinese Super League, Guangzhou R&F will meet Guangzhou Evergrande. 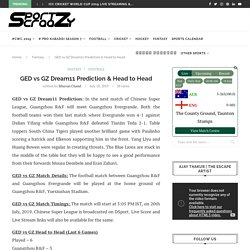 Both the football teams won their last match where Evergrande won 4-1 against Dalian Yifang while Guangzhou R&F defeated Tianjin Teda 2-1. Table toppers South China Tigers played another brilliant game with Paulinho scoring a hatrick and Elkeson supporting him in the front. Yang Liyu and Huang Bowen were regular in creating threats. The Blue Lions are stuck in the middle of the table but they will be happy to see a good performance from their forwards Mousa Dembele and Eran Zahavi. GED vs GZ Match Details: The football match between Guangzhou R&F and Guangzhou Evergrande will be played at the home ground of Guangzhou R&F, Yuexiushan Stadium. GED vs GZ Match Timings: The match will start at 5:05 PM IST, on 20th July, 2019. Kamran Akmal to Imran take strict action against Pakistan Cricket Team. Kamran Akmal to Imran:- Pakistan Cricket Team has been facing a lot of backlashes, owing to their lackluster performance in the ongoing ICC 2019 World Cup. 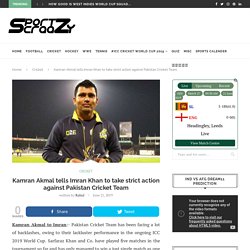 Sarfaraz Khan and Co. have played five matches in the tournament so far and has only managed to win a just single match as one more defeat would see them out of the perennial tournament. In a much-anticipated game against arch-rivals India, Pakistan was defeated miserably, followed which people from across the nation draw criticism against the Pakistani players and have also questioned on the lack of accountability of senior players like Shoaib Malik, Mohammad Hafeez, and Sarfaraz Khan.

Pakistan lost the match by a big margin of 89 runs. Pakistan didn’t show the will to fight as in pursuit of a big total, they lost four wickets in just four over to surrender the game completely. Former players like Shoaib Akhtar and Rameez Raza lashed out at Pakistan players with the former also went to call Sarfaraz as “brainless captain”. Indian Team Orange Jersey in the World Cup clash against England. Indian Team Orange Jersey:- Team India are sitting in a comfortable position at the points table having accomplished three wins out of four. 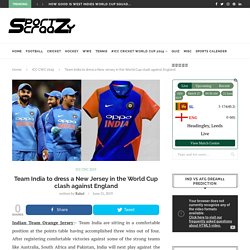 After registering comfortable victories against some of the strong teams like Australia, South Africa and Pakistan, India will next play against the dark horses in the World Cup, namely, Afghanistan and West Indies on 22 and 27th July respectively. Meanwhile, it has been revealed that India will sport an orange jersey in the match against England on 30th June 2019. For the first time ever in a World Cup, the Indian team will wear two jerseys, following the home and away jersey concept introduced by ICC for the ICC World Cup 2019. Yuvraj Singh set to play for Toronto Nationals in Canada T20 league.

India’s one of the greatest limited overs batsmen, Yuvraj Singh is all set to play his first foreign T-20 league assignment, scheduled to start from July 25. Yuvraj Singh, who announced his retirement from International Cricket on June 10, Yuvraj Singh set to play for Toronto Nationals in the Canada T20 league. The Southpaw, of late, was getting offers from different foreign T-20 league due to which he decided to take retirement from International Cricket. The left-handed batsman hasn’t got many chances while playing for Mumbai Indians which perhaps also forced him to take a call on his retirement. The Canada T-20 league will host its second edition which will also feature players like Chris Gayle, Brendon Mccullum, JP Duminy, Andre Russel, Sunil Narine, Fawad Ahmed, Chris Lynn, Dwayne Bravo, Kane Williamson, Faf du Plessis, Shahid Afridi, Darren Sammy, and Shakib Al Hasan.

Imran Khan - Achievements , Personal life , Controversy , Net worth. It is always interesting to know everything about celebrities. The Lion of Lahore, the king of Swing- Imran Khan is popular for being Pakistan’s first and only cricket captain to win the cricket world cup (1992). Imran Khan, whose full name is Imran Ahmed Khan Niazi, is the current prime minister of Pakistan. He is the 22nd Pakistani politician and is the founder and chairman of the Pakistan Tehreek-e-Insaf (PTI). In a nutshell, the 66 years old man is unquestionably the greatest cricketer to emerge from Pakistan, and arguably the world’s second-best allrounder after Garry Sobers.

Steaming in with an angular run-up, Arjun Tendulkar bowled a perfect delivery to Nathan Tilley which hit the deck and swung back into the right-hander only to hit between the middle and off-stump. The video was posted on Lord’s Cricket Ground’s official Twitter Handle, following which it went viral in just 24 hours. India wins FIH Series Finals Gold With 5-1 Thrashing of South Africa. India wins FIH Series Finals:- Team India displayed a clinical performance against South Africa in the FIH final, beating them by 5-0 on Saturday. Out of the five goals, four came from Penalty corners as the world number five, India was too good for South Africa to win the series finale. India scored their first goal as early as in the second minute, with Varun Kumar converting the penalty corner into a goal. In the 11th minute, India was awarded another penalty corner and Harmanpreet Singh made no mistake in adding another goal to India’s kitty. Harmanpreet Singh scored his second goal of the match five minutes from half-time with another penalty strike, making it even worse for South Africa as scoreline went 3-0.

300-Plus Run Chases in World Cup - SportzCraazy. 300-Plus Run Chases in World Cup: In a big a tournament like World Cup, chasing a 300-plus total isn’t a small feat. However, teams have often fought their skins out under pressure circumstances and have managed to chase down totals which never looked like chasable. Imran Khan - Achievements , Personal life , Controversy , Net worth. Virat Kohli becomes the fastest batsman to score 11000 runs in ODI.

Poonam Pandey reply to Pakistani ad: The Mauka Mauka controversy reached a completely new level when Poonam Pandey removed her bralette and offered Pakistani her D-cup. Pakistan has released an Indo pak advertisement, where Indian air force officer Abhinandan was mocked by using his look alike and in the ad with his trademark mustache in blue jersey.

Abhinandan look-alike used the same viral dialogue again and again said by Abhinandan “I’m sorry, I am not supposed to tell you this”. India vs Pakistan Dream11 Prediction, Predicted XI, Team News. India vs Pakistan Dream11 Prediction: If you aren’t a cricket fan, then it’s going to be a better driving experience for you on Sunday, as the arch-rivals, India and Pakistan are set to square up for the seventh time in the World Cups on 16th June at Manchester. India and Pakistan match has never been just a game of Cricket. Marcus Stoinis Ruled Out for Pakistan Match Due to Side Strain. India vs New Zealand Match Prediction, Dream 11 Team. Five Unforgettable Moments of Yuvraj Singh’s Career - SportzCraazy. Four Players Who Can Replace Shikhar Dhawan.

India vs South Africa Dream11 Prediction. Dale Steyn Ruled Out Of the World Cup 2019 Due to Shoulder Injury. Sri Lanka Open Their Account With A 34-Run Win Over Afghanistan. India vs South Africa Preview: India Ready to Hunt a Depleted South Africa. Top 10 Badminton Facts That Will Amaze You - Sportzcraazy. Should Ravindra Jadeja be included in playing XI in World Cup opener? Pro Kabaddi season 7 to begin from July 20. Top 10 most Handsome Kabaddi Players. India's All Time World Cup 11 -