San Antonio Spurs: The Comeback and The Fallback. The Ih-10 rivalry is back for the second round of this year’s NBA playoffs. 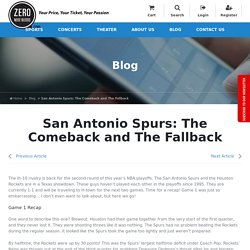 The San Antonio Spurs and the Houston Rockets are in a Texas showdown. These guys haven’t played each other in the playoffs since 1995. They are currently 1-1 and will be traveling to H-town for the next two games. Time for a recap! Game 1 was just so embarrassing… I don’t even want to talk about, but here we go! Game 1 Recap One word to describe this one? By halftime, the Rockets were up by 30 points! Houston even made a franchise postseason record with 22 three-pointers. The Rockets put a 126-99 beating on the Spurs on their own court. Luckily, Tim Duncan came to the rescue.

Game 2 Recap Coach Pop decided to start Pau Gasol over David Lee, which actually worked to our advantage. We all know Leonard is one of the best players in the league because of how he performs on both sides of the court. Parker became the ninth player in NBA postseason history to reach 4,000 career points. What happened to Tony? San Antonio Spurs: Ginobili Gets His Groove Back. Manu Ginobili gets a lot of negative comments because he is 39 years old and is a little “old” for professional basketball. 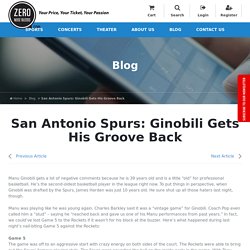 He’s the second-oldest basketball player in the league right now. To put things in perspective, when Ginobili was drafted by the Spurs, James Harden was just 10 years old. He sure shut up all those haters last night, though. Manu was playing like he was young again. Charles Barkley said it was a “vintage game” for Ginobili. Spurs Eliminate Rockets in Game 6. The San Antonio Spurs are headed for the Western Conference Finals to play the Golden State Warriors after defeating the Houston Rockets in Game 6. 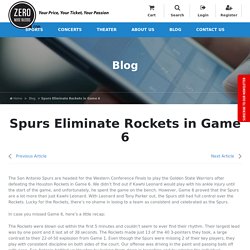 We didn’t find out if Kawhi Leonard would play with his ankle injury until the start of the game, and unfortunately, he spent the game on the bench. However, Game 6 proved that the Spurs are a lot more than just Kawhi Leonard. With Leonard and Tony Parker out, the Spurs still had full control over the Rockets. Western Conference Finals: Game 1 & 2 Recap. Zaza Pachulia, Golden State Warriors’ center, has made the top of the list for the most hated man in San Antonio. 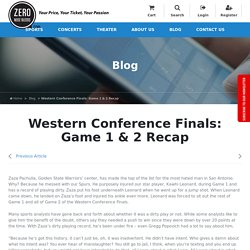 Why? Because he messed with our Spurs. He purposely injured our star player, Kawhi Leonard, during Game 1 and has a record of playing dirty. Zaza put his foot underneath Leonard when he went up for a jump shot. Sports Fandom: Top Super Bowl commercial 2017. Super Bowl in its current form is known for two things – a football extravaganza and a number of memorable commercials. 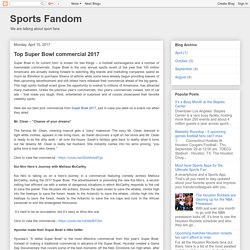 Super Bowl is the only annual sports event of the year that 100 million Americans are actually looking forward to watching. Big brands and marketing companies spend as much as $5million to purchase 30secs of airtime while some have already begun providing teasers of their upcoming advertisement and still others have released their commercial ahead of the big game. This high spirits football event gives the opportunity to market to millions of Americans, has attracted many marketers. Unlike the previous year’s commercials, this year’s commercials viewed, lots of car ads – that made you laugh, think, entertained or surprised and of course showcased their favorite celebrity spots. Here are our best pick commercial from Super Bowl 2017, just in case you were on a snack run when they aired. Dallas Cowboys 2016-17 Season Review. If you are a football enthusiast, I bet you want to see some real American football game. 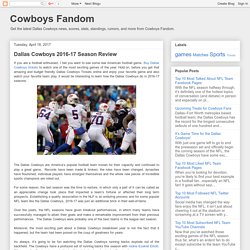 Buy Dallas Cowboys tickets to watch one of the most exciting games of the year. Hold on, before you get that amazing and budget friendly Dallas Cowboys Tickets online and enjoy your favorite game and also watch your favorite team play, it would be interesting to learn how the Dallas Cowboys do in 2016-17 seasons. The Dallas Cowboys are America’s popular football team known for their capacity and continued to play a great game. Records have been made & broken; the rules have been changed, dynasties have flourished; individual players have emerged themselves and the whole new pieces of incredible sports champions are rolled out.

For some reason, the last season was the time to restore, in which only a part of it can be called as an appreciable change took place that impacted a team’s fortune or affected their long term prospects. The 2016-17 NFL Season At A Glance. The 2016-17 NFL season has come and gone! 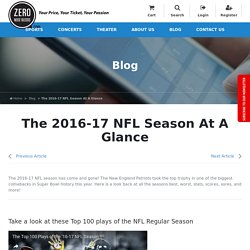 The New England Patriots took the top trophy in one of the biggest comebacks in Super Bowl history this year. Here is a look back at all the seasons best, worst, stats, scores, sores, and more! Take a look at these Top 100 plays of the NFL Regular Season The 2016-17 season marks the 97th season in NFL history! It commenced on September 8th, 2016. San Antonio Spurs: Road to Playoffs.

The San Antonio Spurs are currently ranked second in the league (59-17) – falling right under the Golden State Warriors (63-14). 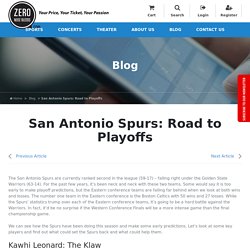 For the past few years, it’s been neck and neck with these two teams. Some would say it is too early to make playoff predictions, but the Eastern conference teams are falling far behind when we look at both wins and losses. NBA Playoffs: Spurs Starting Off Strong. The San Antonio Spurs are off to a strong start this NBA playoff season with two double-digit victories over the Grizzlies. 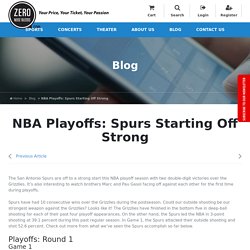 It’s also interesting to watch brothers Marc and Pau Gasol facing off against each other for the first time during playoffs. Spurs Playoff Kickoff Party. Don’t miss your chance to meet the famous Spurs Coyote! 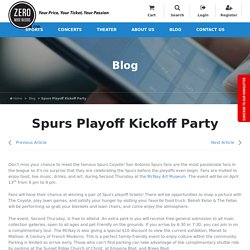 San Antonio Spurs fans are the most passionate fans in the league so it’s no surprise that they are celebrating the Spurs before the playoffs even begin. Fans are invited to enjoy food, live music, drinks, and art, during Second Thursday at the McNay Art Museum. The event will be on April 13th from 6 pm to 9 pm. Spurs Fall to Trail Blazers and Prepare for Playoffs. The NBA Western Conference playoffs picture has essentially been locked. The eight teams have already been decided on since Sunday. Besides the Utah Jazz and Los Angeles Clippers playing for home-court advantage, the final games left for the other western teams are basically just scrimmages.

The Spurs game last night against the Portland Trail Blazers didn’t really have any purpose since they have already clinched their playoff spots. Coach Pop said there’s no time for resting anymore. Regular Season Finale and Playoff Schedule. The NBA playoffs are upon us! The first round schedule was released just yesterday. While the Western Conference has been set, other matchups were still being finalized throughout the week.

The San Antonio Spurs played their regular season finale last night and had a disappointing loss in Utah. Even though last night’s game against the Jazz meant very little for the Spurs, it meant a lot for the Jazz. Planning A Road Trip? Check Out These Car-Care Prep Tips. Spring Break is right around the corner! It is the perfect time to take a family road trip. Before you set out on your trek across America, you need to make sure that you have crossed your T’s and dotted your I’s. Not sure what are we talking about? Top Super Bowl commercial 2017. Scandals in NCAA History. The NCAA Men’s College system has been the subject of great surprises, especially the famous March Madness tournament that is soon to be among us.

However, these surprises can be categorized in many different ways; rather than be in record-breaking games or controversy. Here are some of the biggest scandals in NCAA history. In The early 2000’s, Baylor University was investigated for numerous NCAA violations that began after the scandal of the 2003 murder of player Patrick Dennehy. Patrick Dennehy was a junior basketball player for The Baylor University Bears. In the summer of 2003, Patrick Dennehy and teammate Carlton Dotson expressed concerns about their safety and purchased firearms as a result of this. It was then discovered that the head coach, Dave Bliss, had illegally paid the tuition of two players, Patrick Dennehy and Corey Herring. Dave Bliss later tried to cover this fact by alleging that player Patrick Dennehy paid his tuition by selling drugs, which was untrue. Top 5 Defensive Players in NFL History.