Calcite microcrystals in the pineal gland of the human brain: first... UK Scientists: Aliens May Have Sent Space Seeds To Create Life On Earth. New trick found for how cells stay organized. Organization is key to an efficient workplace, and cells are no exception to this rule. 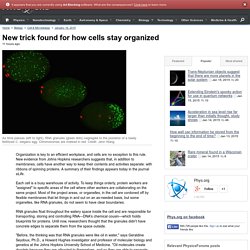 Not everyone sees health decline from obesity, but why is that? The news isn’t shy in reporting the effects of being obese, high blood pressure, and diabetes (just to name a few). 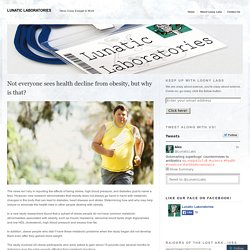 However, new research demonstrates that obesity does not always go hand in hand with metabolic changes in the body that can lead to diabetes, heart disease and stroke. Determining how and why may help reduce or eliminate the health risks in other people dealing with obesity. In a new study researchers found that a subset of obese people do not have common metabolic abnormalities associated with obesity, such as insulin resistance, abnormal blood lipids (high triglycerides and low HDL cholesterol), high blood pressure and excess liver fat. In addition, obese people who didn’t have these metabolic problems when the study began did not develop them even after they gained more weight. The study involved 20 obese participants who were asked to gain about 15 pounds over several months to determine how the extra pounds affected their metabolic functions.

'Evolution will punish you if you're selfish and mean' Two Michigan State University evolutionary biologists offer new evidence that evolution doesn't favor the selfish, disproving a theory popularized in 2012. 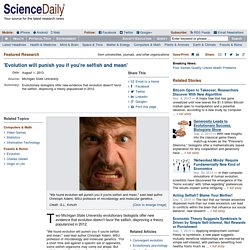 "We found evolution will punish you if you're selfish and mean," said lead author Christoph Adami, MSU professor of microbiology and molecular genetics. "For a short time and against a specific set of opponents, some selfish organisms may come out ahead. But selfishness isn't evolutionarily sustainable. " The paper appears in the current issue of Nature Communications and focuses on game theory, which is used in biology, economics, political science and other disciplines.

Researchers find a relationship between sleep cycle, cancer incidence. (Medical Xpress)—People who work around the clock could actually be setting themselves back, according to Virginia Tech biologists. 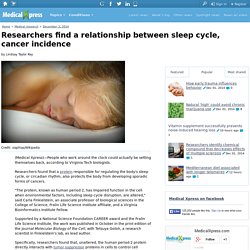 Researchers found that a protein responsible for regulating the body's sleep cycle, or circadian rhythm, also protects the body from developing sporadic forms of cancers. "The protein, known as human period 2, has impaired function in the cell when environmental factors, including sleep cycle disruption, are altered," said Carla Finkielstein, an associate professor of biological sciences in the College of Science, Fralin Life Science Institute affiliate, and a Virginia Bioinformatics Institute Fellow. 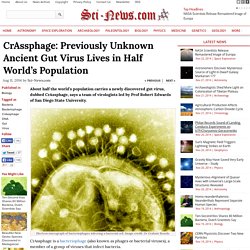 Electron micrograph of bacteriophages infecting a bacterial cell. Image credit: Dr Graham Beards. CrAssphage is a bacteriophage (also known as phages or bacterial viruses), a member of a group of viruses that infect bacteria. Prof Edwards and his colleagues named this virus after the Cross-Assembly (CrAss) software program used to discover it. That gut feeling. If aliens were to swoop in from outer space and squeeze a human down to see what we're made of, they would come to the conclusion that cell for cell, we're mostly bacteria. 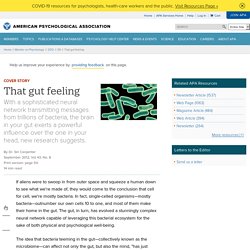 In fact, single-celled organisms—mostly bacteria—outnumber our own cells 10 to one, and most of them make their home in the gut. The gut, in turn, has evolved a stunningly complex neural network capable of leveraging this bacterial ecosystem for the sake of both physical and psychological well-being. The idea that bacteria teeming in the gut—collectively known as the microbiome—can affect not only the gut, but also the mind, "has just catapulted onto the scene," says neuroimmunologist John Bienenstock, MD, of McMaster University in Hamilton, Ontario. 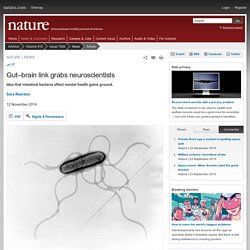 Bergman/Corbis Feeding mice the bacterium Bacteroides fragilis can reverse autism-like symptoms. Companies selling ‘probiotic’ foods have long claimed that cultivating the right gut bacteria can benefit mental well-being, but neuroscientists have generally been sceptical. Now there is hard evidence linking conditions such as autism and depression to the gut’s microbial residents, known as the microbiome. Cancer's 'Frankenstein' DNA mystery solved › News in Science (ABC Science) News in Science Tuesday, 11 November 2014 Dani CooperABC Giant chromosome The creation of a 'Frankenstein' chromosome that steals the DNA it needs to grow and survive has been detailed for the first time in research led by Australian scientists. 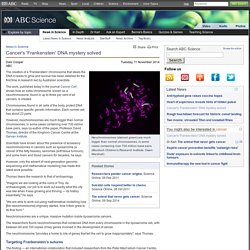 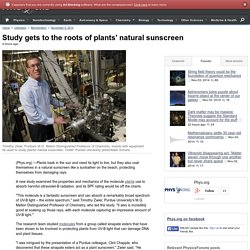 A new study examined the properties and mechanics of the molecule plants use to absorb harmful ultraviolet-B radiation, and its SPF rating would be off the charts. "This molecule is a fantastic sunscreen and can absorb a remarkably broad spectrum of UV-B light – the entire spectrum," said Timothy Zwier, Purdue University's M.G. Mellon Distinguished Professor of Chemistry, who led the study. A possible alternative to antibiotics. Scientists from the University of Bern have developed a novel substance for the treatment of severe bacterial infections without antibiotics, which would prevent the development of antibiotic resistance. 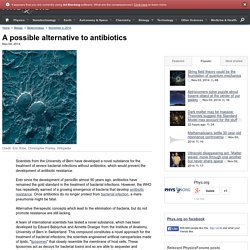 Ever since the development of penicillin almost 90 years ago, antibiotics have remained the gold standard in the treatment of bacterial infections. However, the WHO has repeatedly warned of a growing emergence of bacteria that develop antibiotic resistance. Once antibiotics do no longer protect from bacterial infection, a mere pneumonia might be fatal. Alternative therapeutic concepts which lead to the elimination of bacteria, but do not promote resistance are still lacking.

How you (and other animals) breathe, in one beautiful GIF. Who knew breathing could be so beautiful? This outstanding animated GIF, created by designer Eleanor Lutz for her science illustration blog Tabletop Whale, shows three different ways that animals exchange gases with their environments, with fresh, oxygen-rich air shown as yellow, and deoxygenated air shown as red.

(Eleanor Lutz) You might be pretty familiar with the type of breathing done by humans (and other mammals). By flexing and unflexing the diaphragm, we draw air into our lungs, where it inflates tiny air sacs called alveoli and allows oxygen to pass into the blood. At the same time, excess carbon dioxide passes in the opposite direction, and gets exhaled when we breathe out. Birds are a bit different. A chimp-pig hybrid origin for humans? (Phys.org) —These days, getting a Ph.D. is probably the last thing you want to do if you are out to revolutionize the world. If, however, what you propose is an idea, rather than a technology, it can still be a valuable asset to have. Dr. Eugene McCarthy is a Ph.D. geneticist who has made a career out of studying hybridization in animals. He now curates a biological information website called Macroevolution.net where he has amassed an impressive body of evidence suggesting that human origins can be best explained by hybridization between pigs and chimpanzees.

Researchers find ferns communicate with one another to decide gender. Sex? It all started 385 million years ago (w/ Video) It may not have been love as we know it, but around 385 million years ago, our very distant ancestors—armoured fish called placoderms—developed the art of intercourse. So suggest a team of evolutionary scientists, who point to the fossil of a placoderm species blessed with the name of Microbrachius dicki. Measuring about eight centimetres (four inches) in length, M. dicki lived in habitats in modern-day Scotland—where the first specimen was found in 1888—and in Estonia and China. Placoderms have previously been found to be the most primitive jawed animal—the earliest known vertebrate forerunner of humans.

Where Do Trees Come From? Cancer leaves a common fingerprint on DNA. How plants grow and develop. How does a complete plant with stems, leafs and flowers develop from a tiny clump of seemingly identical cells? For a very long time, the mechanism of tissue formation in plants remained unclear. The biochemists from Wageningen University also would not have come up with the answer if it wasn't for their model building colleagues that simulated plant development with their mathematical toolbox.

They describe their joint discovery of the mechanism in the scientific journal Science of August 8. Unlike animals, plants are not mobile and are anchored into the soil. Functional GI issues and autism: not just an accumulation of case reports? Ancient minerals: Which gave rise to life? Does evolutionary theory need a rethink? Kids' Sugar Cravings Might Be Biological. Scientists create new 'designer proteins' in fight against Alzheimer's and cancer.

Chemists at the University of Leicester have reported a breakthrough in techniques to develop new drugs in the fight against diseases such as cancer and Alzheimer's. The team has developed an innovative process allowing them to generate a particular type of synthetic amino acid – and a particular type of designer protein - that has not been done before. Cells put off protein production during times of stress. Living cells are like miniature factories, responsible for the production of more than 25,000 different proteins with very specific 3-D shapes. Team discovers neurochemical imbalance in schizophrenia. Using human induced pluripotent stem cells (hiPSCs), researchers at Skaggs School of Pharmacy and Pharmaceutical Sciences at University of California, San Diego have discovered that neurons from patients with schizophrenia secrete higher amounts of three neurotransmitters broadly implicated in a range of psychiatric disorders.

The findings, reported online Sept. 11 in Stem Cell Reports, represent an important step toward understanding the chemical basis for schizophrenia, a chronic, severe and disabling brain disorder that affects an estimated one in 100 persons at some point in their lives. Wiping the slate clean: Erasing cellular memory and resetting human stem cells. Babraham Institute scientists, in collaboration with colleagues at the Cambridge Stem Cell Institute and the European Bioinformatics Institute, have published findings today in the journal Cell giving hope that researchers will be able to generate base-state, naïve human stem cells for future medical applications.

The study demonstrates that human stem cells can be reverted back to a base state, losing characteristics that mark them as belonging to a specific cell lineage and instead regaining the identify of a non-specialised cells with unrestricted potential (pluripotency) to develop into any cell type. The Origami Brain and a new marker for Schizophrenia. Anyone who has seen pictures or models of the human brain (like the one above) is aware that the outside layer, or cortex, of the brain is folded in an intricate pattern of “hills”, called gyri, and “valleys”, called sulci which give the brain it’s distinctive look.

It turns out that the patterns of cortical folding are largely consistent across healthy humans, broadly speaking. However, disturbances in cortical folding patterns suggest deeper disturbances in brain structure and function. New insights into 'switchable water' have implications for water purification and desalination. Cancer leaves a common fingerprint on DNA. How plants grow and develop. Deep within spinach leaves, vibrations enhance efficiency of photosynthesis. Biophysics researchers at the University of Michigan have used short pulses of light to peer into the mechanics of photosynthesis and illuminate the role that molecule vibrations play in the energy conversion process that powers life on our planet.

Study: Your brain sees things you don't. Newly discovered protist suggests evolutionary answers, questions. How argonaute proteins intervene in the gene regulation process. Cells show signs of faster aging after depression. Researchers get a detailed look at a DNA repair protein in action. Scientists Create an Organism with a New Genetic Code. Light as medicine? Researchers reveal how specific wavelengths of light can heal. Single gene mutation linked to diverse neurological disorders. Can Animals Sense Each Other’s Wants and Hopes? Football-shaped particles bolster the body's defense against cancer. Neurons Fire Backward in Sleep. Gut bugs may hold key to weight control, mouse study suggests. Unravelling the secrets of maleness. Space around others perceived just as our own. Slowing the ageing process—it's in your genes. Convergent evolution seen in hundreds of genes. Membranes contain beautiful patterns—but their function is a mystery.