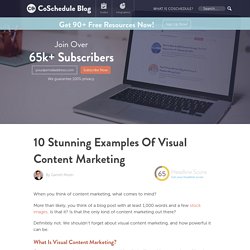 More than likely, you think of a blog post with at least 1,000 words and a few stock images. Is that it? Is that the only kind of content marketing out there? Definitely not. We shouldn’t forget about visual content marketing, and how powerful it can be. What Is Visual Content Marketing? Seven Ways To Identify And Engage Brand Advocates. The 10 Biggest Social Networks Worldwide. Facebook is the world’s biggest social network, with 1.35 billion users as of December 2014. 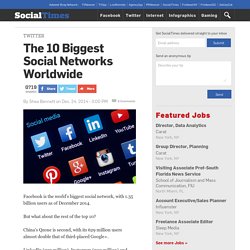 But what about the rest of the top 10? China’s Qzone is second, with its 629 million users almost double that of third-placed Google+. LinkedIn (332 million), Instagram (300 million) and Twitter (284 million) are next, followed by Tumblr, Sina Weibo, Vkontakte and Snapchat. Which Social Media Channels Should You Use to Promote Your Business? Social networks are considered to be a powerful arena for online marketing. 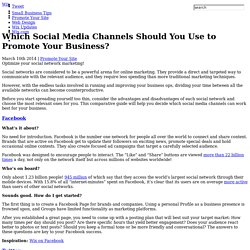 They provide a direct and targeted way to communicate with the relevant audience, and they require less spending than more traditional marketing techniques. However, with the endless tasks involved in running and improving your business ops, dividing your time between all the available networks can become counterproductive. Before you start spreading yourself too thin, consider the advantages and disadvantages of each social network and choose the most relevant ones for you. Facebook Says These Are the 15 Best Brands on Facebook. On April 29, Facebook announced the winners of the third annual Facebook Studio Awards -- Facebook's way of recognizing brands and agencies from around the world creating great campaigns. 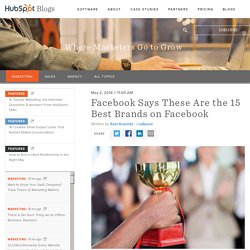 With 1.28 billion monthly users and access to a trove of consumer data, companies of all shapes and sizes have integrated the social media platform with their marketing in an attempt to attract and engage today’s digital consumers. The winners of this year's Facebook Studio Awards were selected based on three criteria: 1) Craft & Execution. 25 Social Media Channels You're Probably Not Using Now. Chances are your small business has used social media in one way or another. 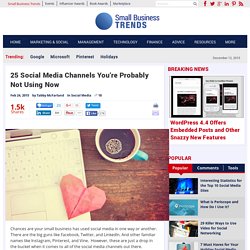 There are the big guns like Facebook, Twitter, and LinkedIn. The App Revolution. Reporter: Charles WooleyProducer: Danny Keens A decade ago, we would never have thought it possible. 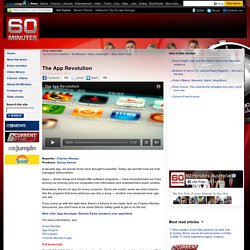 Today, we wonder how we ever managed without them. Apps — those cheap and simple little software programs — have revolutionised our lives turning our phones and our computers into information and entertainment super centres. Most branded apps are a flop says Deloitte. But why? A new report from Deloitte has confirmed what many app developers know already: the majority of mobile apps commissioned by brands are failing to take smartphones by storm. 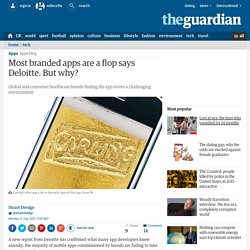 The report was based on analysis of apps published on iPhone, Android and BlackBerry by big healthcare and consumer brands. Deloitte says that less than 1% of these apps have been downloaded more than one million times, and that only 20% had been downloaded enough to be considered for its survey. Or, to put that latter stat another way: 80% of branded apps analysed by Deloitte had been downloaded less than 1,000 times. This, despite the fact that every month, the three stores in the study generate 1.6bn downloads – 1bn for Apple's App Store, 500m for Google's Android Market and 90m for Research In Motion's BlackBerry App World. Brands Need to Understand and Embrace the Owned Media of Apps. In the United States today there are more than 327 million mobile devices being used on a daily basis. 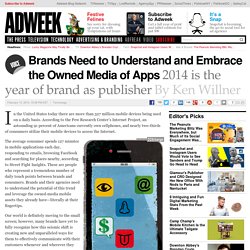 According to the Pew Research Center’s Internet Project, an astounding 91 percent of Americans currently own cellphones, and nearly two-thirds of consumers utilize their mobile devices to access the Internet. The average consumer spends 127 minutes in mobile applications each day, responding to emails, browsing Facebook and searching for places nearby, according to Street Fight Insights. These are people who represent a tremendous number of daily touch points between brands and consumers. Brands and their agencies need to understand the potential of this trend and leverage the owned-media mobile assets they already have—literally at their fingertips.

Part of the disconnect is that many corporate mobile apps are managed by IT teams as “utility” apps, which require forward planning, cross-team coordination and additional effort to get them updated on a continual basis. 3 Secrets to Branded Mobile App Engagement. People have a lot of apps on their smartphones and they spend a lot of time using them. 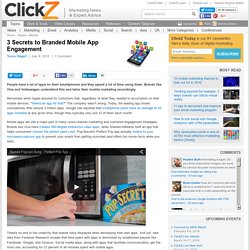 Brands like Visa and Volkswagen understand this and tailor their mobile marketing accordingly. Remember when Apple assured its customers that, regardless of what they needed to accomplish on their mobile devices, "there's an app for that? " Apple (Australia) - Apple Press Info - Apple’s App Store Marks Historic 50 Billionth Download. Branded Apps vs Brand Advertising. How being useful gets consumers’ attention too. Just like Fleetwood Mac, the Internet wants to be with you everywhere. 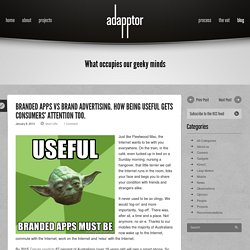 On the train, in the café, even tucked up in bed on a Sunday morning, nursing a hangover, that little terrier we call the Internet runs in the room, licks your face and begs you to share your condition with friends and strangers alike. Instructables - DIY How To Make Instructions. The 10 best big company blogs in the world. 9 things brands should consider before launching a blog. 5 tips for writing a blog that people actually want to read. Design Psychology: How To Combine Neuroscience and Design To Engage Your Audience. If you look back at the websites of some of the biggest companies over the last decade you’ll be amazed at how they have changed. In the early days of the web, people crammed as much information as possible on to the screen. Now, websites are highly researched, thoroughly-planned pieces of design, engineered to grab your attention at just the right point, at just the right time.

The Top 10 Tools for Tracking Your Web Metrics. 5 brilliant microsites and why they're so effective. A microsite has the power to highlight a product, launch a promotion, or augment a marketing campaign in a way that full websites or more traditional marketing cannot. 6 Turnkey Tools for Content Distribution.