I can still use items I've picked up, but not in battle. I'm going to allow myself to buy full restores for the Elite 4, though, otherwise I'd cry. So that's it. And Hedderf will get updated when I have spare time. So thank you again everyone. Oh gosh. Page 41 <--- Huge flash thingymabob finale Epilogue <--- The End sQUEAKYfOAMpEANUT amazing Guest ComicSeiga's really fantastic fan artChrisZ's brilliant awesome fan artBeautiful drawing of Connery by Shelly ;; Important blog with important things. 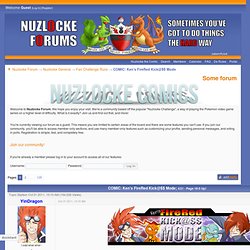 I've been wanting to do this comic for a little over a year now, and I finally started it. This comic is based on my own personal Nuzlocke run of Pokemon FireRed, starring an old character of mine from a (non-existent) Pokemon fanfic. While this story is based on the plot of the FireRed/LeafGreen games, I've inserted a few elements from Ken's original story to change things up. You can also view my comic at my deviantArt page. Hope you guys enjoy!