With summers steadily growing hotter, winters growing colder, and the average home and building increasing in size, there has never before been such a high demand for heating and cooling systems. 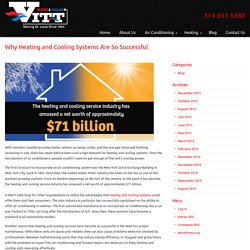 Since the introduction of air conditioners, people couldn’t seem to get enough of the unit’s cooling power. The first structure to incorporate an air conditioning system was the New York Stock Exchange Building in New York City, back in 1903. Since then, the United States HVAC industry has been on the rise as one of the quickest growing markets. From its humble beginnings at the turn of the century, to the giant it has become, the heating and cooling service industry has amassed a net worth of approximately $71 billion. It didn’t take long for other organizations to notice the advantages that heating and cooling systems could offer them and their consumers.

Another reason that heating and cooling services have become so successful is the need for proper maintenance. NYC's plumbing and sewer systems. New York City's sewer pipes are flush with problems thanks to flushable wipes. 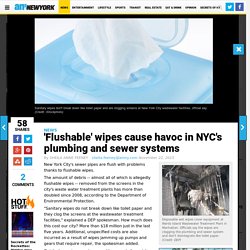 The amount of debris -- almost all of which is allegedly flushable wipes -- removed from the screens in the city's waste water treatment plants has more than doubled since 2008, according to the Department of Environmental Protection. "Sanitary wipes do not break down like toilet paper and they clog the screens at the wastewater treatment facilities," explained a DEP spokesman. How much does this cost our city? More than $18 million just in the last five years. Additional, unspecified costs are also incurred as a result of wipes jamming up pumps and gears that require repair, the spokesman added. Main Reasons Why Your Water Main Leaks. Water main leaks can cause an abundance of problems for your home or business, not the least of them being damage caused by flooding and extremely high utility bills. 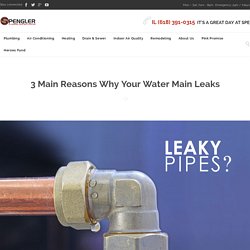 Of course, there are several reasons why the water main may become damaged and start to leak, but here are the three most common reasons for it: 1. Old Pipes Old pipes are one of the most common culprits when it comes to water main leaks. When to Replace the Furnace Filter. No furnace system would be able to function as well if it wasn’t for the furnace filter. 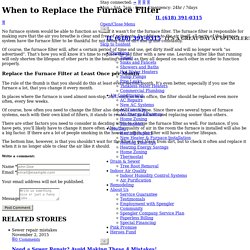 The furnace filter is responsible for making sure that the air you breathe is clear and free of pollutants. In addition to the air itself, all parts of the furnace system have the furnace filter to be thankful for not being full of dirt and grime constantly. Of course, the furnace filter will, after a certain period of time and use, get dirty itself and will no longer work “as advertised”. That’s how you will know it’s time to replace the old filter with a new one. Leaving a filter like that running will only shorten the lifespan of other parts in the heating system, as they all depend on each other in order to function properly. Replace the Furnace Filter at Least Once per Month. 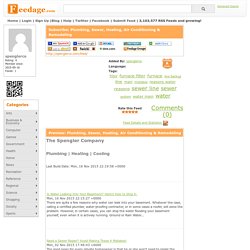 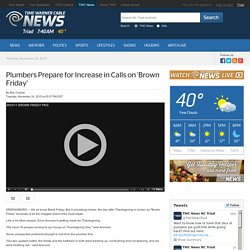 But in plumbing circles, the day after Thanksgiving is known as "Brown Friday” because of all the clogged drains they must repair. Like a lot other people, Erica Aronson's getting ready for Thanksgiving. "We have 16 people coming to our house on Thanksgiving Day," said Aronson. Some unexpected problems brought a visit from the plumber first. Plumbers Prep For Their Busiest Day Of The Year. Best Plumbing company in St. Louis. American Standard named Showroom Plumbing Vendor of the Year by Ferguson. Accepting the Showroom Plumbing Vendor of the Year Award is Bert Magladry, manager of U.S. trade sales for LIXIL Water Technology Americas, American Standard (third from left). 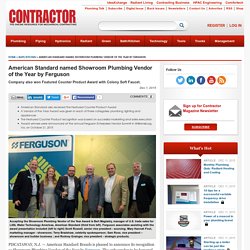 The only vendor to be honored with two awards this year, American Standard also received the Featured Counter Product Award for its Colony Soft centerset bathroom faucet promotion. Award winners were announced at the annual Ferguson Enterprises Vendor Summit in Williamsburg, Va. on October 21, 2015. Plumber Don celebrates career high. DON Evans owes his 50-year career as a plumber to a small ad in the newspaper - and his mum. 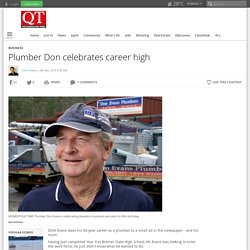 Having just completed Year 9 at Bremer State High School, Mr Evans was looking to enter the work force; he just didn't know what he wanted to do. Unable to decide, his mother stepped in and made the choice for him. "My mum noticed an ad in the Queensland Times, which stated a plumbing firm called J. R. Wyllie and Sons was looking to hire apprentice plumbers and said I should do that," Mr Evans recalled. Legacy Family Serves 231 Years at Mansfield Plumbing. Four generations of Edmondson men have had careers at Mansfield Plumbing since the company started in 1929. 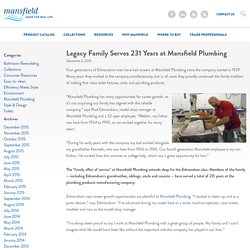 Many years they worked at the company simultaneously, but in all cases they proudly continued the family tradition of making first-class toilet fixtures, sinks and plumbing products. “Mansfield Plumbing has many opportunities for career growth, so it’s not surprising our family has aligned with this reliable company,” says Rod Edmondson, model shop manager at Mansfield Plumbing and a 32-year employee. “Weldon, my father, was here from 1954 to 1995, so we worked together for many years. “During his early years with the company my dad worked alongside my grandfather Kenneth, who was here from 1956 to 1966. Our fourth generation Mansfield employee is my son Kolton.