Subconscious Mind power secret #1. Peaceful Warrior - 1/2 - ITA. Dan Millman: Living as a Peaceful Warrior (excerpt) - Thinking Allowed w/ Jeffrey Mishlove. Www.esmhome.org/library/TheMasterKeySystem.pdf. How to Lucid Dream And Manifest Anything You Want, Fast! Mind Hacks. This Can Rock Your Mind. How To Build a “Lifestyle Business” with 30M Visitors Per Month. Wade Roush12/16/11 In Silicon Valley, there is no more pejorative term than “lifestyle business.” 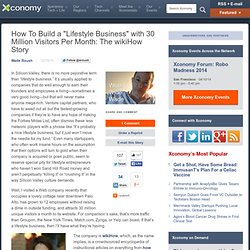 It’s usually applied to companies that do well enough to earn their founders and employees a living—sometimes a very good living—but that will never make anyone mega-rich. Venture capital partners, who have to weed out all but the fastest-growing companies if they’re to have any hope of making the Forbes Midas List, often dismiss these less meteoric players with a phrase like “It’s probably a nice lifestyle business, but it just won’t move the needle for my fund.”

Even many startuppers, who often work insane hours on the assumption that their options will turn to gold when their company is acquired or goes public, seem to reserve special pity for lifestyle entrepreneurs who haven’t won Sand Hill Road money and aren’t perpetually “killing it” or “crushing it” in the way Silicon Valley culture demands. Rain Barrels, Chicken Coops, and Solar Panels. To make all of these Instructables, download this collection of How To’s as an ebook. 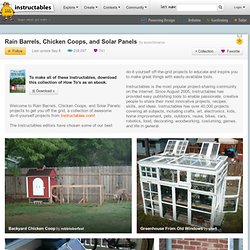 Download » Welcome to Rain Barrels, Chicken Coops, and Solar Panels: projects to get you off the grid, a collection of awesome do-it-yourself projects from Instructables.com! The Instructables editors have chosen some of our best do-it-yourself off-the-grid projects to educate and inspire you to make great things with easily-available tools. Instructables is the most popular project-sharing community on the Internet. Since August 2005, Instructables has provided easy publishing tools to enable passionate, creative people to share their most innovative projects, recipes, skills, and ideas. Become Superhuman: Maximize Your Potential and Fulfill Your Destiny. As we advance in the spiritual life and in the practice of systematic self-examination we are often surprised by the discovery of vast unknown tracts of the inner life of the soul. 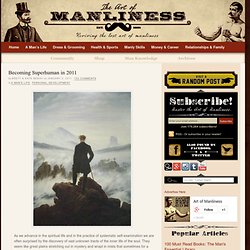 They seem like great plains stretching out in mystery and wrapt in mists that sometimes for a moment lift, or sweep off and leave one looking for one brief instant upon great reaches of one’s own life, unknown, unmeasured, unexplored. Men stand at such moments breathless in wonder and in awe gazing upon these great tracts upon which they have never looked before, with kindling eyes and beating hearts; and while they look the mists steal back till all is lost to sight once more and they are left wondering if what they saw was reality, or the creation of their fancy.

Have you ever experienced such a moment? Suddenly you caught a glimpse of your infinite possibilities-time seemed to stop, your heart skipped a beat, your breath caught in your throat…perhaps you had such a moment when reading the above passage! Remembrance of things future: Long-term memory sets the stage for visual perception. (Medical Xpress) -- Rather than being a passive state, perception is an active process fueled by predictions and expectations about our environment. 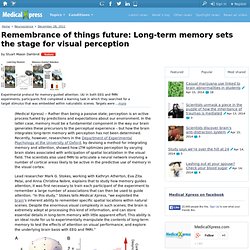 In the latter case, memory must be a fundamental component in the way our brain generates these precursors to the perceptual experience – but how the brain integrates long-term memory with perception has not been determined. Recently, however, researchers in the Department of Experimental Psychology at the University of Oxford, by devising a method for integrating memory and attention, showed how LTM optimizes perception by varying brain states associated with anticipation of spatial localization in the visual field. The scientists also used fMRI to articulate a neural network involving a number of cortical areas likely to be active in the predictive use of memory in the visual cortex. Lead researcher Mark G. 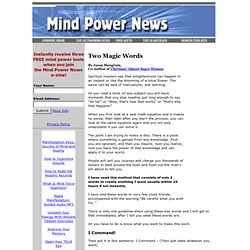 Almost Super Human Spiritual masters say that enlightenment can happen in an instant or like the blooming of a lotus flower. The same can be said of realizations, and learning. As you read a book on any subject you will have moments that you stop reading just long enough to say "Ah ha! " When you first look at a new math equation and it makes no sense, then later after you learn the process, you can look at the same equation again and you not only understand it you can solve it. The point I am trying to make is this: There is a point where something is gained from any knowledge. People will sell you courses and charge you thousands of dollars to beat around the bush and flush out the truth I am about to tell you. I have used this method that consists of only 2 words to create anything I want usually within 24 hours if not instantly.