Blockchain and its Possiblities in Banking and Finance. Blockchain, as most of the people know, is the driving technology behind cryptocurrencies or the more popular Bitcoin. 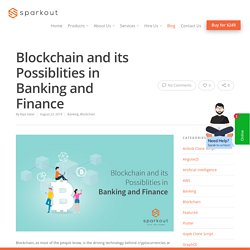 But, as a technology, Blockchain is much more than that. It is an idea into execution that can shape the socio-economic structure of our future. And it is technologically powerful enough to change the world of banking and finance, as we know it today. Even though it is a long road until we see a complete shift in the current paradigm, we can see things and the process of banking moving towards it. But how will the current construct evolve into something more robust and a system that has actually moved towards digital structure? In its core sense, blockchain is a database about transaction details. The Potential Impact on Financial system Reduction in Financial Crimes:

How secure is a transaction on Blockchain? Is Blockchain secure? 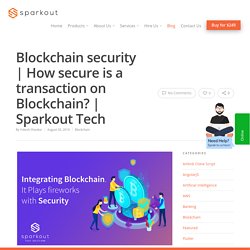 Technically, a blockchain is a record list growing eventually and are linked using certain methodology. The idea of using blockchain is to allow people specifically those with trust issues to share valuable and important data in a way where it is secured and cannot be tampered. The data is kept authentic and safe as the storage has an elite math and software innovation with extreme rules which cannot be manipulated by any attackers. The system security is the most appropriate design which has very rare chances of failure and can only be hindered by some skilful rules or smart math only taken up by skillful thieves.

Increase your bookings by analyzing guest reviews with Core ML Sentimental Analysis. 1st Sentiment Dive: Parts of Speech Yes, it sounds elementary, but it is one of the deciding factors to arrive at the final sentimental weight. 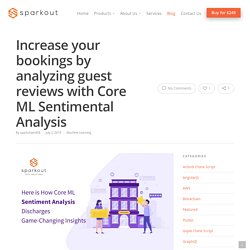 Parts of Speech tagging again divides the sentence and identifies nouns, verbs, adjectives, and adverbs to identify emotion value attached to the sentences. It helps the algorithm by narrowing the search to determine the total weight of the comments efficiently. Review: Amazing place, but the lights are not bright enough. ‘Amazing’ is an adjective that describes the noun ‘place’ adding positive points, meanwhile, ‘not bright’ is dotting the negatives. Sprint Planning - How Sparkout Tech engages a project? Sprint planning is one of the scrum management frameworks that speed up the workflow and amplifies the efficiency. 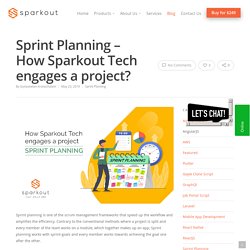 Contrary to the conventional methods where a project is split and every member of the team works on a module, which together makes up an app; Sprint planning works with sprint-goals and every member works towards achieving the goal one after the other. Parties Involved to Make Sprint Plan The product owner briefs the sprint objective and the backlogs to be cleared to achieve the goal. How Applications Work in Foldable SmartPhones. While the air of uncertainty is still shrouding the foldable mobile phones and their longevity, it is not warding techies and tech enthusiasts from exploring the niche. 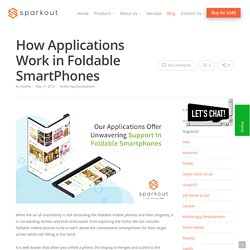 We too consider foldable mobile phones to be a notch above the conventional smartphones for their larger screen while still fitting in the hand. It is well known that when you unfold a phone, the display is merged and scaled to the corners of the screen, here are some more facts which you might not have known already. What is GraphQL? - Facebook Open Source API. GraphQL is an open-source API spec that provides an intuitive and flexible syntax which is a more efficient and powerful alternative to REST. 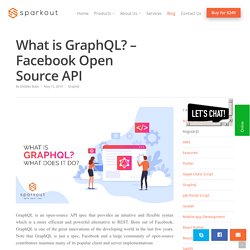 Born out of Facebook, GraphQL is one of the great innovations of the developing world in the last few years. Note that GraphQL is just a spec, Facebook and a large community of open-source contributors maintain many of its popular client and server implementations The ecosystem around the tech is growing horizontally by offering multiple programming languages, and vertically with libraries like Apollo and Relay. A GraphQL operation can either be a query (read), mutation (write), or subscription (continuous read). Challenging Factor: 5 Advanced Features in RentalSlew - Vacation Rental Script. RentalSlew is a highly customizable Airbnb Clone Script developed by Sparkout Tech Solutions to equip and empower business ventures with a powerful property rental solution. 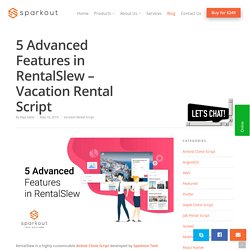 The business is indeed thriving; if you are looking to start one, waste no time for every day passed is a day wasted. Dotted below are five advanced features of RentalSlew. QR Codes in Laravel - A Complete Explanation with Steps. QR code is an arrangement of black and white squares – no, we are not talking about chess boards – conventionally used for storing URLs which requires scanning from mobile phone camera to read. 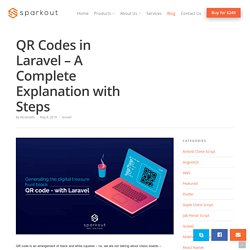 Dotted below are the ways you can use to generate different types of QR codes in Laravel. There aren’t many packages for generating QR codes in Laravel, but the ones there are, are really good. simple-qrcode is a Laravel package which is actually a wrapper around the BaconQrCode package for PHP. Install the package: Get the simple-qrcode composer package into your Laravel project by running this in your project directory: composer require simplesoftwareio/simple-qrcode NOTE: If your Laravel version is 5.4 or less Add SimpleSoftwareIO\QrCode\QrCodeServiceProvider::class to the providers array in your config/app.php Add the alias 'QrCode' => SimpleSoftwareIO\QrCode\Facades\QrCode::class to the aliases array in config/app.php Reload composer auto-load cache: composer dumpautoload Basic usage: Example: Syntax:

React Native vs Flutter - Which One is Best for App Development? Flutter vs React Native: The buzz among the developers especially when a cross-platform application development equipment lights the sky for the first time makes it quite clear on the domain’s popularity and demand. 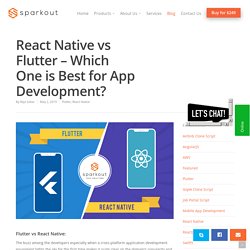 Although there are impressive numbers of cross platforms available on the market, Flutter and React Native comes out on top with their supportive community and immense popularity. Moreover, both these platforms are introduced and maintained by the giants of the technological world. What is Flutter? Released in 2017, Flutter is an open source mobile application development framework introduced by Google. Amazon Web Services Opens the Door for Managed Blockchain Service. The managed blockchain service launched by the e-commerce mammoth, Amazon is finally available for the wide use of enterprises. 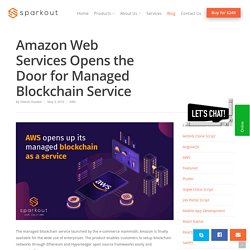 The product enables customers to setup blockchain networks through Ethereum and Hyperledger open source frameworks easily and economically. AMB is already implemented and used by AT&T and Nestle according to an announcement made by Amazon. Amazon Web Services initially announced the AMB in November 2018 and was in preview until a few days ago. What's New in Swift 5? Feature upgrade on iOS App Development. Released in March 2019,Swift 5 is the latest upgrade for the predominant language for Apple.

It is also source-code compatible with Swift 4, Swift 4.1 and Swift 4.2. To assist the earlier releases of Swift to move to Swift 5, Apple’s Xcode 10.2 incorporates a code migrator which automatically handles most of the needed source code changes. Angular JS vs React JS Comparsion. Which One is Better? The first two contenders when choosing a JavaScript framework for front end development dot React JS and Angular JS. It can be easy to point at the frameworks if asked for the best, but it is tricky to actually choose the one for we have to take into account their pros and cons. And therefore before choosing the one, it is highly recommended to compare and scrutinize heavily before arriving at the conclusion.

Angular JS. Top 5 Technologies Trending in Mobile App Development. Mobile applications have far surpassed the conventional desktop software for they are always in the arms’ reach when needed. Because of their surging prominence among the general public, the baby steps of development has become faster strides and we are sure, although the distance to its zenith is humongous, it is closing faster than ever. Here are the top five technologies leading the mobile application development. Kotlin: Kotlin is a cross-platform language and has been climbing the ladder at an exponential pace in terms of usage ever since Google announced its support on Android. Handyman Service Scheduling Software. The world’s getting smaller with every passing day, but life is not simple and easy, not anymore.

People are hustling 24X7 for their career and to achieve financial freedom. There is not really any time to go to a hotel and have supper, we just to rely on food delivery agencies. Benefits of Job portal Similar to Naukri - HR app Clone Script. Identifying the right company to build your career can take tiresome to new extents. Further, it takes a lot of time just to look for all the companies that have a position for you. HR app is developed with the sole aim to make it easy for you to look for the right positions in companies. It takes single search to glide through millions of jobs from thousands of companies to look for your opening. Benifits of Yacht Management Software for your Boat rental Business with Rentalslew. Yacht Rental Business, something that is rarely heard.

But makes it no less lucrative when compared to other businesses. Start your yacht rental business with Sparkout Tech tested business suite, RentalSlew. 3 Reasons why you need Chat Masking in your Airbnb clone application. Expand your Borders with Eatzilla's Multilingual Support. Online food ordering application is a mobile/desktop platform from which the user can choose delicious cuisines offered in various restaurants (partnered with the application company) and order it to be delivered to his doorstep. He/She can browse through a variety of dishes, compare their prices, and make a decision that besides appeasing his taste bud, helps derive maximum value for his money and time. Monetise the advent of Smartphone: The initial phase of smartphone usage along with mobile data was chiefly occupied by the younger generation of every family.

They, to a certain period of time, played the role of the chief financial officer in their home on matters dealing with online purchases, largely owing to their modern education in English. But now, as the smartphone market evolved and data became cheaper, the penetration of mobile phone accompanied by internet is growing swiftly in every middle-class home. Build trust an rapport: Here is why you need iCAL feature in your Vacation Rental Business. Payment Process For Vacation Rental Business - Rentalslew.

How to Improve a Business Website with Live Chat? - Sparkout Tech. Benefits of Airbnb Clone Script to Build Your Own Vacation Rental Website. Benefits of UberEats Clone Script. Barber Scheduling, Salon Software and Spa Booking Software - Macho. The much-awaited next generation barber/cosmetologist booking system for Salons is here! A big relief for all those who hate to wait for their hairdresser as they can plan and schedule to use their time efficiently. All thanks to our Android, IOS, and Backend developers for converting this vision into a top-notch Uber clone for Salons.