How-to-tell-an-employee-to-dress-more-professionally. How-to-write-a-great-business-plan-sales-and-marketing. Job Openings Are Now at a 14-Year High. Signs of Alien Life Will Be Found by 2025, NASA's Chief Scientist Predicts. Humanity is on the verge of discovering alien life, high-ranking NASA scientists say. 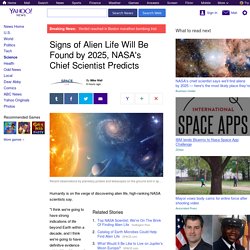 "I think we're going to have strong indications of life beyond Earth within a decade, and I think we're going to have definitive evidence within 20 to 30 years," NASA chief scientist Ellen Stofan said Tuesday (April 7) during a panel discussion that focused on the space agency's efforts to search for habitable worlds and alien life. "We know where to look. We know how to look," Stofan added during the event, which was webcast live. "In most cases we have the technology, and we're on a path to implementing it. And so I think we're definitely on the road. " [5 Bold Claims of Alien Life] Former astronaut John Grunsfeld, associate administrator for NASA's Science Mission Directorate, shared Stofan's optimism, predicting that signs of life will be found relatively soon both in our own solar system and beyond.

Many habitable environments. Zayn Malik is leaving One Direction but group continues as four-piece - BBC Newsbeat. Zayn Malik has quit One Direction, the band have confirmed in a statement. 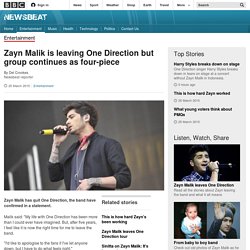 Malik said: "My life with One Direction has been more than I could ever have imagined. San Antonio Spurs become best team in NBA history. The term "best" is obviously subjective, but numbers do not lie. 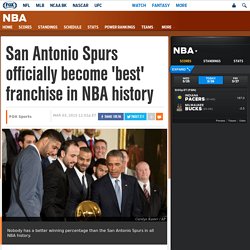 There's no arguing with wins and losses. And thanks to another absolutely dreadful season from the Los Angeles Lakers, the San Antonio Spurs now boast the highest winning percentage for any franchise in NBA history. According to the San Antonio Express-News' Dan McCarney, the Spurs are mere decimal points ahead of the Lakers, with the Boston Celtics, Phoenix Suns and Seattle Supersonics/Oklahoma City Thunder rounding out the top five. The Spurs, the report said, actually passed the Lakers a couple of weeks ago. Pablo Sandoval says weight regimen contributed to him leaving Giants. University of Phoenix has lost half its students. Stock plunges 28% - Mar. 25, 2015. Enrollment at America's largest for-profit university was about 460,000 students five years ago. 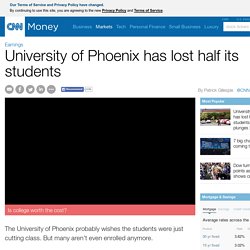 Now it's 213,000. The University of Phoenix's parent company, Apollo Education Group (APOL), announced more losses Wednesday. Its revenues and enrollment both sank roughly 14% in its latest quarter compared to a year ago. Apollo CEO Greg Cappelli tried to strike an optimistic tone, but investors gave the stock an "F" for falling. The stock tanked almost 30% Wednesday. "While we faced challenges in the second quarter, we believe Apollo Education Group has the right long-term strategy in place," Cappelli said in a statement. Related: Obama wants community college to be free. Expelled Oklahoma University student expresses &apos;deepest sorrow&apos; for racist chant.

One of two University of Oklahoma fraternity members who were expelled this month for leading a racist chant expressed his “deepest sorrow and regret” for his actions Wednesday during a news conference with one of the state's top African American lawmakers. 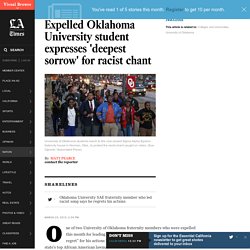 Levi Pettit, in his first public statements on the chant that drew nationwide outrage, said he understands “completely” why he was expelled and thanked University of Oklahoma President David Boren for accepting his apology. Pettit, who was a member of Sigma Alpha Epsilon, promised to “stand up against racism” moving forward. The news conference, held at a predominantly black church in Oklahoma City, had been announced by state Sen. Anastasia A. Pittman, an Oklahoma City Democrat and chairwoman of the Oklahoma Black Caucus. 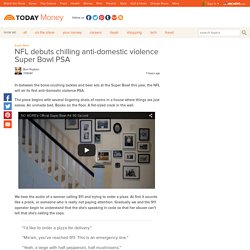 The piece begins with several lingering shots of rooms in a house where things are just askew. An unmade bed. We hear the audio of a woman calling 911 and trying to order a pizza. Bureaucratic Management. CSUCI MGT307-05 Class Collection. U.S. and Cuba Sit Down For Historic Talks on Restoring Ties. In a historic thaw of a relationship chilled since the early days of the Cold War, the United States announced plans Wednesday to restore diplomatic and economic ties with the communist island of Cuba. 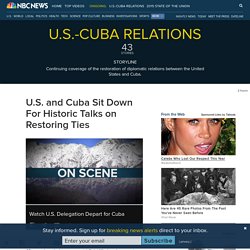 The changes came with the abrupt release of an American government contractor, Alan Gross, who had been imprisoned in Cuba for five years. He stood when his plane cleared Cuban airspace and stepped off in the United States to hugs on the tarmac. At the same time, the United States released three Cubans jailed for 15 years on spying charges, and Cuba released a U.S. spy held there for two decades. President Barack Obama declared that the United States was ending an "outdated approach" after five decades of isolation failed to accomplish the goal of a democratic and prosperous Cuba.