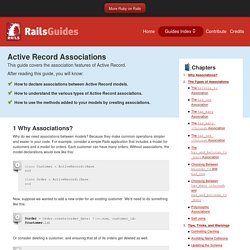 Why do we need associations between models? Because they make common operations simpler and easier in your code. For example, consider a simple Rails application that includes a model for customers and a model for orders. Each customer can have many orders. Without associations, the model declarations would look like this: Now, suppose we wanted to add a new order for an existing customer.

Or consider deleting a customer, and ensuring that all of its orders get deleted as well: With Active Record associations, we can streamline these - and other - operations by declaratively telling Rails that there is a connection between the two models. With this change, creating a new order for a particular customer is easier: Deleting a customer and all of its orders is much easier: To learn more about the different types of associations, read the next section of this guide. 2 The Types of Associations In Rails, an association is a connection between two Active Record models. 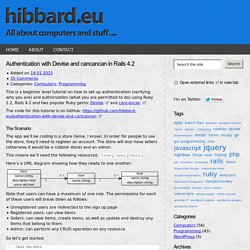 The code for this tutorial is on GitHub: The Scenario The app we’ll be coding is a store (lame, I know). In order for people to use the store, they’ll need to register an account. The store will also have sellers (otherwise it would be a rubbish store) and an admin. This means we’ll need the following resources: Item, User, Role. Here’s a UML diagram showing how they relate to one another: Note that users can have a maximum of one role. Unregistered users are redirected to the sign up pageRegistered users: can view itemsSellers: can view items, create items, as well as update and destroy any items that belong to themAdmin: can perform any CRUD operation on any resource So let’s get started. View the code on <a href=" .decimal :price, precision: 5, scale: 2. 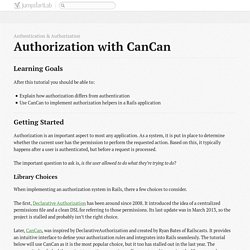 The important question to ask is, is the user allowed to do what they’re trying to do? Library Choices When implementing an authorization system in Rails, there a few choices to consider. The first, Declarative Authorization has been around since 2008. Later, CanCan, was inspired by DeclarativeAuthorization and created by Ryan Bates of Railscasts. The newcomer is Pundit from our friends at elabs, the same bunch that put together Capybara. Setup Let’s try out CanCanCan. Easy Admin Interfaces with Active Admin in Rails. Application administration is a common requirement in most web applications and building one from scratch can be a daunting task. 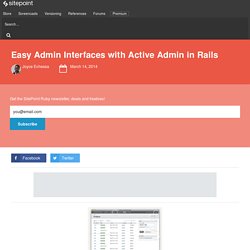 There are, however, some options that can save you from starting from nothing when creating your admin interface. We’ll be looking at one of the popular options available – Active Admin. Active Admin is a framework for building administration style interfaces. With little effort, you can create an admin interface that enables you to manage your data and it is highly customizable. We will be looking at how to set up and customize it in a Rails 4 application. You should note that, at the date of writing this tutorial, there isn’t yet an official release that supports Rails 4 (version 1.0.0 which is in development will support Rails 4). 10 Common Rails Problems: A Programming Tutorial. Ruby on Rails (“Rails”) is a popular open source framework, based on the Ruby programming language that strives to simplify and streamline the web application development process. 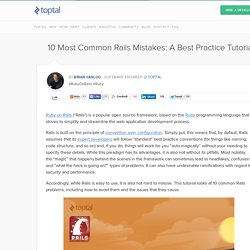 Rails is built on the principle of convention over configuration. Simply put, this means that, by default, Rails assumes that its expert developers will follow “standard” best practice conventions (for things like naming, code structure, and so on) and, if you do, things will work for you “auto-magically” without your needing to specify these details.

While this paradigm has its advantages, it is also not without its pitfalls. Most notably, the “magic” that happens behind the scenes in the framework can sometimes lead to headfakes, confusion, and “what the heck is going on?” Types of problems. Accordingly, while Rails is easy to use, it is also not hard to misuse. Common Mistake #1: Putting too much logic in the controller. Authentication with Devise and cancancan in Rails 4.2 - hibbard.eu. Multiple Types of Users on Ruby on Rails. Devise CanCanCan rolify Tutorial · RolifyCommunity/rolify Wiki. Devise + CanCanCan + rolify Tutorial This Tutorial shows you how to setup a Rails >=3.1 application with a strong and flexible authentication/authorization stack using Devise, CanCanCan and rolify (3.0 and later) Installation First, create a bare new rails app. 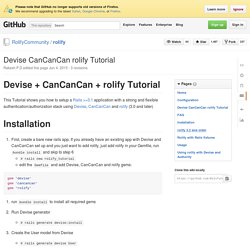