Add Google Maps Driving Directions to Your Website. Even though there are so many mapping apps and services out there to get you from point A to point B, the definitive king of maps is Google Maps. 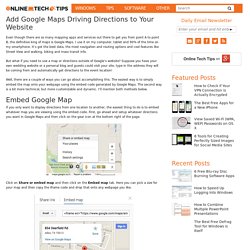 I use it on my computer, tablet and 90% of the time on my smartphone. It’s got the best data, the most navigation and routing options and cool features like Street View and walking, biking and mass transit info. But what if you need to use a map or directions outside of Google’s website? Suppose you have your own wedding website or a personal blog and guests could visit your site, type in the address they will be coming from and automatically get directions to the event location! Well, there are a couple of ways you can go about accomplishing this. Objective c - Programmatically open Maps app in iOS 6. Launch Native iOS Google Maps Via Your Web App.

"Google has introduced a Google Maps URL Scheme (comgooglemaps) to allow you launch a native iOS Google Maps from your HTML web application" View this demo in your iOS device Have you ever think of improving your web app’s user experience (UX) by enabling your users to easily search and get directions of your business? 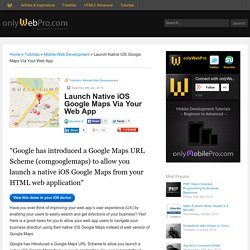 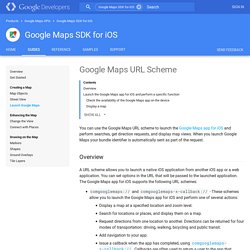 When you launch Google Maps your bundle identifier is automatically sent as part of the request. Overview. Use Geo Location to Give Your Customers Driving Directions. This tutorial is an update to a previous one in which we looked at how to show driving instructions directly on a WordPress Website using the the Google Maps API. 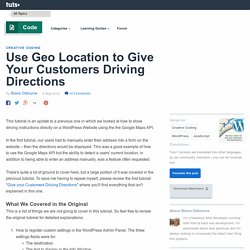 In the first tutorial, our users had to manually enter their address into a form on the website – then the directions would be displayed. This was a good example of how to use the Google Maps API but the ability to detect a users' current location, in addition to being able to enter an address manually, was a feature often requested. There's quite a lot of ground to cover here, but a large portion of it was covered in the previous tutorial.

To save me having to repeat myself, please review the first tutorial "Give your Customers Driving Directions" where you'll find everything that isn't explained in this one. This is a list of things we are not going to cover in this tutorial. Google Maps API v3 tutorial - how to make a simple local business map. How To Use HTML5 GeoLocation API With Google Maps. In this tutorial we are going to learn how to use the Geolocation API to get your current latitude and longitude, from these results we can then connect to the Google Maps API to display your location in the browser. 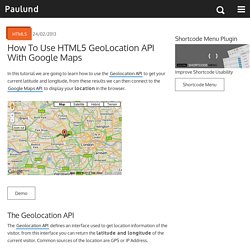 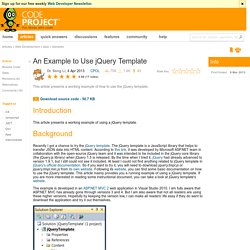 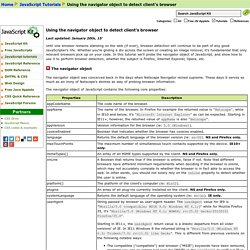 Whether you're gliding a div across the screen or creating an image rollover, it's fundamental that only relevant browsers pick up on your code. In this tutorial we'll probe the navigator object of JavaScript, and show how to use it to perform browser detection, whether the subject is Firefox, Internet Explorer, Opera, etc. JavaScript Client Detection (JSCD) Map Links. The maps URL scheme is used to show geographical locations and to generate driving directions between two points. 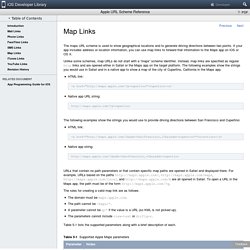 If your app includes address or location information, you can use map links to forward that information to the Maps app on iOS or OS X. Unlike some schemes, map URLs do not start with a “maps” scheme identifier. Instead, map links are specified as regular http links and are opened either in Safari or the Maps app on the target platform. The following examples show the strings you would use in Safari and in a native app to show a map of the city of Cupertino, California in the Maps app. HTML link:Native app URL string: The following examples show the strings you would use to provide driving directions between San Francisco and Cupertino: HTML link:Native app string: URLs that contain no path parameters or that contain specific map paths are opened in Safari and displayed there.

JavaScript Client Detection (JSCD) Using the navigator object to detect client's browser. Adding travel modes and waypoints to Google Maps directions. In earlier tutorials we've learned how to add google maps with directions to your site and how to add a custom marker icon and in this tutorial we'll learn how to add buttons to switch between all available travel modes (driving, bicycling, public transportation and walking).View demo The google maps documentation on travel modes tells us we can add the option to the direction request, but not how to make this a dynamic option. 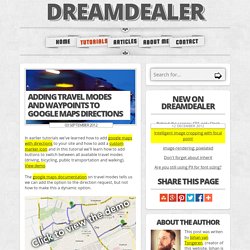 We need three parts in the HTML body. First we need a placeholder for the map: Select code<div id="map_canvas" style="width:100%; height:300px"></div> Next part is the form for the directions options (all styling removed): And last, but not least, you'll need a placeholder to display the directions in: Select code<div id="directionsPanel"> Enter a destination and click "Calculate route".   Google Maps JavaScript API   Introduction A marker identifies a location on a map. 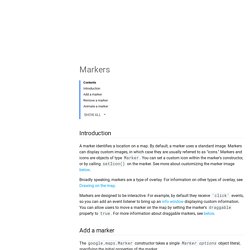 By default, a marker uses a standard image. Markers can display custom images, in which case they are usually referred to as "icons. " Markers and icons are objects of type Marker. Custom marker icons using the Google Maps API. After creating a routeplanner using the Google Maps API (v3) it would also be supercool to add a custom marker icon to mark your home, business or sportsclub. You could have guessed it: that's really easy too. Let me show you the code to create the marker shown in the screenshot above, and i'll explain what everything does later. Changing Marker Size in google maps.

Scaling marker size with marker icons from a sprite in Google Maps API v3.   Google Maps JavaScript API     Google Maps JavaScript API   How to add retina ready pin marker to your Google maps? In the picture above, you can see how better-looking pin marker is when used with retina image. This before-after screenshot was done on Ipad. On the left side Google Maps uses pin marker pin.png which is 33 pixels width and 39 pixels height (the first one) and on the right side Google Maps uses pin marker pin@2x.png which is double size as image before – 66 pixels width and 78 pixels width. That makes it – “Retina ready”. If you are not familiar with term “retina”, short and simple explanation for it would be the following – retina screen has double sized resolution, which is “squeezed” two times, thus Retina display’s pixel density (DPI) is equal to 2 and this will later will be used in code example.

Responsive Retina Ready Google Maps - Rob and Lauren. So I was work­ing on a respon­sive wed­ding web­site last week, and one of the require­ments was an inline google map with impor­tant loca­tions plot­ted on it. The require­ments also stated that I pro­vide a key with info about each, and a link for the full direc­tions, and the style needed to match the look of the site. This is how I tack­led it, and made the sucker responsive. First I toyed with the idea of the sta­tic maps api, but the allure of a fully inter­ac­tive map was much too entic­ing. After a bit of research, it looked doable, and it was! I’ll run you through each piece indi­vid­u­ally, but if you’d rather just grab the code and check it out, here is the demo. How to add retina ready pin marker to your Google maps?