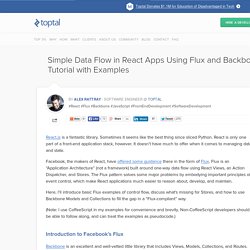 Sometimes it seems like the best thing since sliced Python. React is only one part of a front-end application stack, however. It doesn’t have much to offer when it comes to managing data and state. Facebook, the makers of React, have offered some guidance there in the form of Flux. Flux is an “Application Architecture” (not a framework) built around one-way data flow using React Views, an Action Dispatcher, and Stores.

Here, I’ll introduce basic Flux examples of control flow, discuss what’s missing for Stores, and how to use Backbone Models and Collections to fill the gap in a “Flux-compliant” way. (Note: I use CoffeeScript in my examples for convenience and brevity. Introduction to Facebook’s Flux Backbone is an excellent and well-vetted little library that includes Views, Models, Collections, and Routes. Unfortunately, leaning on Backbone alone to handle the entire application flow outside of React’s Views presents unfortunate complications.

An Overview. Integrating React With Backbone. There are so many JS frameworks! 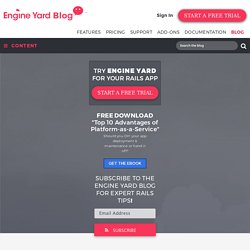 It can get tiring to keep up to date with them all. But like any developer who writes JavaScript, I try to keep abreast of the trends. I like to tinker with new things, and rebuild TodoMVC as often as possible. Joking aside, when it comes to choosing frameworks for a project, emerging frameworks just haven’t been battle-tested enough for me to recommend to clients in most cases. But like much of the community, I feel pretty confident in the future of React. Since React only provides the view layer of a client-side MVC application, I still have to find a way to wrap the rest of the application. In this post, we’ll explore the relationship between Backbone and React, by looking at one way to structure a project that uses them together. A Note About Setting Up Dependencies I won’t go over setting up all of the package dependencies for the project here, since I’ve covered this process in a previous post. Project Structure. 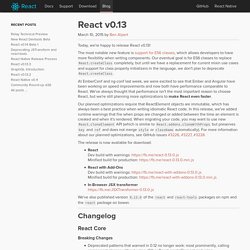 The most notable new feature is support for ES6 classes, which allows developers to have more flexibility when writing components. Our eventual goal is for ES6 classes to replace React.createClass completely, but until we have a replacement for current mixin use cases and support for class property initializers in the language, we don't plan to deprecate React.createClass. At EmberConf and ng-conf last week, we were excited to see that Ember and Angular have been working on speed improvements and now both have performance comparable to React. We've always thought that performance isn't the most important reason to choose React, but we're still planning more optimizations to make React even faster. Our planned optimizations require that ReactElement objects are immutable, which has always been a best practice when writing idiomatic React code. The release is now available for download: React Core # Breaking Changes # New Features # Deprecations #

Reactjs - Why is IE8 getting a script error when using Facebook's React.js. How to make ReactJS compatible with IE6 and IE7 ? React on Rails Tutorial - HackHands. In response to a recent client request for a richer browser side UI experience, I took a fresh look at all the recent advances in JavaScript rich client frameworks. 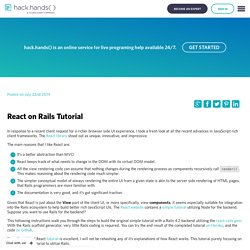 The React library stood out as unique, innovative, and impressive. The main reasons that I like React are: It’s a better abstraction than MVC! React keeps track of what needs to change in the DOM with its virtual DOM model.All the view rendering code can assume that nothing changes during the rendering process as components recursively call render(). This makes reasoning about the rendering code much simpler.The simpler conceptual model of always rendering the entire UI from a given state is akin to the server side rendering of HTML pages, that Rails programmers are more familiar with.The documentation is very good, and it’s got significant traction.

This following instructions walk you through the steps to build the original simple tutorial with a Rails 4.2 backend utilizing the react-rails gem. Tutorial Step by Step. Reactjs/react-rails. Server-rendered React components in Rails. Warning: experimental stuff ahead. 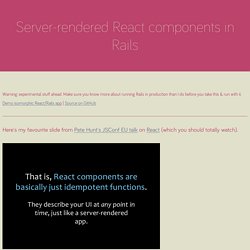 Make sure you know more about running Rails in production than I do before you take this & run with it. Demo isomorphic React/Rails app | Source on GitHub Here's my favourite slide from Pete Hunt's JSConf EU talk on React (which you should totally watch). If you render a React component with the same data, it will always return the same result. It makes absolutely no difference whether you do that rendering on the client or the server.

That brings us to the official front end buzzword of 2014: Isomorphic JavaScript. Rails meets React.js - Arkency. Hoping that there is someting out there, working, simple, that you can start using right now. 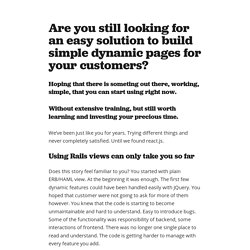 Without extensive training, but still worth learning and investing your precious time. We’ve been just like you for years. Trying different things and never completely satisfied. React.js - A guide for Rails developers.