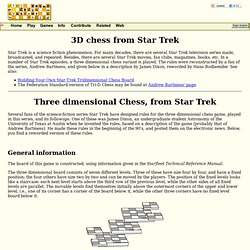 For many decades, there are several Star Trek television series made, broadcasted, and repeated. Besides, there are several Star Trek movies, fan clubs, magazines, books, etc. In a number of Star Trek episodes, a three dimensional chess variant is played. The rules were reconstructed by a fan of the series, Andrew Bartmess, and given below in a description by James Dixon, reworded by Hans Bodlaender. Millennium_3d_chess.pdf (application/pdf Object) Millennium 3D Chess* Millennium 3D Chess* Chess for the Third Millennium and Beyond! 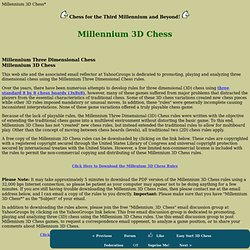