MuscleWiki. Bangladesh's 'tree man' to have surgery. Abul Bajandra has been suffering from a rare disease called epidermodysplasia verruciformis, which causes wart-like lesions, for 20 years. 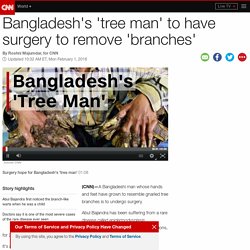 It's also known as "tree man" disease. Bajandra first noticed the peculiar branch-like growths on his hands when he was 10 years old and tried cutting them off by himself, his doctor, Samanta Lal Sen, told CNN. Now he's 30 and has one of the most severe cases of the condition ever recorded. "This is one of the most rare cases of disease that I have seen in Bangladesh, even in the world", said Lal Sen, the chief-coordinator of the surgery at Bangladesh's state-run Dhaka Medical Hospital. The skin lesions started appearing when Bajandra was 10 years old.

A rickshaw driver in a small town called Khulna, Bajandra had to give up his job as his condition got worse over time. The disease is caused by a defect in the immune system, which increases susceptibility to human papilloma virus (HPV). "The surgery is a lengthy process and will involve many [operations]. Abraham Verghese: A doctor's touch. Talithia Williams: Own your body's data. Talithia Williams: Own your body's data. Indiana Gov. extends public health emergency due to HIV. As of Tuesday, there were 135 cases -- 129 confirmed, and six preliminary -- of HIV. 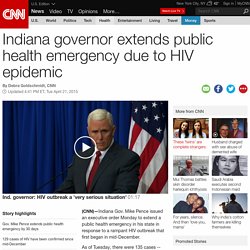 The increase has been linked to injection drug use, primarily of the prescription opioid opana. Pence issued an order in March for Scott County, which then had 79 confirmed cases of HIV since mid-December. The county normally averages about five new cases a year. "Scott County is facing an epidemic of HIV. But this is not a Scott County problem -- this is an Indiana problem," Pence said in March. Officials expect more cases as more individuals are tested, particularly because it can take up to three months for HIV to appear in a person's system after initial infection. The emergency order was first issued last month and set to expire Friday, but now will be in place until May 24. A team from the CDC Division of HIV/AIDS Prevention was working on site with state and local officials.

What is asthma? HIV/AIDS Basics. HealthCentral.com - Trusted, Reliable and Up To Date Health Information. Mayo Clinic - Mayo Clinic. Adolescent Health - Adolescent and School Health. Overview During the transition from childhood to adulthood, adolescents establish patterns of behavior and make lifestyle choices that affect both their current and future health. 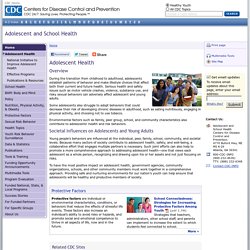 Serious health and safety issues such as motor vehicle crashes, violence, substance use, and risky sexual behaviors can adversely affect adolescent and young adults. Some adolescents also struggle to adopt behaviors that could decrease their risk of developing chronic diseases in adulthood, such as eating nutritiously, engaging in physical activity, and choosing not to use tobacco. Environmental factors such as family, peer group, school, and community characteristics also contribute to adolescents' health and risk behaviors. Societal Influences on Adolescents and Young Adults Young people's behaviors are influenced at the individual, peer, family, school, community, and societal levels. Protective Factors. KidsHealth - the Web's most visited site about children's health. National Institute on Drug Abuse (NIDA)

ZygoteBody™ BioDigital Human: Anatomy and Health Conditions in Interactive 3D. Health and Wellness Resource Center - Home. Family Tree Magazine - The Leading Family History Magazine. Exploring Daily Life throughout History : How Did They Live? Primary Sources on the Web One of the best ways to get to know a historical place and time is by reading accounts written by people who lived during that time. 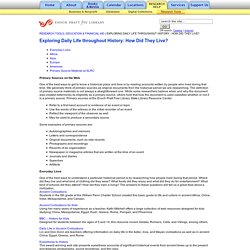