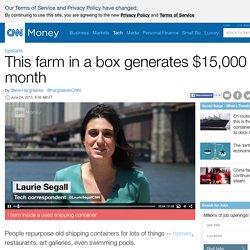 On a vacant lot near Boston's Logan Airport, Cooney is using four former freight containers -- plus one at another location -- to grow some 30,000 heads of lettuce, herbs and other leafy greens. "I'm not really a farmer," said the 61-year-old Cooney, who ran software companies before starting Corner Stalk farms in 2013. "But it's more interesting than a desk job. " If 30,000 heads of lettuce sounds like a lot, it is -- and it's the reason why he's able to run a successful farm in one of the country's most expensive cities. The containers come from Freight Farms, a Boston-based startup that outfits the boxes with lights, growing racks and irrigation systems -- creating what are essentially super efficient growing machines. The boxes themselves are former freezer containers that were used to ship meat, so they're insulated against the heat and cold.

CNNMoney's Upstart 30: The Simplifiers And it churns out the plants. 'Magic rabbit' nears extinction in China. Rarer -- and some would argue cuter-- than the panda, there are less than 1,000 of these teddy bear-like creatures living in the Tianshan mountain range in the Xinjiang region of northwestern China, says conservationist Li Weidong. 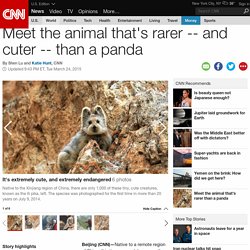 Li discovered the pika, formally known as Ochotona iliensis, in 1983 and named it after his hometown, Ili. Last July, Li spotted and photographed the elusive creature for the first time since the early 1990s. He estimates its numbers have declined by almost 70% since its discovery. "I discovered the species, and I watched as it became endangered," he told CNN. "If it becomes extinct in front of me, I'll feel so guilty. " In 2008, the animal was listed as endangered by the International Union for Conservation of Nature but there's no official organization or team dedicated studying or protecting it, according to Li. Shrinking habitat The Ili pika photographed by Li Weidong in July 2014. Ecology - Amazing Science Online! Ecology is the study of organisms and their interaction with the environment. 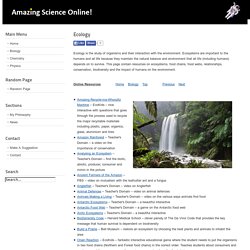 Www.pbs.org/teachers/sciencetech/inventory/ecology-912-interactiveonlineactivity.html. Source: NPR: Climate Connections Investigate the roots and hazards of climate change while exploring this interactive world map by topic or by region. 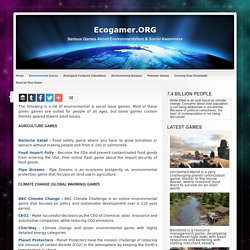 Most of these green games are suited for people of all ages, but some games contain themes geared toward adult issues. Bacteria Salad - Food safety game where you have to grow tomatoes or spinach without making people sick from e. coli or salmonella. Food Import Folly – Become the FDA and prevent contaminated food goods from entering the USA. Free online flash game about the import security of food goods. Pipe Dreams - Pipe Dreams is an economic prosperity vs. environmental protection game that focuses on land use in agriculture. BBC Climate Change - BBC Climate Challenge is an online environmental game that focuses on policy and sustainable development over a 110 year period. CEO2 - Make successful decisions as the CEO of chemical, solar, insurance and automotive companies while reducing CO2 emissions. Clim’Way - Climate change and green environmental game with highly detailed energy categories.