How I excel as a female entrepreneur in the tech space - PRSUIT. Let’s get over ourselves, ladies. 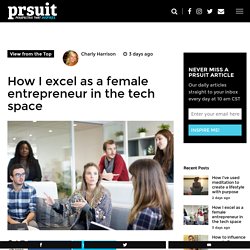 This is my story as the female founder of a tech startup, which has managed to raise over £500,000 in just 12 months without a single active user (yet). I have noticed a lot of female entrepreneurs being rather negative about how much harder it is for women to get ahead as entrepreneurs, especially in the tech industry but as controversial as this sounds, I would have to disagree. I recently traveled from London to beautiful Lisbon to attend the Web Summit tech conference (the biggest in Europe) and was invited to a ‘Women in Tech’ event, which I felt rather obliged to attend for obvious reasons. I realize I’m unlikely to make many new friends by saying this but it really did feel like a suffragette feminist rally. First of all, since when was being ‘different’ such a bad thing? So You Want to be a Data Scientist. There is no question that comes up more frequently than ‘how do I become a data scientist’. 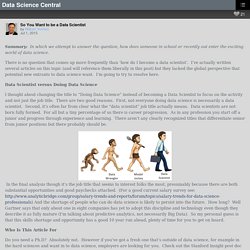 I’ve actually written several articles on this topic (and will reference them liberally in this post) but they lacked the global perspective that potential new entrants to data science want. I’m going to try to resolve here. Data Scientist versus Doing Data Science I thought about changing the title to “Doing Data Science” instead of becoming a Data Scientist to focus on the activity and not just the job title. There are two good reasons. In the final analysis though it’s the job title that seems to interest folks the most, presumably because there are both substantial opportunities and good paychecks attached.

Who Is This Article For Do you need a Ph.D? However, this article is definitely not written for Ph.Ds. Streaming in the Extreme — The Ramp. Are you ready to start streaming all the events in your business? 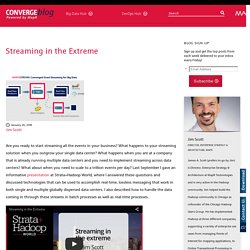 What happens to your streaming solution when you outgrow your single data center? What happens when you are at a company that is already running multiple data centers and you need to implement streaming across data centers? What about when you need to scale to a trillion events per day? Last September I gave an informative presentation at Strata+Hadoop World, where I answered these questions and discussed technologies that can be used to accomplish real-time, lossless messaging that work in both single and multiple globally dispersed data centers. I also described how to handle the data coming in through these streams in batch processes as well as real-time processes. What Does “Streaming to the Extreme” Really Mean? You’re able to support a trillion events every day. What’s Under the Hood of a Streaming System? Messaging persistence/messaging platform. Streaming engine. Logical Dataflow Putting Goals in Perspective Qpid.

Digital transformation: Expect massive job cuts, says Gartner senior VP. Don’t bother protecting jobs that are going to go away anywayExplosive growth in sensor deployments in the upcoming decade THE Internet of Things (IoT) has been one of the key drivers for digital transformation, and Gartner Inc senior vice president and analyst Dale Kutnick (pic above) predicts that a rapid spread of physical sensors will take place on a global scale in the next five to 10 years. 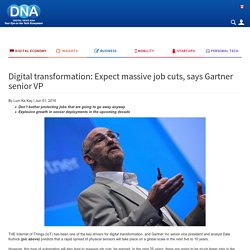 However, this type of automation will also lead to massive job cuts, he warned. In the next 25 years, there are going to be much fewer jobs in the global market, he told a media briefing in Kuala Lumpur on May 31. “Agriculture is already moving towards remote control vehicles, whether it’s for harvesting or planting. So it’s pretty autonomous, meaning fewer farmers will be needed. Speaking on the prospect of digital businesses in Malaysia, Kutnick said it is “down to the industrial policy of the country.” Block Chain 2.0: The Renaissance of Money. From 2008 to date, no other technology has been the subject of such fervent debate. 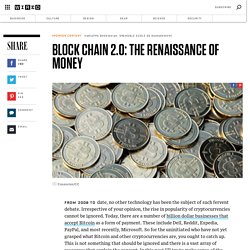 Irrespective of your opinion, the rise in popularity of cryptocurrencies cannot be ignored. Today, there are a number of billion dollar businesses that accept Bitcoin as a form of payment. These include Dell, Reddit, Expedia, PayPal, and most recently, Microsoft. So for the uninitiated who have not yet grasped what Bitcoin and other cryptocurrencies are, you ought to catch up. This is not something that should be ignored and there is a vast array of resources that explain the concept. Elements of Protocol Commonality: TCP/IP and the Block Chain In December 1974, Vint Cerf and Robert Kahn designed something revolutionary: the TCP/IP Internet network protocol. A protocol is like manners. In a similar way, TCP/IP was first developed as a way for any computer to connect and communicate with the ARPANET.

But the base technologies have remained unchanged.

What the Internet looks like: The undersea cables wiring the ends of the Earth.