We bring to you, a collection of soul-touching stories that will move you deeply, inspire you, educate you, make you laugh, and most importantly, get inside your hearts and stay there forever!

God is Always Watching - Heart touching story by soultouchstories. An Encounter of a King with a Monk- Moral Story- Soul Touch. One day a king decided to go hunting in a jungle with some of his ministers. 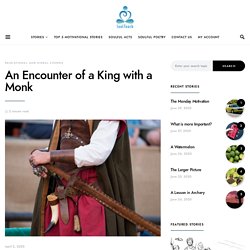 They wandered too deep in the forest and saw a small hut in the middle of the woods. A monk lived there with some of his disciples. The king decided to take some rest there. While they were sitting there, the king said to the monk, “Can you tell me where is hell and heaven? I have read and heard many philosophical answers. The monk looked at the king and said, “Who do you think you are?” Two Friends on an Island- Read Moral Story at Soul Touch. Two best friends Jack and Alice were on a cruise ship along with hundreds of people on a beautiful sunny day. 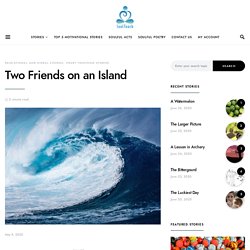 A light breeze was blowing over the tranquil and calm water of the ocean, and everyone was having a pleasant time. But as destiny had it, suddenly the breeze turned into a violent storm, and soon it started raining. This storm was the last thing Jack and Alice remembered when they woke up on a tiny island. They waited for someone to arrive at the island in their search for many days but in vain. Both of them were hungry, exhausted, scared, and frustrated by that time. So they mutually concluded that they should depart and let their destinies take their courses. Freeze - Soultouch. On an ordinary evening, Santa came out of his office building after completing his shift. 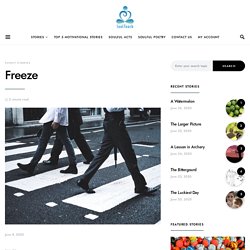 His home was just at a 10-minute walking distance from his office. And on most days, Santa preferred to walk to the office as well as back home as well as instead of driving. This day, too, he was on his way home. He was exhausted and somewhat unconscious of his surroundings. Just then, he heard a voice, “Freeze!” A Wise Minister- Read Educational Story at Soul Touch. One day a king was taking a stroll in his orchard with one of his most trusted ministers. 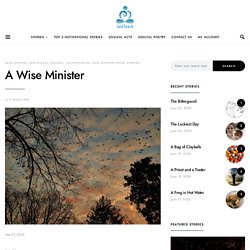 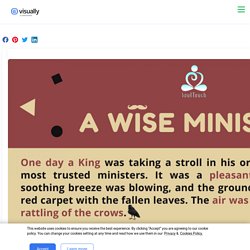 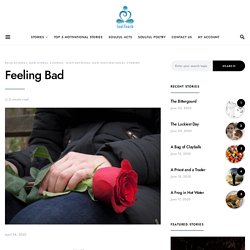 We knew each other from the first day of college. Also, I knew that he liked a beautiful girl from that very first day. We spent our days in the big labs amid chemicals and studying their characteristics and reactions. After classes, we rushed to the Canteen, where that girl remained the hot topic of Jason’s imaginations and conversations. Just before the last month of our graduation, my other friends and I persuaded Jason to go and try his luck with the girl, “The whole class is aware of your obsession with her. Jason also agreed and decided to give it a try. The whole class was watching it all happen.

But to everyone’s surprise, she said no. Top 5 Motivational Stories - Soultouch. Elvis arrived at an airport in Delhi, India. 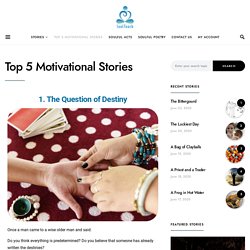 He rented a taxi from the airport to reach an address on time. The streets of Delhi were busy, but it was not surprising as he had visited India many times in the past also. His taxi stopped at a traffic signal, and Elvis’s gaze fell on a 10-year old boy. Soiled hair and brown face with big bewitching eyes, he was not wearing anything but a pair of trousers. The boy slipped his right hand into his pocket and took out a sandwich and took a bite. The dog instinctively sniffed that piece of bread and then ate it swiftly.

The Parameters of Intelligence/Motivational Story/Soul Touch. A young graduate was desperately looking for a job. 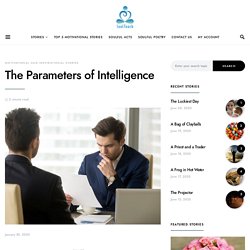 He saw an advertisement in a newspaper for the urgent requirement of an agent in a reputed insurance company. On the scheduled day, he, along with other candidates, arrived at the mentioned address on time for the interview. As luck would have it, he got selected for the job. And the panel asked him to provide his email address for completion of the formalities. But he had never owned a computer nor an email. The Richest Man in the Valley- Read Moral Story- Soul Touch. Once there lived a man named Gabriel in the Rhone Valley in France. 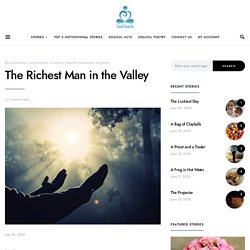 He owned the major part of the land of the valley, which is famous for the exceptional quality of grapes. Gabriel was very well aware of the fact that he was the richest man in the valley and never missed an opportunity to boast about his wealth. Two Apples- Read Educational Story at Soul Touch. One day Sam was sitting with his wife outside his house. 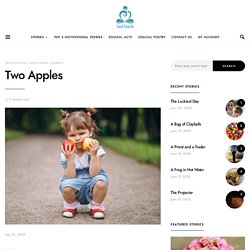 He was happy and chattering with his wife when his seven-year-old daughter came running out of the house. She had two apples, each in one hand. Pin on marriage stories. The Secret of a Dying Old Man- Marriage Story at Soul Touch. Last month Sandy paid a visit along with his mother to his eighty-year-old maternal uncle. Sandy had a distinct impression of his uncle in his memory from the days he used to visit him with his mother. His uncle was a handsome man with sparkly eyes, a well-sculpted face, and, most importantly, full of life and youth at that time. But on the hospital bed, his uncle looked nothing like the person Sandy remembered.

He was now a skeleton of bones with dull eyes. “Time is indeed a powerful thing,” Sandy said to himself. The Art of Complaining- Read Motivational Story- Soul Touch. Once a farmer named Ramu lived in a village in northern India. It was the month of July, and Monsoon had just paid a visit to Northern India. Every single pothole had turned into a pool brimming with the rainwater. Ramu had to go to the market to sell the season’s harvest and buy the seeds for the coming harvest season. He packed his grain in the large sacks, loaded them on his cart, and set out for the market. On his way, suddenly, one wheel of his cart got stuck in the mud. Ramu’s bulls tried and tried but could not pull the cart out of the mud. In frustration and anger, he hit the cart and cursed God, “Why does it have to happen to me? Two Friends and a Wild Dog- Read Moral Story at Soul Touch. Once two friends named Santa and Banta were passing through a forest. They suddenly heard the crying sound of an animal.

Both of them headed in the direction from where the cries were coming. Just a few meters away, they found a wild dog entangled in wires. The dog was apparently hurt and crying out of pain. While Santa instantly jumped forward to help the dog, Banta kept standing away and warned his friend, “Santa, don’t behave like a child. Banta’s warnings fell flat on Santa’s ears. First, he tried to calm the distressed dog with hand gestures and then started patting him slowly. An Innocent Heart- Read Educational Story at Soul Touch. Yesterday evening my brother called me over the phone. He was crying insanely. I knew that something big had happened because I had never seen him crying in my whole life. He is a strong man and has a “know it all” attitude. I begged him, “Berry, for God’s sake, please tell if everything is alright. You are scaring me. The Other Side of the Wall - Soultouch. A young woman named Ridhima lived next to my house. Gardening was Ridhima’s first love and probably the last too.

One day she was passing by a nursery where she saw the most vibrant and beautiful flowers she had ever seen. She liked it so much that she immediately decided to grow them in her garden. She planted the creeper near the foot of the wall of her garden and watered and nurtured it daily. Within a few months, the creeper grew 3-4 feet long. But many weeks passed, and still, there was no sign of flowers.Nevertheless, Ridhima kept watering and nurturing the creeper with compost as well as with love.

One day she was very upset about something. At that moment, it hit her that all her efforts were in vain, and the creeper was never going to bear flowers. The Temple Bell - Soultouch. A Wise Minister - Soultouch. The Box of Marbles- Read Educational Story at Soul Touch. When Sandy was six-years-old, he visited his grandparents along with his parents at Christmas. There he met his cousin Sansa who was five years old at that time.

Sam was very much happy to meet someone of his age, and Sansa too enjoyed his company. Two Apples - Soultouch. The Secret of Success- Read Educational Story at Soul Touch. A young scientist with revolutionary work in the field of nanotechnology got invited on a talk show. The host complimented him about the significant accomplishments in such a short time and asked, “Did you ever feel discouraged? What was the secret that kept you persistent in the pursuit of new researches.” A trip to a Village- Heart Touching Story at Soul Touch. Touching Heart Story- A Friend and a Guide- Soul Touch. One day a six-year-old boy saw his grandfather with folded hand near his heart, eyes closed and whispering something to himself.

Top 5 Motivational Stories at Soul Touch by soultouchstories. Soul Touch is the One-Stop to Read Touching Heart Stories. Courage- Heart Touching Story / Motivational Story. There is a biodiversity preserved area near my house. Everyone in the city refers to it as “The Ridge.” It is the only green place in my otherwise polluted city. A Stroll in the Forest - Soultouch. A Trip to a Village - Soultouch. Grandfather's Pet - Soultouch. A few years back, Julian, along with his elder sister Arya went to his grandparents’ house in a small village during the summer break. One day, Julian found his grandfather’s slingshot in an old box. He took that slingshot without telling anybody and went in the woods to play with it. He had never tried to shoot or hit anything. After trying his luck with the slingshot for a few hours, he got tired. Julian started walking back to his house. Soul Touch- Read Funny Stories and Add Humour to Your Life.