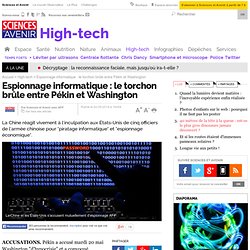 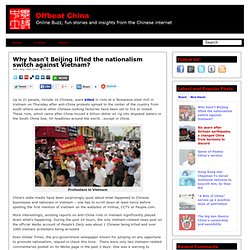 These riots, which came after China moved a billion–dollar oil rig into disputed waters in the South China Sea, hit headlines around the world….except in China. Business, Science and Beyond. Anti-Chinese Sentiment on Rise in Myanmar. The Shwe pipeline shaves an angry bald strip across the red clay hills and disappears into the morning mist. 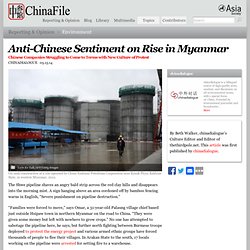 A sign hanging above an area cordoned off by bamboo fencing warns in English, “Severe punishment on pipeline destruction.” “Families were forced to move,” says Omar, a 31-year-old Palaung village chief based just outside Hsipaw town in northern Myanmar on the road to China. “They were given some money but left with nowhere to grow crops.” No one has attempted to sabotage the pipeline here, he says, but further north fighting between Burmese troops deployed to protect the energy project and various armed ethnic groups have forced thousands of people to flee their villages.

China News, Analysis, Culture, Environment, Media. Netizens Complain That Chinese Government Was Slow to Respond to Violence in Vietnam. Chinese Lash Out at U.S. Spying Indictment. Is China's hacking different from the NSA's? Analysis Why China hacks US China and America both engage in cyber espionage, so why is the US so upset about Chinese hacking? 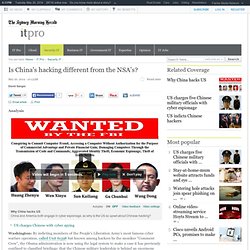 US charges Chinese with cyber spying Washington: By indicting members of the People's Liberation Army's most famous cyber warfare operation, called Unit 61398 but known among hackers by the moniker "Comment Crew", the Obama administration is now using the legal system to make a case it has previously confined to classified briefings: that the Chinese military leadership is behind an enormous organised campaign to steal American intellectual property and designs for its own profit.

For two years now, President Barack Obama and his aides have declared that when the US spies on China, its goals are sharply different from those of the Chinese who engage in espionage. Former NSA contractor Edward Snowden. Advertisement In fact, even in the US the line has occasionally blurred. Companies can also be targets. But such reasoning is rejected by former American officials. China Labour Bulletin. US Indicts 5 PLA Officers For Hacking, Economic Espionage.

In an unprecedented move, the U.S. 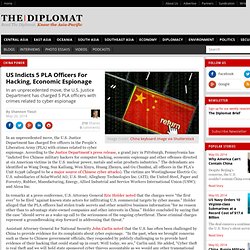 Justice Department has charged 5 PLA officers with crimes related to cyber espionage In an unprecedented move, the U.S. Justice Department has charged five officers in the People’s Liberation Army (PLA) with crimes related to cyber espionage. According to the Justice Department’s press release, a grand jury in Pittsburgh, Pennsylvania has “indicted five Chinese military hackers for computer hacking, economic espionage and other offenses directed at six American victims in the U.S. nuclear power, metals and solar products industries.” The defendants are identified as Wang Dong, Sun Kailiang, Wen Xinyu, Huang Zhenyu, and Gu Chunhui, all officers in the PLA’s Unit 61398 (alleged to be a major source of Chinese cyber attacks). In remarks at a press conference, U.S. Assistant Attorney General for National Security John Carlin noted that the U.S. has often been challenged by China to provide evidence for its complaints about cyber espionage. What the US Prosecution of Chinese Military Hackers Says About US–China Relations.

In a forceful series of statements Monday, the United States Department of Justice brought charges against five members of an elite cyberhacking squad in the Chinese military, who they accused of pilfering vast amounts of secret trade information from American companies for years. 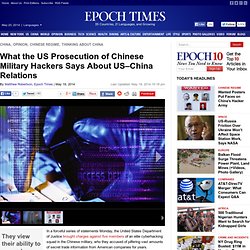 The move has been called “unprecedented,” not least of all because it is a distinct departure from the usual approach the United States takes toward its relations with The People’s Republic of China, where strong emphasis is put on cooperation and slogans like “win-win.” While the United States and China like to focus on their common interests, the current indictment shows clearly that beneath that hopeful facade a sharp power rivalry continues to play out.

In many ways the indictment is just a small part of a much larger problem: The cases of espionage discussed are a tiny fraction of the Chinese regime’s vast infiltration, both cyber and otherwise, of U.S. companies in order to steal their technologies. A Peek at the Chinese Army Unit Accused of Hacking U.S. Companies - China Real Time Report. Etats-Unis annoncent premières accusations contre l'étranger dans le cadre de cyberspying - Le Washington Post. The Obama administration “will not tolerate actions by any nation that seeks to illegally sabotage American companies and undermine the integrity of fair competition in the operation of the free market,” Attorney General Eric H. 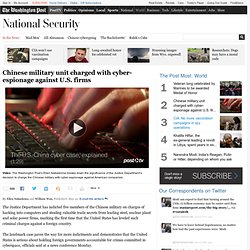 Holder Jr. said. The decision to confront China grew out of a White House strategy formulated two years ago to impose increasing costs on Beijing if it didn’t respond to requests to stop its widespread hacking for commercial advantage. The indictment is intended to address what President Obama and senior intelligence officials have called one of the top threats to national and economic security, with an estimated annual cost to the U.S. economy that ranges from the tens of billions of dollars to more than $100 billion. The criminal charges provoked a response from Beijing, which said Monday that it was suspending high-level cyber talks with the United States that began in June. China has summoned the U.S. ambassador over the hacking charges. 5 en Chine Armée des États-Unis face à des accusations de cyberattaques.