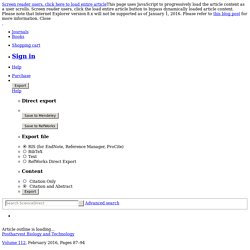 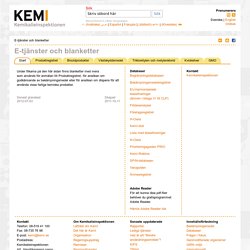 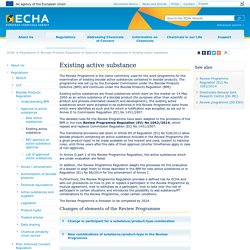 The programme was set up by the European Commission under the Biocidal Products Directive (BPD) and continues under the Biocidal Products Regulation (BPR). Existing active substances are those substances which were on the market on 14 May 2000 as an active substance of a biocidal product (for purposes other than scientific or product and process-orientated research and development). The existing active substances which were accepted to be examined in the Review Programme were those which were identified as such and for which a notification was accepted, as set out in Annex II to Commission Regulation (EC) No 1451/2007. 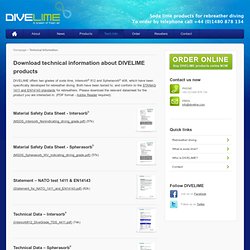 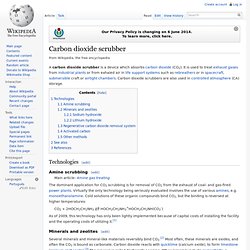 It is used to treat exhaust gases from industrial plants or from exhaled air in life support systems such as rebreathers or in spacecraft, submersible craft or airtight chambers. Carbon dioxide scrubbers are also used in controlled atmosphere (CA) storage. Technologies[edit] Amine scrubbing[edit] The dominant application for CO2 scrubbing is for removal of CO2 from the exhaust of coal- and gas-fired power plants.

As of 2009[update], this technology has only been lightly implemented because of capital costs of installing the facility and the operating costs of utilizing it.[1] Minerals and zeolites[edit] Several minerals and mineral-like materials reversibly bind CO2.[2] Most often, these minerals are oxides, and often the CO2 is bound as carbonate. Carbon dioxide removal. Carbon dioxide removal (CDR) methods refers to a number of technologies which reduce the levels of carbon dioxide in the atmosphere.[1] Among such technologies are bio-energy with carbon capture and storage, biochar, direct air capture, ocean fertilization and enhanced weathering.[1] CDR is a different approach than removing CO2 from the stack emissions of large fossil fuel point sources, such as power stations. 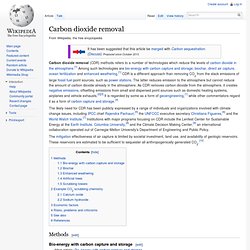 The latter reduces emission to the atmosphere but cannot reduce the amount of carbon dioxide already in the atmosphere. As CDR removes carbon dioxide from the atmosphere, it creates negative emissions, offsetting emissions from small and dispersed point sources such as domestic heating systems, airplanes and vehicle exhausts.[2][3] It is regarded by some as a form of geoengineering,[1] while other commentators regard it as a form of carbon capture and storage.[4] Methods[edit] Rebreather. For diving with a rebreather, see rebreather diving. 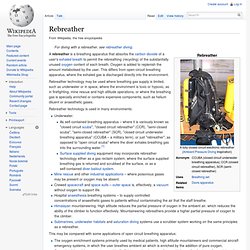 A rebreather is a breathing apparatus that absorbs the carbon dioxide of a user's exhaled breath to permit the rebreathing (recycling) of the substantially unused oxygen content of each breath. Oxygen is added to replenish the amount metabolised by the user. This differs from open-circuit breathing apparatus, where the exhaled gas is discharged directly into the environment. Rebreather technology may be used where breathing gas supply is limited, such as underwater or in space, where the environment is toxic or hypoxic, as in firefighting, mine rescue and high altitude operations, or where the breathing gas is specially enriched or contains expensive components, such as helium diluent or anaesthetic gases. Rebreather technology is used in many environments: This may be compared with some applications of open circuit breathing apparatus: General concept[edit] As a person breathes, the body consumes oxygen and produces carbon dioxide. 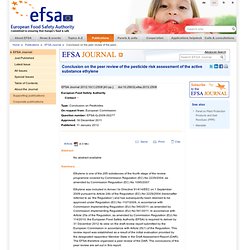 A consumer risk assessment could not be conducted. Derfor gider kunderne ikke læse dine e-mails - Jobfinder. Catalytic Decomposition Of Ethyl Alcohol. According to Berthelot,4 ethyl alcohol vapour when heated begins to decompose at 500°, yielding on the one hand ethylene and water, and on the other aldehyde and hydrogen; but secondary reactions also take place, with the formation of acetylene, ethane, benzene, naphthalene, carbon monoxide, and carbon dioxide. 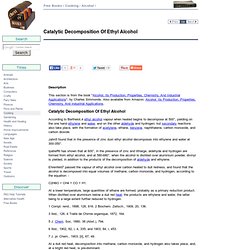 Jahn5 found that in the presence of zinc dust ethyl alcohol decomposes into ethylene and water at 300-350°. Ipatieff6 has shown that at 600°, in the presence of zinc and litharge, aldehyde and hydrogen are formed from ethyl alcohol, and at 580-680°, when the alcohol is distilled over aluminium powder, divinyl is yielded, in addition to the products of the decomposition of aldehyde and ethylene. Ehrenfeld7 passed the vapour of ethyl alcohol over carbon heated to dull redness, and found that the alcohol is decomposed into equal volumes of methane, carbon monoxide, and hydrogen, according to the equation: - 1 Compt. rend., 1898, 126, 616. 2 Biochem. 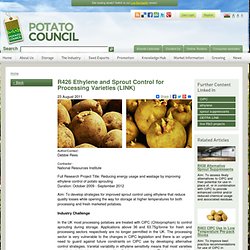 Industry Challenge In the UK most processing potatoes are treated with CIPC (Chlorpropham) to control sprouting during storage. Applications above 36 and 63.75g/tonne for fresh and processing sectors respectively are no longer permitted in the UK. The processing sector is very vulnerable to the changes in CIPC legislation and there is an urgent need to guard against future constraints on CIPC use by developing alternative control strategies. Varietal variability in ethylene sensitivity means that most varieties need to be held at low temperature for effective sprout control.

Svenske Lökodlare. Danske Kartoffelavlere. Svenske Kartoffelavlere. R412 Understanding the Role of Ethylene. Erling Olav Eriksmoen Våler i Solør - Gule Sider® Health dangers of Ethylene. The big question Many people have asked me whether ripening of bananas with chemicals is harmful to health. I understand their concern. This is because numerous artificial compounds are used in foods nowadays.

Again, banana is a favourite fruit to many, so they may want to be sure if it is safe for eating. I will address this question in depth in this article. The process of banana ripening During the growth and development period of bananas, there are many chemical and physical changes that occur. What is Ethylene Ethylene is a ripening hormone – a chemical substance produced by fruits with the specific biological action of accelerating the normal process of fruit maturation and senescence (dying or going into dormancy).