History, Travel, Arts, Science, People, Places. How Digital Detectives Deciphered Stuxnet, the Most Menacing Malware in History. It was January 2010, and investigators with the International Atomic Energy Agency had just completed an inspection at the uranium enrichment plant outside Natanz in central Iran, when they realized that something was off within the cascade rooms where thousands of centrifuges were enriching uranium. 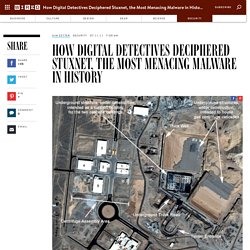 Natanz technicians in white lab coats, gloves and blue booties were scurrying in and out of the “clean” cascade rooms, hauling out unwieldy centrifuges one by one, each sheathed in shiny silver cylindrical casings. Any time workers at the plant decommissioned damaged or otherwise unusable centrifuges, they were required to line them up for IAEA inspection to verify that no radioactive material was being smuggled out in the devices before they were removed. The technicians had been doing so now for more than a month. "We were not immune to the fact that there was a bigger geopolitical picture going on. We were definitely thinking... do I really want my name to be put on this? " Jon Snyder/Wired. ICS CERT%20 %20Incident%20Response%20Summary%20Report%20 %202009 2011. Stuxnet and the Future of Cyber War - 00396338.2011.555586. Stuxnet and the Paradigm Shift in Cyber Warfare. 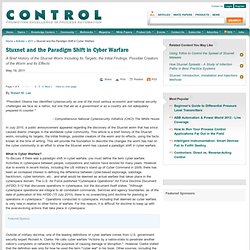 Lee "President Obama has identified cybersecurity as one of the most serious economic and national security challenges we face as a nation, but one that we as a government or as a country are not adequately prepared to counter. " - Comprehensive National Cybersecurity Initiative (CNCI) The White House In July 2010, a public announcement appeared regarding the discovery of the Stuxnet worm that has since caused drastic changes in the worldwide cyber community. This article is a brief history of the Stuxnet worm, including its targets, the initial findings, possible creators of the worm and its effects, using the facts known at the time of writing.

What Is Cyber Warfare? To discuss if there was a paradigm shift in cyber warfare, you must define the term cyber warfare. Outside of military doctrine, one of the leading definitions of cyber warfare comes from U.S. government security expert Richard A. Iran blamed for cyberattacks on U.S. banks and companies. “I don’t believe these were just hackers who were skilled enough to cause disruption of the Web sites,” said Lieberman in an interview taped for C-SPAN’s “Newsmakers” program.

“I think this was done by Iran and the Quds Force, which has its own developing cyberattack capability.” The Quds Force is a special unit of Iran’s Revolutionary Guard Corps, a branch of the military. Lieberman said he believed the efforts were in response to “the increasingly strong economic sanctions that the United States and our European allies have put on Iranian financial institutions.” U.S. officials suspect Iran was behind similar cyberattacks on U.S. and other Western businesses here and in the Middle East, some dating as far back as December.

Pentagon creating teams to launch cyberattacks as threat grows. But Alexander warned that budget cuts will undermine the effort to build up these forces even as foreign threats to the nation’s critical computer systems intensify. 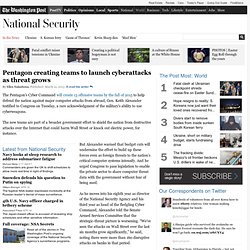 And he urged Congress to pass legislation to enable the private sector to share computer threat data with the government without fear of being sued. As he moves into his eighth year as director of the National Security Agency and his third year as head of the fledgling Cyber Command, Alexander told the Senate Armed Services Committee that the strategic-threat picture is worsening. “We’ve seen the attacks on Wall Street over the last six months grow significantly,” he said, noting there were more than 160 disruptive attacks on banks in that period. Describing an attack on Saudi Arabia’s national oil company, he said: “Last summer, in August, we saw a destructive attack on Saudi Aramco, where the data on over 30,000 systems were destroyed. Alexander said the 13 teams would defend against destructive attacks.

The Real Story of Stuxnet - IEEE Spectrum. Computer cables snake across the floor. Cryptic flowcharts are scrawled across various whiteboards adorning the walls. A life-size Batman doll stands in the hall. This office might seem no different than any other geeky workplace, but in fact it’s the front line of a war—a cyberwar, where most battles play out not in remote jungles or deserts but in suburban office parks like this one.

As a senior researcher for Kaspersky Lab, a leading computer security firm based in Moscow, Roel Schouwenberg spends his days (and many nights) here at the lab’s U.S. headquarters in Woburn, Mass., battling the most insidious digital weapons ever, capable of crippling water supplies, power plants, banks, and the very infrastructure that once seemed invulnerable to attack. Recognition of such threats exploded in June 2010 with the discovery of Stuxnet, a 500-kilobyte computer worm that infected the software of at least 14 industrial sites in Iran, including a uranium-enrichment plant.