Hundreds of Thousands Gather in Massive Protest to US Sponsored Saudi Terrorism in Yemen. Following Botched Raid, Yemen Withdraws Permission For US Ground Operations. Grisly photographs of children apparently killed in the crossfire of a 50-minute firefight during the raid caused outrage in Yemen. 8-year old American-Yemeni Nawar al-Awlaki, killed by Navy Seal Team 6 during the botched raid in Yemen. 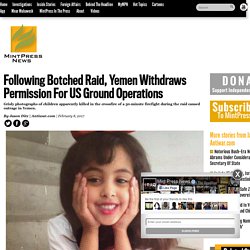 (REPORT) — The Trump Administration’s claims that a January 29 ground raid in Yemen was a “success” appear to be on increasingly flimsy ground, with the Yemeni government today announcing it has revoked permission for all future US ground operations on their soil. Though US officials downplayed the move, saying it doesn’t apply to drone strikes, it is still a nasty black eye for the administration, as the US has long managed to keep the Yemeni government unquestioningly supportive, irrespective of a string of fairly plain blunders. The January 29 raid was particularly bad, with officials saying everything that could’ve gone wrong did, and that the raid was carried out without sufficient intelligence. . © Antiwar.com Print This Story You Might Also Like.

The Pentagon Changes Its Story: Military No Longer Sure Yemeni Rebels Attacked A US Ship. The Real Reason the US Government Lets Saudi Arabia Do Whatever They Want. Saudi Arabia's atrocious war in Yemen is further proof of the consequences of the dangerous and fragile petrodollar system guiding US-Saudi relations as well as US foreign policy in the Middle East. 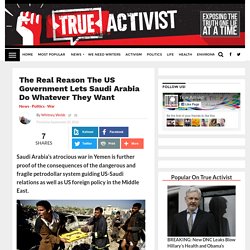 People carry the body of a child they uncovered from under the rubble of houses destroyed by Saudi airstrikes in 2015 (Credit-AP) Since last March, Saudi Arabia has been fighting a truly appalling war in Yemen in order to prevent the country’s government from changing from a Sunni Islam regime to a Shi’ite Islam regime. Though Yemen’s conflict, like Syria’s, is often labeled as a civil war, foreign armies are largely involved in the fighting there. It is essentially a proxy war between Saudi Arabia (Sunni) and Iran (Shi’ite). Saudi Arabia Is Killing Civilians With US Bombs. Saudi Arabia has engaged in war crimes, and the United States is aiding and abetting them by providing the Saudis with military assistance. 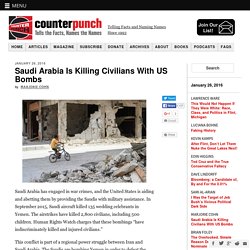 In September 2015, Saudi aircraft killed 135 wedding celebrants in Yemen. The airstrikes have killed 2,800 civilians, including 500 children. Human Rights Watch charges that these bombings “have indiscriminately killed and injured civilians.” This conflict is part of a regional power struggle between Iran and Saudi Arabia. US Drones Responsible For More Civilian Deaths in Yemen than Al Qaeda. John VibesSeptember 22, 2015 (ANTIMEDIA)— According to a U.N. report published last week, U.S. drone strikes have killed roughly 40 Yemeni civilians in the past year. 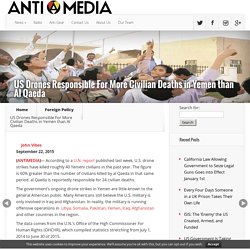 The figure is 60% greater than the number of civilians killed by al Qaeda in that same period. al Qaeda is reportedly responsible for 24 civilian deaths. The government’s ongoing drone strikes in Yemen are little-known to the general American public. Many Americans still believe the U.S. military is only involved in Iraq and Afghanistan. In reality, the military is running offensive operations in Libya, Somalia, Pakistan, Yemen, Iraq, Afghanistan and other countries in the region. The data comes from the U.N.’s Office of the High Commissioner For Human Rights (OHCHR), which compiled statistics stretching from July 1, 2014 to June 30 of 2015. Journalist Chris Woods of Airwars told VICE News he believes many of the U.S. attacks are indiscriminate and have a high risk of civilian casualties. How US and UK helped Saudi Arabia kill 500 children in Yemen.

The US and Britain are actively aiding and abetting Saudi Arabia as it indiscriminately kills thousands of civilians in Yemen. 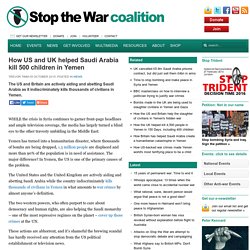 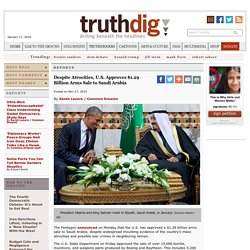 (Carolyn Kaster / AP) The Pentagon announced on Monday that the U.S. has approved a $1.29 billion arms sale to Saudi Arabia, despite widespread mounting evidence of the country’s mass atrocities and possible war crimes in neighboring Yemen. The U.S. State Department on Friday approved the sale of over 10,000 bombs, munitions, and weapons parts produced by Boeing and Raytheon. This includes 5,200 Paveway II “laser guided” and 12,000 “general purpose” bombs. “The proposed sale augments Saudi Arabia’s capability to meet current and future threats from potential adversaries during combat operations,” the Defense Security Cooperation Agency, which is part of the U.S. But Raed Jarrar, government relations manager for the American Friends Service Committee (AFSC), told Common Dreams: “Sending additional weapons to the Middle East will not stabilize the region or put an end to violence and extremism.

Rejoice with the "new" House of Saud. - Advertisement - Reprinted from Asia Times King Salman's palace coup and the Saudi royal politics(image by YouTube) DMCA It's fascinating to watch the vast, well-rewarded western army of Saudi lobbyists/stenographers singing the praises of a "traditional and conservative institution," a.k.a., the House of Saud, now embarking on a new, "assertive foreign policy. 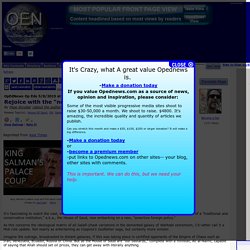 " As this concerns the ideological matrix of all Salafi-jihadi variations in the demented galaxy of Wahhabi extremism, I'd rather call it a Mob rule update. Not nearly as entertaining as Coppola's Godfather saga, but certainly more sinister. Putin Authorizes US Warplane Shootdown To Protect American Lives. World's Largest English Language News Service with Over 500 Articles Updated Daily "The News You Need Today…For The World You’ll Live In Tomorrow. 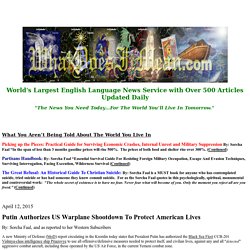 " What You Aren’t Being Told About The World You Live In Picking up the Pieces: Practical Guide for Surviving Economic Crashes, Internal Unrest and Military SuppressionBy: Sorcha Faal “In the span of less than 3 months gasoline prices will rise 500%. The prices of both food and shelter rise over 300%. (Continued) Partisans Handbook: By: Sorcha Faal “Essential Survival Guide For Resisting Foreign Military Occupation, Escape And Evasion Techniques, Surviving Interrogation, Facing Execution, Wilderness Survival (Continued) The Great Refusal: An Historical Guide To Christian Suicide: By: Sorcha Faal is a MUST book for anyone who has contemplated suicide, tried suicide or has had someone they know commit suicide.

April 12, 2015 Putin Authorizes US Warplane Shootdown To Protect American Lives By: Sorcha Faal, and as reported to her Western Subscribers. Page 2 of Article: US Geostrategic Objectives Behind War in Yemen. - Advertisement - The United States is supplying intelligence to the Saudi-led coalition bombing rebel positions in Yemen and will expedite arms supplies to the alliance, Deputy Secretary of State Tony Blinken said in the Saudi capital Riyadh on Tuesday. 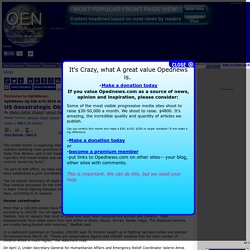 US Geostrategic Objectives Behind War in Yemen. Yemen: We did it again. - Advertisement - DECO2200 - Week 6 Revisited(image by Nicholas Taifalos) DMCA The US has unleashed a great deal of blood upon the world, with its willingness to use "bombs" as our first reaction to any situation. 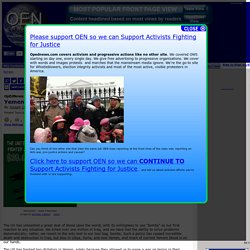 We killed over one million in Iraq, and we have lost the ability to solve problems diplomatically; rather, we resort to the only tool in our tool bag, bombs. Such a policy has caused incredible death and destruction in Iraq, but also in Libya, Syria, and now Yemen, and much of current Yemeni blood is on our hands.