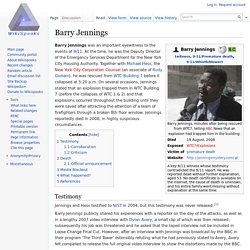 At the time, he was the Deputy Director of the Emergency Services Department for the New York City Housing Authority. Together with Michael Hess, the New York City Corporation Counsel (an associate of Rudy Giuliani), he was rescued from WTC Building 7 before it collapsed at 5:20 p.m. On several occasions, Jennings stated that an explosion trapped them in WTC Building 7 (before the collapses of WTC 1 & 2) and that explosions occurred throughout the building until they were saved after attracting the attention of a team of firefighters through a broken 8th floor window.

Jennings reportedly died in 2008, in highly suspicious circumstances. Testimony Jennings and Hess testified to NIST in 2004, but this testimony was never released.[1] Jennings testifies that when he got down to the lobby, he was astonished to find it totally ruined. Corroboration Criticism Death Barry Jennings' death remains shrouded in mystery.

Media Blackout. JULES NAUDET. October 2013 Edition The photograph above is instantly recognisable as coming from a day twelve years ago when the world changed. 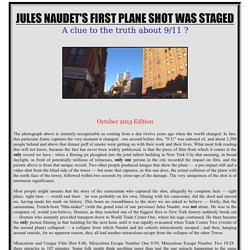 In fact, this particular frame captures the very moment it changed : one second before this, "9/11" was unheard of, and about 1,500 people behind and above that distant puff of smoke were getting on with their work and their lives. What most folk reading this will not know, because the fact has never been widely publicised, is that the piece of film from which it comes is the only record we have : when a Boeing jet ploughed into the joint tallest building in New York City that morning, in broad daylight, in front of potentially millions of witnesses, only one person in the city recorded the impact on film, and the picture above is from that unique record. 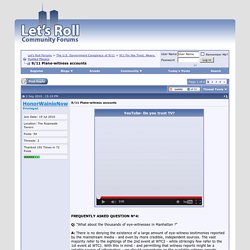 A: There is no denying the existence of a large amount of eye-witness testimonies reported by the mainstream media - and even by more credible, independent sources. The vast majority refer to the sightings of the 2nd event at WTC2 - while strikingly few refer to the 1st event at WTC1. With this in mind - and permitting that witness reports might be a reliable source of information - we should concentrate on the available witness reports. Of course, eye-witness testimonies are notoriously unreliable, particularly in the case of brief, rapidly unfolding events.

In spite of this commonly-accepted fact, many people seem to be strongly attached to what (they perceive) was reported by "thousands" of eye-witnesses in Manhattan. Listen: 9/11 Firefighters Tell How Bombs Were Going Off In The Lobby Of WTC1. Below is a video of two firefighters discussing how secondary explosions occurred immediately before the collapse of the Twin Towers, after the planes had already hit. 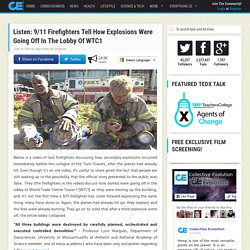 Even though it’s an old video, it’s useful to share given the fact that people are still waking up to the possibility that the official story presented to the public was false. They (the firefighters in the video) discuss how bombs were going off in the lobby of World Trade Center Tower 1 (WTC1) as they were moving up the building, and it’s not the first time a 9/11 firefighter has come forward expressing the same thing, many have done so. Again, the planes had already hit (as they explain) and the fires were already burning. They go on to state that after a third explosion went off, the entire lobby collapsed. The quotes below are very relevant here, and the same idea has been expressed by many people who’ve been directly involved with defense intelligence agencies. 9/11 Firefighter Blows Open WTC 7 Cover0-Up. JenningsMystery.com. The Collapse of WTC 7 and the Mysterious Death of Barry Jennings. 29 Oct, 2013 (This article is based on my recent book 9/11 and the New World Order, published on September 11, 2013.) 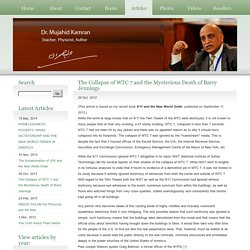 Barry Jennings Mystery. Top 10 Witnesses Who Died Suddenly. Crime A witness is someone who has firsthand knowledge about an event. 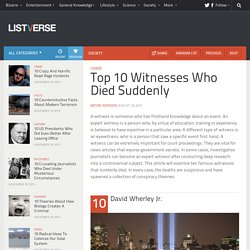 An expert witness is a person who, by virtue of education, training or experience, is believed to have expertise in a particular area. A different type of witness is an eyewitness, who is a person that saw a specific event first hand. A witness can be extremely important for court proceedings. They are vital for news articles that expose government secrets. Witnessed Event: U.S. On September 11, 2001, David Wherley Jr. was the commander in charge of the 113th Fighter Wing at Andrews Air Force base, in Maryland. On June 22, 2009, David Wherley and his wife Ann boarded a Red Line Washington Metro train (#214) in Northeast Washington, D.C. A preliminary investigation found that the accident occurred when the replacement of a track circuit component failed, which prevented certain signals from being reported. 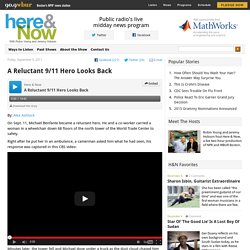