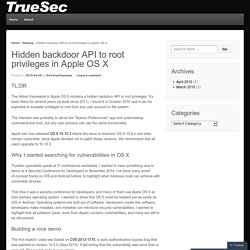 It’s been there for several years (at least since 2011), I found it in October 2014 and it can be exploited to escalate privileges to root from any user account in the system. The intention was probably to serve the “System Preferences” app and systemsetup (command-line tool), but any user process can use the same functionality. Apple has now released OS X 10.10.3 where the issue is resolved.

OS X 10.9.x and older remain vulnerable, since Apple decided not to patch these versions. We recommend that all users upgrade to 10.10.3. Why I started searching for vulnerabilities in OS X TrueSec specialists speak at IT conferences worldwide. This time it was a security conference for developers, and many of them use Apple OS X as their primary operating system. Building a nice demo.

Anonymous Operating System. Cisco purchase of CIA-funded company may fuel distrust abroad. The CIA's non-profit venture capital arm, In-Q-Tel, has been pumping millions of dollars into technology startups since its launch in 2000, meaning it's not the least bit unusual for major vendors to have acquired and assimilated one of these CIA-nurtured seedlings. 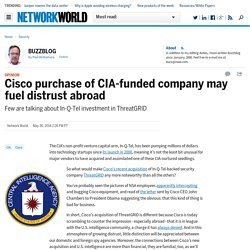 So what would make Cisco's recent acquisition of In-Q-Tel-backed security company ThreatGRID any more noteworthy than all the others? You've probably seen the pictures of NSA employees apparently intercepting and bugging Cisco equipment, and read of the letter sent by Cisco CEO John Chambers to President Obama suggesting the obvious: that this kind of thing is bad for business. DHS licenses malware forensics. Cybersecurity DHS licenses malware forensics By Mark RockwellFeb 23, 2015 The Department of Homeland Security Science and Technology Directorate has licensed a malware forensics detection and software assurance package, the second technology to emerge from the Cyber Security Division Transition to Practice program. 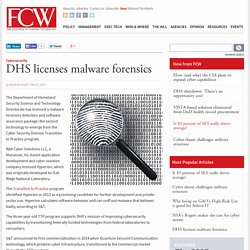 R&K Cyber Solutions LLC, a Manassas, Va. -based application development and cyber solution company licensed Hyperion, which was originally developed by Oak Ridge National Laboratory. The Transition to Practice program identified Hyperion in 2012 as a promising candidate for further development and private-sector use.

The three-year-old TTP program supports DHS's mission of improving cybersecurity capabilities by transitioning federally funded technologies from federal laboratories to consumers. S&T said the program has 24 technologies -- eight from fiscal year 2013, nine from 2014 and seven from 2015 -- that are ready for transition to the private sector. Lenovo PCs ship with man-in-the-middle adware that breaks HTTPS connections [Updated] “SSL hijacker” behind Superfish debacle imperils large number of users. Thursday's revelations that Lenovo PCs ship with adware that intercepts sensitive HTTPS-protected traffic have focused intense scrutiny on Superfish, the company that markets the intrusive software. 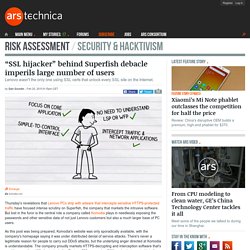 But lost in the furor is the central role a company called Komodia plays in needlessly exposing the passwords and other sensitive data of not just Lenovo customers but also a much larger base of PC users. As this post was being prepared, Komodia's website was only sporadically available, with the company's homepage saying it was under distributed denial of service attacks. There's never a legitimate reason for people to carry out DDoS attacks, but the underlying anger directed at Komodia is understandable.

The company proudly markets HTTPS-decrypting and interception software that's used by more than 100 clients, including Fortune 500 companies. The fake secure sockets layer certificate found on Lenovo machines preinstalled with Superfish came from Komodia. How “omnipotent” hackers tied to NSA hid for 14 years—and were found at last. The NSA hides surveillance software in hard drives. It's been known for a while that the NSA will intercept and bug equipment to spy on its soon-to-be owners, but the intellgency agency's techniques are apparently more clever than first thought. 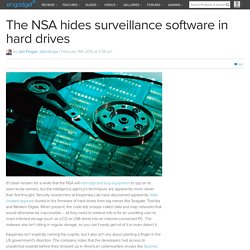 Security researchers at Kaspersky Lab have discovered apparently state-created spyware buried in the firmware of hard drives from big names like Seagate, Toshiba and Western Digital. When present, the code lets snoops collect data and map networks that would otherwise be inaccessible -- all they need to retrieve info is for an unwitting user to insert infected storage (such as a CD or USB drive) into an internet-connected PC. The malware also isn't sitting in regular storage, so you can't easily get rid of it or even detect it. Kaspersky isn't explicitly naming the culprits, but it also isn't shy about pointing a finger in the US government's direction. 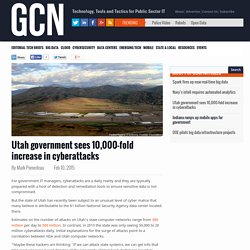 But the state of Utah has recently been subject to an unusual level of cyber malice that many believe is attributable to the $1 billion National Security Agency data center located there. Estimates on the number of attacks on Utah’s state computer networks range from 300 million per day to 500 million. In contrast, in 2013 the state was only seeing 50,000 to 20 million cyberattacks daily. Why I Hope Congress Never Watches Blackhat. From left, Chris Hemsworth and director/producer Michael Mann on the set of Blackhat. 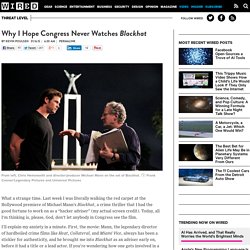 Frank Connor/Legendary Pictures and Universal Pictures What a strange time. Browsing in privacy mode? Super Cookies can track you anyway. For years, Chrome, Firefox, and virtually all other browsers have offered a setting that doesn't save or refer to website cookies, browsing history, or temporary files. 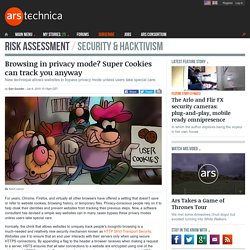 Privacy-conscious people rely on it to help cloak their identities and prevent websites from tracking their previous steps. Now, a software consultant has devised a simple way websites can in many cases bypass these privacy modes unless users take special care. VeraCrypt - Home. How The NSA Works Hard To Break Encryption Any Way It Can. Spiegel has published a detailed article, relying mostly on documents that Ed Snowden leaked, looking at the many ways in which the NSA breaks encryption (and the few situations where it still has not been able to do so). 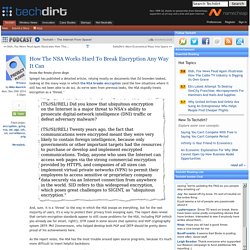 As we've seen from previous leaks, the NSA stupidly treats encryption as a "threat. " And, sure, it is a "threat" to the way in which the NSA snoops on everything, but for the vast majority of users, it's a way to protect their privacy from snooping eyes. The report does reveal that certain encryption standards appear to still cause problems for the NSA, including PGP (which you already use for email, right?) NSA collects millions of text messages daily in 'untargeted' global sweep. The National Security Agency has collected almost 200 million text messages a day from across the globe, using them to extract data including location, contact networks and credit card details, according to top-secret documents. 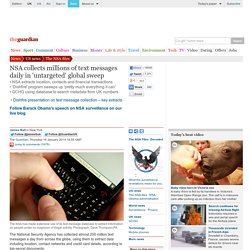 The untargeted collection and storage of SMS messages – including their contacts – is revealed in a joint investigation between the Guardian and the UK’s Channel 4 News based on material provided by NSA whistleblower Edward Snowden. The documents also reveal the UK spy agency GCHQ has made use of the NSA database to search the metadata of “untargeted and unwarranted” communications belonging to people in the UK. The NSA program, codenamed Dishfire, collects “pretty much everything it can”, according to GCHQ documents, rather than merely storing the communications of existing surveillance targets.

N.S.A. Collecting Millions of Faces From Web Images. The is harvesting huge numbers of images of people from communications that it intercepts through its global surveillance operations for use in sophisticated facial recognition programs, according to top-secret documents. The spy agency’s reliance on facial recognition technology has grown significantly over the last four years as the agency has turned to new software to exploit the flood of images included in emails, text messages, social media, videoconferences and other communications, the N.S.A. documents reveal.

Agency officials believe that technological advances could revolutionize the way that the N.S.A. finds intelligence targets around the world, the documents show. The agency’s ambitions for this highly sensitive ability and the scale of its effort have not previously been disclosed. Photo. New NSA Slides Reveal Tailored Access Run Amok. The NSA has seen the future of mass surveillance, and it appears they believe that the future lies in malware.

Earlier this week, The Intercept reported on a series of slides and memos leaked by Edward Snowden describing the NSA's "more aggressive" approach to signals intelligence, which circumvents encryption such as web browsing via HTTPS and email using PGP, by installing spyware directly onto targets' computers. Angry Birds and 'leaky' phone apps targeted by NSA and GCHQ for user data. The National Security Agency and its UK counterpart GCHQ have been developing capabilities to take advantage of "leaky" smartphone apps, such as the wildly popular Angry Birds game, that transmit users' private information across the internet, according to top secret documents. The data pouring onto communication networks from the new generation of iPhone and Android apps ranges from phone model and screen size to personal details such as age, gender and location.

Some apps, the documents state, can share users' most sensitive information such as sexual orientation – and one app recorded in the material even sends specific sexual preferences such as whether or not the user may be a swinger. Attacking Tor: how the NSA targets users' online anonymity. The online anonymity network Tor is a high-priority target for the National Security Agency. Critical networks in US, 15 other nations, completely owned, possibly by Iran. Detekt: A New Malware Detection Tool That Can Expose Illegitimate State Surveillance on YOUR Computer - GovernmentSecrets.com. Recent years have seen a boom in the adoption of surveillance technology by governments around the world, including spyware that provides its purchasers the unchecked ability to target remote Internet users’ computers, to read their personal emails, listen in on private audio calls, record keystrokes and passwords, and remotely activate their computer’s camera or microphone.

Continuous Software Assurance Marketplace. The Digital Hunt for Duqu, a Dangerous and Cunning U.S.-Israeli Spy Virus. Boldizsár Bencsáth took a bite from his sandwich and stared at his computer screen. The software he was trying to install on his machine was taking forever to load, and he still had a dozen things to do before the Fall 2011 semester began at the Budapest University of Technology and Economics, where he taught computer science. US government planes mimic cellphone towers to collect user data – report. Tracking Isis, stalking the CIA: how anyone can be big brother online. Google and Mozilla told to limit browser's ability to watch users. FBI Says Cybercriminals Keep Getting Away, Need Unprecedented Authority - GovernmentSecrets.com.

Meet “badBIOS,” the mysterious Mac and PC malware that jumps airgaps. LEAKED: German Government Warns Key Entities Not To Use Windows 8 – Links The NSA. Password Strength Meter. The beginners guide to breaking website security with nothing more than a Pineapple. What Government Should Know About 'Pass the Hash' Java 0day countdown. Java zero-day holes appearing at the rate of one a day. Help Prevent Session Hijacking. Private Web Browsing. Offensive Security Training and Professional Services.